La Petite Mort (The Little Death if you use Google translate), are a four piece band based in York. The band is: Charlie Swainston (guitar, vocals), Jared Thorpe (guitar, vocals and piano), Andreas Atkinson (bass) and Dominic Reynoldson (drums, percussion). Soundsphere caught up with the pioneers of the groove-grunge genre to talk music, lyrics and falling off buildings. 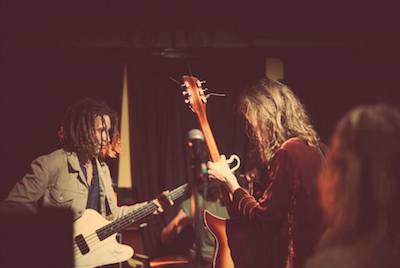 S] How did you come together and what was the initial inspiration for La Petite Mort?

LPM] “We formed in 2010. Jared and Charlie went to school together before that and so knew each other. We found Dom, and I think the moment Andy joined was the moment we realised that we were a proper band.”

S] We quite like the idea that you guys have coined the groove grunge genre, it’s pretty cool. Where did that come from? It’s a pretty accurate description of what you guys are about – what exactly is it?

LPM] “Some people say we sound a bit grungy but I think we’re pretty groovy, you know? You don’t get much funky grunge do you?”

S] What was the band’s mission statement when you first got together? Or was it just to spread good vibes throughout music?

S] You’ve played some pretty good shows and you’ve made quite an impact locally and nationally now, so what has been the highlight for you so far in your career?

LPM] “The most recent tour we did, and we proved to ourselves that it was possible. I think my favourite moment is when we played our first ever headliner in 2011.”

S] Are you guys going to be recording anything more then?

LPM] “We’re putting a new track out called ‘The Sun & Moon’ as you know, and in the next coming months we’re going to be doing some more recording at the same studio we did our EP in, with the same guys. We’ll release more music and do some music videos as well, make ourselves a bit more proper really and sort of press the reset button so everybody knows what we’re doing.”

S] What inspires you guys lyrically? Is it all done in the studio or are you inspired by going for a walk somewhere?

LPM] “I think lyrically we’re very metaphorical, a lot of the stuff we say could be interpreted a million different ways by people. Musically we’re inspired by everything. Anybody and anything. All different types of music.”

S] What about ‘The Sun & Moon’? What inspired that, what motivatd you when you were writing it?

LPM] “It was kind of a bit of a joke with the riff and stuff at first, it was a bit like Mighty Boosh we thought, then Charlie wrote lyrics for it.”

S] You all seem pretty chilled, but are there any bands you really don’t like?

LPM] “We like everybody! I don’t think there’s one band we don’t really like. Even the bands that we think are a bit sh** are still awesome in other ways. It’s really good that everybody works together in this scene, and the more people that create music the better.”

S] Have you got any interesting band stories?

LPM] “We lived together for a year so I suppose when you live together a lot of memories are made. An interesting moment for our band ever was when Charlie fell off the roof of our house and broke pretty much everything.”

S] So what are your plans for the near future?

LPM] “We’re just going to gig as much as we can. We’re in a position now where we know how to do it. Our plans for the near future are to record and release a few music videos in the next few months. We’re not really gigging too much till august, as Andy is biking to Morocco.”

S] What is it that keeps you guys so passionate? What makes you get up in the morning and want to play music?

LPM] “We love music and like sequins, velvet and tassles.”