In our next Download Festival interview, we chat to Erin and Gianluca of Life On Standby about their music and influences. 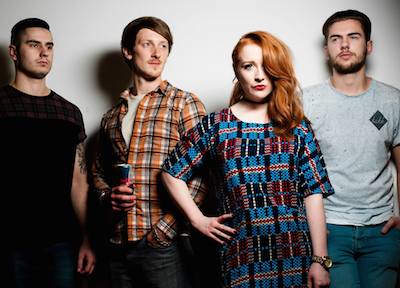 S] So how is Download going for you guys so far?

Erin] “It’s actually amazing, we’ve never been before. In fact Liam our bassist has never been to a festival before. So first festival and he’s playing! But yeah, Download is an amazing place.”

S] So how does such a powerful voice come from someone who is so tiny and petite?

E] “I don’t know, years and years of singing? I started off when I was about 9 singing in choirs then it was jazz bands, then I wanted to be Avril Lavigne, then Amy Lee; I was just influenced by other female singers. Also Gwen Stefani and Hayley Williams. Thanks for asking!”

S] What inspires the band’s music in general?

Gianluca]: “Well, I mean as a band you always try to be as original as you possibly can, but there are always influences coming from every angle. So I mean just the love of music really. For years and years we’ve played all kinds of shows and then all of a sudden you have a show of this kind of calibre and you know all those years have just paid off for that. So really it’s down to passion and I think it’s important to be inspired by as many people and as many acts as you can be and not just stick to one genre.”

S] You can tell that you really enjoy performing.

Gavin] “Yeah we really do, it’s not just a hobby for us. We really want to make a life out of doing this me and Gianluca – we’ve been friends since we were 12 or something and we always went to festivals together so playing at one together I mean it’s just amazing. So hopefully onwards and upwards from here!”

S] So does the passion come from blending genres? You can hear elements of electronica!

Liam] “I’m a bit of a jazz lover. After listening to things like Enter Shikari I’d bring it up on the Ipad and start adding electronics and synths.”

Gavin] “We have the IPad, so I’ll write a song and then I’ll take it to the guys and we have to write a song on top of that. So everyone adds a layer. Some of the samples you heard in our set, well there are actually maybe five or six synths on one track. So once we are happy with the synth sounds on the Ipad, then we will write a tune on top of that. That’s how it works.”

S] So what inspired the song ‘Shadows’?

Erin] “Well, Gavin came up with original track and when I first heard it I had an almost kind visual reaction to the sound; I thought it sounded kind of scary, a wee bit creepy. I wrote the song about being stuck in your own head as though you’re in a scary house trying to escape from someone. But essentially it’s about being stuck in your own head and trying to get away from the shadow that is lingering around you. We really like the song and we thought it was a good choice for putting into the Red Bull Studios Live at Download competition. I mean it got us into the final, which was great!”