After the April release of their second album, Destination Somewhere, Australian rockers, Massive, have been hard at work on tour. Vocalist, Brad Marr, took the time to talk with us about the album, Australia’s music scene and the band’s plans for the rest of the year. 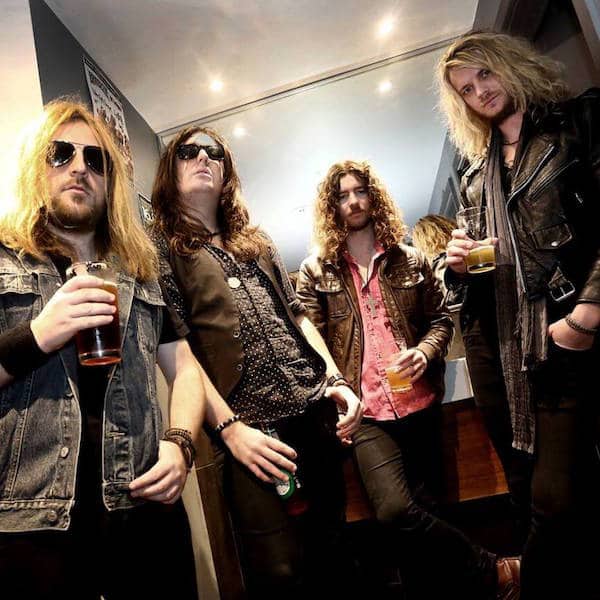 S] After all the work you’ve put in, how does it feel to have Destination Somewhere out now?

B] “It’s been a long time coming. We’ve gone through the phases of being anxious and excited and hurrying it up. We’re relieved now that it’s out and people are getting to listen to it. We’re happy with the end result. People are catching on quick and it’s cool.”

S] Tell us about the last couple of years and the biggest challenges you’ve faced as a band getting to this point.

B] “The last two years, we’ve toured a lot. We’ve toured basically non-stop here in Australia. In the last two years, it has been a bit tough. We had a new guitarist come in, and especially for a band that’s so busy, there’s no time to stop and take a step back and reload. It’s full steam ahead, the whole time. Almost every one of these songs were written while we were touring. Some of them were written in Europe and the UK while we were over there. A lot of them were written on our days off while we were touring. That’s the theme behind the album, Destination Somewhere. We don’t know where we’re going to be tomorrow, but we’re doing this thing called rock and roll and our bags are packed, ready to go. It’s not a life for everybody. It’s bloody hard sometimes. It takes a lot of energy to do it, but we actually love being on the road and touring a lot. It’s a lot of fun, as well as hard work.”

S] Australia seems pretty self-contained. There are a lot of bands that just tour Australia. You can do well, just being in Australia. As a band that’s been all over, what’s your attitude to that?

B] “I’m at a gig right now for a band called Thirsty Merc. They’ve been huge in Australia for the last ten years. They’ve never gone outside of Australia, but they’re radio royalty here, they’re huge. I’m in the car park right now and my girlfriend’s band, Tequila Mockingbyrd, is supporting them and they just tour Australia non-stop. There’s definitely a market here to do that. We’re one of those bands that doesn’t want to stay in one spot. It gets a little bit stale if you go to the same cities. There are not many major cities in Australia. There are towns along the way and we do a lot of the towns and country cities. We just get bored. We want to go overseas and see new places all the time. We have that mentality of bigger and crazier each time we go out there. There are different ways to do it. Australia’s got a great scene and we like seeing the world.”

S] ‘One for the Road’ and ‘Beaten Dog’ are both killer tracks. Can you talk to us about the inspirations behind them?

B] “Those two songs are the two that the new guitarist, Brendan contributed on the most. ‘One for the Road’ was the first riff he ever brought to us and we loved it so much that we wanted to make it the introduction to the album. He came in with a bunch of stuff that was so good that we’ve got albums and albums worth of riffs to come now. With the lyrics and meaning behind that song, it’s basically where someone’s upset you and you had a big argument. It could be a girlfriend, a boss anyone. You just crack it and say ‘stuff it, I’m going to the pub to drown my sorrows’. I’m sure that relates to people around the world. ‘One for the Road’ is about when you’ve had enough and the only way to lighten the mood is one for the road, one for the girl, one for the pain. It’s a drinking song I guess. ‘Beaten Dog’ was basically a full song that Brendan had written. He just jotted it down and we loved it. I think it was fitting to have him open and close the album. He’s probably got more insight as to what the words are about, but it’s one of those songs that you get knocked down, you pick yourself up. It’s a feel good vibe. For us, it was a way to step away from that party vibe rock and roll and show we’re multi-faceted.”

S] When can we expect you back in the UK?

B] “We’ve got a few dates booked in already. There are still a lot of gaps, so we’re trying to fill in the gaps before we announce too much. We’ll be there the third week of September. I think we’re starting in Europe and working the opposite way. Once we’ve filled up enough gas, we’ll announce the first leg of it. We’ll go in September and stay towards the end of the year.”

S] Is there anything else coming up for the band that you can tell us about?

B] “In July we’re doing a run ourselves. So we’re going to do another couple of weeks around Australia. We’ve got a couple festivals. We’re doing Hard Rock Hell in Wales. That’s a mad, crazy, fun time. We can’t wait to get back over there. We’re waiting to sign the dotted line for further things. You’ll see some big things coming up soon.”

S] What are your inspirations outside of music?

B] “I guess I can speak for the band because we spend more time together than we don’t spend together. When you live out of a van, you get to know people pretty well. We all love that drive of travel. We love being on the road and meeting people. You meet people you’d never meet. None of us want the boring nine to five lifestyle. As much as it’s music related, I think that whole excitement of being in an unknown place and not knowing who you’ll meet next is kind of the motivation behind what we do.”