For our latest band spotlight, we chat to Jack Donald, guitarist with Midnight Playlist about their music and inspirations. 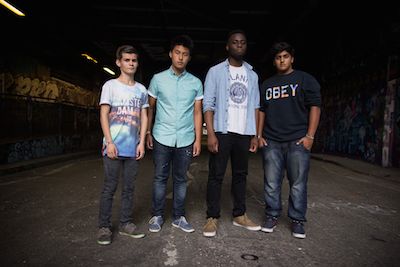 S] Hello! What are you up to today? Set the scene for me?

J] “Hey! The whole band is still in full-time education, so this really occupies most of our time – but we do our best to work around that, practicing on weekends or whenever we can. Today was pretty run-of-the-mill, between getting an education and running around trying to promote our EP before its fast-approaching release!”

S] Talk to us about the creation of ‘Built To Break’ and the inspirations behind that?

J] “The entire process of the EP from start to finish lasted roughly a year – the majority of the songs were written gradually and refined over this time. As musicians, inspiration was drawn from all over – the four of us all listen to different genres of music, though still keeping a core of key bands such as A Day To Remember and The Wonder Years which manage to work their way into our general sound and pretty much everything we write. We never sat down and said “we’re writing an EP, this is our dedicated time to do that” – it kind of just happened, it was always an end goal, but our core set of songs was constantly rotating over this period so once we were happy with our material, we bit the bullet and recorded it over the course of the week during the summer.”

S] What inspires and motivates the band outside of music – think people or places?

J] “This is a tough one – due to our aspirations as a band, our local music scene does sit at the forefront of our inspiration, but outside of that, I would have to say we have always tried to surround ourselves with people who motivate us and inspire us to better ourselves, not just as musicians but as people in general. Visiting new places always seems to kick off a creative spark in writing new material – personally, a change of environment works wonders for reflection and gaining new experiences.”

S] Can you recall the motivations behind ‘Coast To Coast’ – where were you guys when you wrote that?

J] “’Coast To Coast’ was an interesting point in our band’s development, but it really is a snapshot of where we were at the time – we were younger and more inexperienced, but willing to experiment with our songwriting and trying to craft actual credible music for the first time. It really helped us progress towards writing Built to Break, as it was that first stepping-stone in terms of gaining recording experience and developing our creative process – it may not be the greatest in its own right, but it was definitely worthwhile and a milestone of sorts in our history.”

S] In terms of touring, do you have a favourite city to visit, and why?

J] “That’s definitely something we’d love to do, we’re hoping at some point to go on tour to promote our EP to an audience outside of London, but heading North would be great – particularly for me, as I have a lot of family on the East Coast that I’m sure would be down for dropping by! As far as favourite cities go, I can’t speak for anyone else but Cape Town, South Africa has been and probably always will be my favourite city because of the memories it holds and the whole environment and feel of the place – gigging there one day would be an absolute dream.”

S] What are your main aims and goals as we approach 2015?

J] “Towards the start of next year, properly touring is something that we’re really pushing for – nothing’s been confirmed yet but it’s definitely something we’re looking into. Once we feel like we’ve gigged on this EP enough to be sick of it, it’s looking like we’ll be heading back into the studio to record a follow-up EP during the spring/summer, really pushing the envelope of what we’re capable of, sonically and as musicians.”