It’s not every day Mortiis play York. It was too good an opportunity to pass up on to grab an interview with the man himself. Even unmasked, his persona as a performer is dark and intense. In person, however, he’s altogether more approachable, and proves himself to be an amiable and articulate conversationalist. 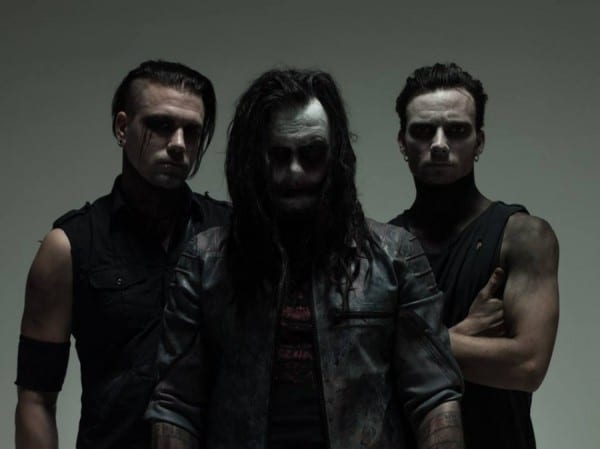 S] This is your second UK tour since the release of The Great Deceiver. Do you enjoy playing live?

Yeah, I do. Mostly in hindsight. Usually, when I’m on stage, and before I get out and go on, I’m building up so much adrenaline, and I’m so – for want of a better expression – agitated, stressed out, and really nervous. I’m as fucking scared now before I go on stage as I was the first time I was on stage twenty years ago. It’s only very much after the show I can look back and think ‘yeah, that was good’, or ‘that went well’. I do enjoy it, but it takes a lot out of me, energy-wise.

S] And how do you find UK audiences compared to others?

I like the UK. It can be kind of a rough place at times, but I like it. People have always been fairly responsive to Mortiis.

S] York seems an unusual tour destination. Was there a concerted effort to visit less frequently-gigged locations on this tour?

I told Frank who books it, ‘Let’s not do the same places as last time. Let’s try some other cities. What’s the point in coming back ten months later to the exact same places as before? And it’s not as if we’re the fucking Rolling Stones…

S] And people do seem less willing to travel these day, perhaps.

S] People are also unwilling to pay for anything these days.

Yeah. You have to offer way more now than in the past.

S] I understand you’re doing this tour with no tour manager, and in many ways with minimal support, and I’m also aware you’ve had some pretty negative experiences of the music industry in the past, with label issues being a key factor in your taking an extended break from recording not so long ago…

Well, we have a tour manager, Troy. He’s actually PIG’s tour manager, but he’s kinda taken charge, and like everyone else on this tour, we’re doing way more than we’re getting paid for.

S] So how hard is it to simply exist as a musician outside the mainstream?

It’s almost impossible when you’re at this level. If you don’t have a day-job – which I do, we all do that – we’d be homeless. You have to be very inventive to sell stuff, and if you have the possibility to do it, to take control of your art, all your copyrights and stuff, just do it yourself, man. I started out that way, back in the mid-90s, when I started putting out my solo stuff. I immediately started my own label. I put out my own vinyl, because back in those days, people were still buying vinyl. CD was kinda taking over, but I never got CDs, I didn’t like it so I just stuck with the vinyl. And now, vinyl’s back. It’s awesome. In the last three or four years, people woke up big-time to the fact that vinyl is so much cooler – and I’m not even getting into sound quality, that didn’t even matter to me, it’s just the whole physical thing.

S] How did it feel to break the deadlock and finally bring The Great Deceiver out there?

Scary. I got so used to that record being on the shelf, in progress: it’s taken this long to get out, because maybe four guys in the world had heard this album. And once things take that long you start second-guessing yourself, like ‘is it actually any good? Are people gonna like this? What if it turns out it’s a piece of shit? I’ve listened myself deaf to it, and I’m loving it, but am I fooling myself?’ So there was this safety in holding on to it and not putting it out. At least if it sucks, no-one’s going to know. But in the end, you have to let it go. It’s a much harder, angrier album than I’ve done before.

S] The Great Deceiver seems to incorporate more techno-industrial crossover elements than its predecessors. Is that a fair comment? What would you say is the defining feature of The Great Deceiver which separates it from your previous output?

I suppose so. I never really analysed anything like that. I just create stuff that’s inspired by shit that I like. And my tastes happen to lie, when it comes to that sort of music – I have a very broad taste in music – it’s not like I’ll try to sound like Led Zeppelin. This is the kind of music I love performing and love creating, so of course that’s going to be my sound. My inspirations, all my favourite records, are from the late 80s, early 90s. Skinny Puppy, KMFDM… it had a sound. That’s how I feel about The Great Deceiver, it belongs to 1995. I just wasn’t ready for that music back in ’95.

At this point, Mortiis talks at length about his appreciation of Nine Inch Nails – ‘when you saw their stuff on TV, when ‘Head Like a Hole’ came out, you didn’t forget it, but my mind just wasn’t ready for it then’, he says, and enthuses over Coil and Throbbing Gristle, Godflesh and early Earache Records releases, and how Ministry were his conduit from metal to more industrial music.

S] The videos you’ve released, particularly for the singles off the latest album, are pretty gruesome and grotesque, with a lot of blood and gore, and a recurrence of chains and a certain thread of violence.

S] What is it that draws you to these things?

The thing is, I’m not such a huge fan of horror, either. It’s just that there’s a sense of freedom in doing whatever the fuck you want. That’s a dumb statement, because it’s self-explanatory, but I just wanna do shit that fucks with people’s minds. And videos, they’re kinda boring, right? I was DIY-ing it, it’s all me, no label… I got censored a lot by labels.

S] I read in an interview with Team Rock that you wanted your videos to be disturbing. I want to flip that round an ask what disturbs or scares you?

I’m a parent now. The things that disturb me, we’re talking dark things, paedophilia, abuse. Anything to do with children not getting the life they deserve. I’m a total softie. I’ll read the newspaper and just cry because of all the tragic shit that happens all the time.

S] This is a man who channels all the violence and rage and grief into his art. I suggest that it’s often the case that the creators of the most extreme art are in person, if not the most ‘normal’, then the sanest and gentlest of people.

Yeah, probably ‘normal’ is not the wrong word to use, because we are really sensible people. We put out the weird shit, but it’s really creative. I think it’s a really healthy way to use whatever frustrations you may have. I know depression gets romanticised and all that, with goth and that, but if you’ve gone through something, it’s fucking horrible. It’s a really nice way to take that negativity and all the frustration, and put it into something constructive.