Band Spotlight: On The Ropes

For our next band spotlight, we talk to Jonny Gill of York-based pop-punkers On The Ropes about the band’s material, inspirations and more. 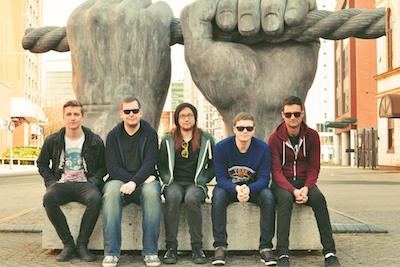 S] What led to the formation of On The Ropes?

J] “I had been doing solo stuff for a long time and had been in a few bands (though only one had ever gigged), but I had always wanted to be in a pop-punk band and I had always wanted to be a frontman. Jamie (guitarist) and Chris (ex-guitarist) who I worked with both wanted to be in a pop-punk band too. Chris and I had been in a previous band with James (ex-drummer) so asked him if he was interested and then my friend Bob joined on bass. We just wanted to have fun and write fun music. Being in a metal band was fun but it was also pretty serious.”

Demo by On The Ropes

S] How does the band push you in new ways as an artist?

J] “I’ve never had to write lyrics for a band before. That is quite scary. With my solo stuff I can just write what I want because nobody else has to like it. Writing personal stuff and hoping that the four other people in the band like it is quite a scary thing. Vocally, I sing in a bit of a higher range than I am used to and do a few shouty bits too. As a performer it gives me free reign to climb all over barriers/people. I am a big fan of a high energy show from a band. I remember having seen Gallows in 2007 and watching Frank Carter and thinking ‘If I was a frontman, that’s what I would be like’.”

S] What song from the OTR catalogue do you feel like defines where you are at as a band?

J] “Our most recent song is “These Days” and it was a step up from all of our previous songs in every way. It is everyone in the band’s favourite I think, and my friend Paul describes it as ‘the hit’. It is the first song we wrote properly with two guitarists in the band, so it really plays with that dynamic a lot more than our other songs, which were basically written for one guitar and had another guitar part thrown in almost. It is also the first song we wrote with our full current line-up.”

S] What about outside of music – what literature of films inspire the sounds?

J] “We have a song called “Holy **it, Kevin. What Did You Do To My Room” which is a reference to ‘Home Alone’. Does that count?”

S] Jonny, as someone that’s been around for a while, what do you think about the York alternative music scene?

J] “I think it’s great! It has changed a lot since I first got into it, but that will always happen. When I first started playing in the alternative scene in 2010 it was all metal and metalcore bands. The scene was really good and you would often find bands turning up to other bands’ shows and a lot of the same people were going to everything. Now it has diversified a bit, which is great. The Bastard Sons, Broken Skulls, Lyon Estates and Amongst Thieves are a few examples (southern rock, bluesy rock, pop-punk and post-hardcore respectively) that I can think of. There is a lot less straight up metal and metalcore at the moment.”

S] What inspired ‘Plenty More Ships In The Sea’?

J] “That was actually the first song we ever wrote. It was partly about the breakup of my previous band, but also partly about people trying to drag you down with them which is not cool.”

Demo by On The Ropes