Soundsphere is a pretty cool medium. We get to interview bands that we love, and it’s been pretty rad overall. We’ve done some pretty cool stuff – broke some bands (in a good way), and interviewed some icons. On our bucket list since we started (anyone else remember 2008 before we ‘sold out’ and were proper goffs?), was <PIG> and Raymond Watts. Leading up to the release of ‘The Gospel’ on September 9, we thought this was as good a time as any to catch up with the lord of lard. 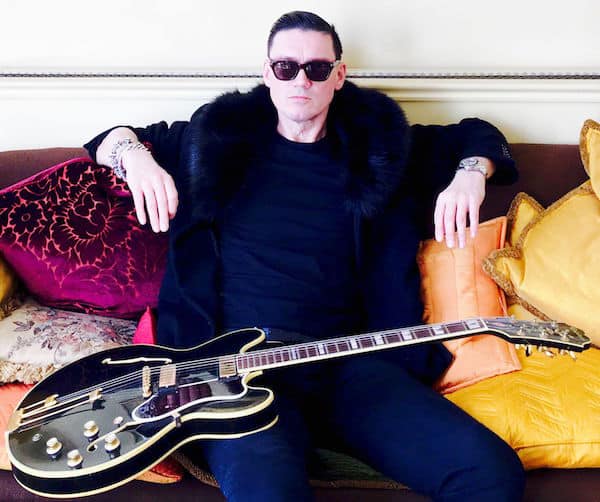 S] Hi Raymond, mate – how are you today?

Fine, thank you. Somewhat snowed under getting things in something resembling a state of order for the upcoming <PIG> American Excess Tour. But I have really good people in the engine room stoking the flames of this particular furnace. We have a pretty even distribution and division between the hard labour, and the laborious tasks of tour preparation.

S] Talk us through the development and evolution of this <PIG> record, what gave you the fire to put it together?

It was an interesting and winding road that brought about the birth of The Gospel. I was introduced to Mark Thwaite via working on a <PIG> v Primitive Race EP about three years ago. We started sending files back and forth and he introduced me to Z.Marr who was then playing with Combichrist.

We wrote what turned out to be the bulk of The Gospel, but I wasn’t entirely happy with it. Something about doing the whole thing by sending files just didn’t sit well with me. I need to be able to talk, sing, wave my arms about and communicate with people I collaborate with in a way you can’t by sending emails and files. So we had done got put on the shelf. I was happy to return to writing music for Alexander McQueen shows and for the retrospective (Savage Beauty) at the Victoria and Albert museum in London.

My old partner in swine En Esch had been over from Berlin to work on some stuff with me but then, the next thing I knew Z.Marr had left Combichrist and was in London and we’d finished the album in two weeks. Bang, just like that the first new <PIG> album for over ten years was completed. It was a kind of perfect <PIG> storm. The Gospel took on a momentum of its own and sort of made itself, not because of me but more despite me. The input from Mark, Z.Marr and En Esch was not just inspiring but immense and inestimable.

Inevitably, that has led on to a bunch of fabulous remixes for release early next year and a vinyl only available on the tour called Rise and Repent comprising of rarities, remixes and the unreleased.

S] What are you most passionate about outside of music right now – think films, or people and places for example?

Since <PIG> has risen it really has been its greedy, time-consuming and selfish old self. Apart from seeing some great stuff at the theatre recently I was really inspired by the new Switch House Tower designed by Herzog & De Meuron at The Tate Modern gallery in London. It’s fabulous, breathes, is comfortable to be in and also look out of. Rather like a really good album. Very simply put: you feel good moving in and around it.

S] What do you think of the state of industrial music right now?

I can’t really answer that as I come from a place where the word has such a different meaning that we’re speaking different languages. I used to work with Psychic TV, Foetus and Einstürzende Neubauten who actually used the tools of industry so when I became aware of the term ‘industrial’ it seemed to fit. So without meaning to be contrary or elitist, I find the term ridiculous. Especially when the label is stuck on <PIG>. I haven’t been near a chainsaw for at least two years and that was when I was living in the country getting our firewood sorted out…

S] How are you looking forward to getting back on tour, and doing this stuff live?

I am looking forward to it massively. I have the kindest, most generous and best people around me. Guenter Schulz and En Esch are truly great musicians with whom I share a short hand as we have done so much together previously. Z.Marr my co-pilot, co-producer and co-conspirator and of course the fabulous Galen Waling who will steer the ship from the drum kit. The process doesn’t just involve the musicians it also includes the extremely talented Mr. Jarred Everson responsible for all our artwork, Erie Loch the video vampire and our tour manager/torturer in chief Troy Hilton. They all go above and beyond.

S] Talk us through the inspirations behind the track ‘Found In Filth’ – what experiences inspired that one?

Found In Filth is probably inspired by having sometimes been in the gutter, and not looking at the stars so much as counting the scars. Coming to some realisation that there is redemption in being dislocated from yourself. And in this case re-connecting with myself and making music again. Maybe it should be called Solace Through Shit.

S] Are there any other artists right now out there, that you think are doing cool stuff?

Of course there are so many, but I just had a quick look at what I’ve been listening to recently and I tend to gravitate back to Arvo Part, Johnny Cash, Gorecki, Depeche Mode, Puccini, M83 . You know, the usual suspects …

S] How do you look back at your legacy, what stuff are you most proud of?

Mmm, interesting. I don’t know if proud is the right word. For a long time I enjoyed being willfully obscure and the actual process of making music has been the thing I enjoyed. But I used to be happiest when I was unhappiest. Now that’s been reversed. I’m happiest now with the stuff the stuff I’ve been happiest doing … So following on from that I’m most proud of the last thing I’ve done, and that is: The Gospel.