In our next band spotlight interview, we chat to Toby Butler of The Duke Spirit about his (and Leila Moss’) new US-based project, Roman Remains, and the influences behind their forthcoming record, ‘Zeal’. 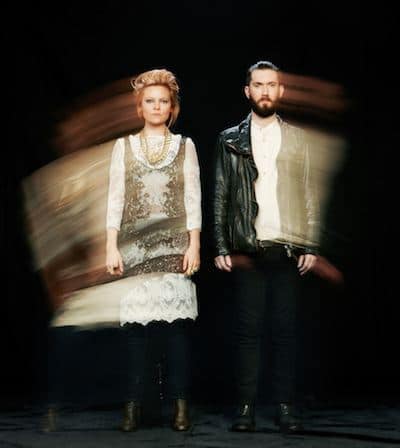 S] Hi Toby, what are you doing today – can you set the scene?

T] “Right now, we are in our house in Venice, West Los Angeles having a day off from rehearsals. We’re living out here at the moment whilst we release our new record and tour. It rains about two or three times a year in LA, and today is one of them. It’s hard to moan about it though as it’s still warm and tropical.”

S] Can you talk us through the inspirations, themes and ideas behind a couple of tracks on the record, the first being ‘Nest In Your Room’?

T] “It was inspired by The Dove by Leonard Cohen. There’s a lyric that says “I have come to make a nest in your shoe” which sparked a train of thought that includes the bee crisis the world is experiencing.”

S] The second is ‘Animals’?

T] “This song is a musical frankenstein. We stitched it together. Lyrically it’s about what it is to create and not know what to expect. It’s a good zero-ing process to scare yourself. To trust that doing something that you don’t know the outcome of, will be ok. Fu**ing with our own nerves! The vibe of not negotiating with the rules of nature, but tumbling with what the universe throws at you. Backing off from the storm of attachment and bouncing into new territory.”

S] How does this project challenge you in different ways to The Duke Spirit?

T] “It was made in a completely different way, which was refreshing and exciting. I started doing it for the very reason of challenging myself to do something different. I didn’t start recording these songs with the idea that it was going to be a new project. It has just ended up becoming that, after some friends heard it and got involved.”

The challenging part part has been working out how to do it live. We wanted to combine as much live performance as possible, to enhance the organic aspect that is in there. That’s been a lot of work, but worth it, as we think we’ve got a good live sound together.”

S] Do you think this project will allow you to approach returning to The Duke Spirit with renewed vigour when the time is right?

T] “Yes. Anything you can do to further your experiences and skills is ultimately beneficial, I think.”

T] “The initial aim was to have a bit of fun mucking around with gear I didn’t know how to use with my mate Simon [Byrt, co-producer]. It quickly became clear that firstly we were enjoying what we were coming up with, but also that there was a thread to it all. I wasn’t really thinking about anyone else other than pleasing myself, and then Liela [Moss, vocals] once she got involved.”

S] The live show looks good, when are you planning to bring it over here to the UK for a full tour?

T] “That’s in the pipes right now. We are hoping to do something in May, perhaps.”

S] Outside of music – what types of things inspire the band – art, television or film for example?

S] Since you guys have worked together for a while, do you still have fun recording in the studio – what were some highlights when recording ‘Zeal’?

T] “I love being in the studio. I like to work quickly and throw things at the wall then walk away and come back to it later. Sometimes having to work on one thing for ages is necessary, but not to be done too often! For the most part Simon and I would play things to each other that would make us laugh thinking the other person would never go for it…and they’d always be the bits we used.”

S] As a band who have worked in the UK and are now in the US – are there any great bands that you’d like to shine the spotlight on, aside from your buds in the mighty Bad For Lazarus?

T] “I really love God Damn form the UK. I’ve seen them a bunch of times and have everything they’ve released. London band The Diamond Lights are great. Nightmare Air from LA are a great band I’ve seen a few times recently. Jet-powered shoegaze!”

S] If you could rip away any existing film soundtrack and replace it with the music of Roman Remains, what film would it be and why?

T] “Le Samourai, Mad Max, or maybe Blade Runner. We’d need to strip back the songs to their droney underbellies and let them wriggle.”