Pillage a good strong ale from the buxom bar-wench and raise your swords! This great isle has a new metal band flying the flag for the old-school twin guitar, galloping rhythms and soaring vocals style. 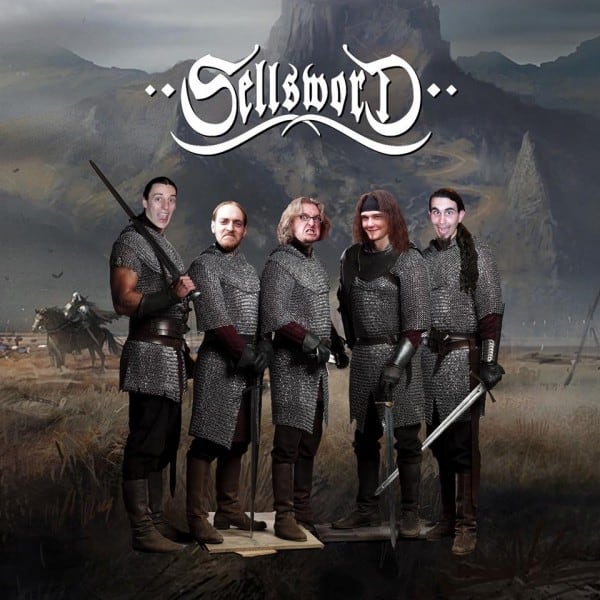 They are Sellsword and they play mercenary metal! Iron tales of battle and vengeance forged in furnaces of blazing flame and molten gold. Their début demo showcases this genuinely epic and timeless approach to great effect whilst also sounding great in the production department and is well worth getting hold of, preferably at one of their live ‘sieges.’ The band also has a refreshing ‘seriously un-serious’ approach to the often po-face posturing of this genre. As epitomised by this picture. We caught up with them to find out more.

S] Can you tell us a bit about the formation of Sellsword?

Tom [bass]: “I was out one night with the misses for a few drinks, she suggested we go see her mate Stu singing at this acoustic night. So we head over and this guy sings a couple of Dio songs. There and then I said to myself “I gotta make a band with this dude!” So I spoke to Stu, he was up for it, I already knew Alex (drums) from being the Rhythm Section with him in many other bands and the guitarists we found from an online ad I put up. The rest is golden history…”

S] Your music is really well constructed. Songs like Against the Wind build to a chorus that makes your fist want to punch the air fist and your head want to bang. Could you tell us a bit about the writing process?

T] “It sounds like a cliché but it’s a team effort – lots of bits that we fit together to make the songs. Jack wrote the initial melody for ‘Against The Wind’ and after he played it to us we messed about and it kind of wrote itself. Usually we’ll start with a riff or melody then add galloping and twinned guitars until we have a song!”

S] Lyrically you have tales of warriors and battle, often, such as with Hardrada (telling of the Norwegian King Harold Hardrada’s ill-fated 11th century campaign for the English throne), based on real events. Is there a history buff amongst you?

T] “Stu works in a museum and is obsessed with getting some sort of narrative into the song lyrics.”

They also seem pretty grounded, not straying into fantasy as some power/heavy metal is prone to do. Has being from York influenced this approach do you think?

Stu [vocals]: “York certainly does leak history from every orifice, but I don’t think it’s been a conscious choice. It’s strange – we have actually had conversations about our distinct lack of dragons/wizards thus far. We’re currently writing a song with pirates in it so perhaps those pirates could end up being attacked by a wizard riding a sea dragon, and we do have a song about an army of zombies called ‘Ashen Hand’ so keep your ears out for that one!

Metal in the modern era is becoming more synonymous with growled/screamed vocals and chugging riffs, you lot are distinctly and delightfully more classical and melodic in your approach hoisting your banner firmly across the heavy/power metal category…

Stu] “For me it’s all about a tune you can whistle but we have a huge range of influences. Some of us like the growly stuff but I can’t sing like that – gives me a sore throat just thinking about it! Also, Iron Maiden.”

The demo sounds really well produced, where/how/with whom did you record it?

Stu] “Henry (guitarist) is a mixing wizard and should probably be tried for audio-witchcraft.”

What is on your mercenery agenda Sellsword? Upcoming release/shows you’d like us to know about?

Stu] “We’re hoping to have our first album done by the end of the year, with much gigging, whilst that’s happening. Check our facebook to keep up to date with where we’re laying siege to next!”

Find out more at: facebook.com/mercenarymetal