We chat to York-based noise-rockers Sherbet Flies for our next Band Spotlight, the group is made up of Elliot Barker – Guitar/Vocals, Mike Sumner – Bass and Nick Upton – Drums. 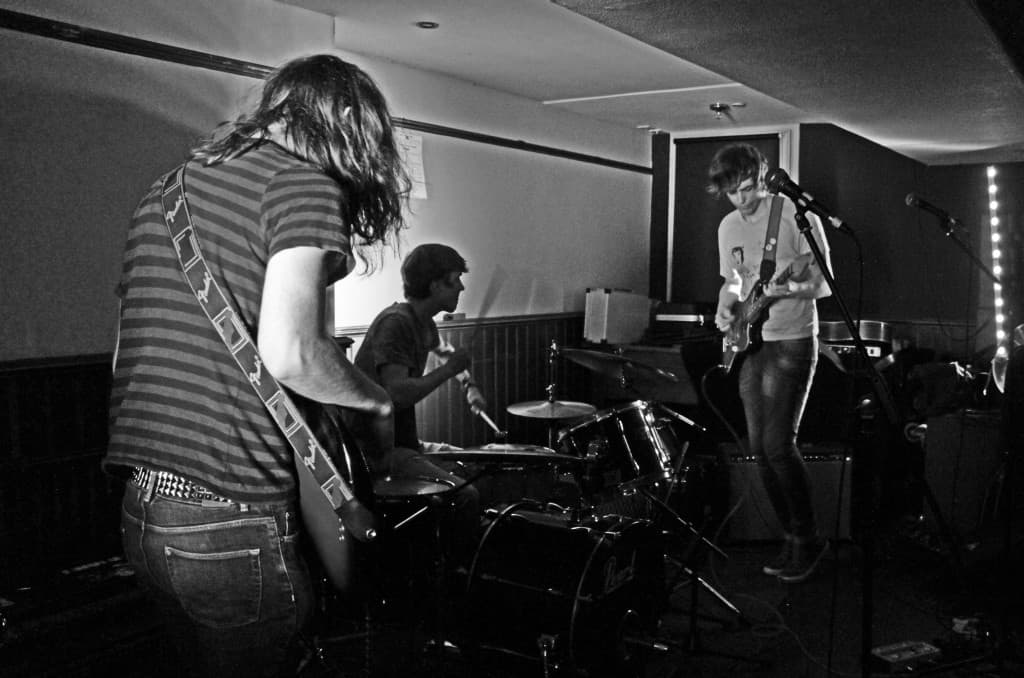 S] Talk us through the name of the band, and how that happened?

E] “We’re named after an Alex Chilton album called ‘Like Flies On Sherbert’, which is a weird lo-fi rockabilly power pop classic from the late 70’s. I came up with the name back when the band was just some weird thing I did in my bedroom in school to annoy my friends who’d go to the effort of listening to it.

I can’t remember why I decided to drop the second ‘r’ from ‘Sherbert’, I think it was because autocorrect usually corrects it to ‘Sherbet’ and I thought that that would help people not misspell our name. It hasn’t really helped much at all, people get it wrong just as often as they get it right.”

S] What types of things inspire you outside of music – think movies for example?

E] “Photography and art are both things I draw from quite heavily. I tend to think of music in quite a visual way and I think of our music as just some weird, abstract, soft focus black and white photograph or a wiry black ink drawing on degraded white paper.”

S] How does ‘No New Yorkshire’ reflect the band’s mission statement?

E] “‘No New Yorkshire’ is a reference to two things, the no wave compilation ‘No New York’ and the NME coined term ’New Yorkshire’, used to refer to the generation of bands that came out of the county in the mid-naughties. When we became an actual band in June 2014 I really wanted to do something that felt really unfashionable sonically, something that would probably make us struggle to get gigs and would put off friends who would come to our shows. Nick and I had been in a pop-punk band prior called Sunshine State in which we placed a lot of pressure on ourselves to try and win audiences over and we’d always beg our flatmates and friends to come to our shows and I just wanted to get away from that as I found it exhausting.”

N] “It was very exhausting, and I think that reflects a lot of our ethos about wanting to reject the normal way of doing things, we are a band made up of students but we do everything we can to not be a ‘uni band’.”

S] How do you feel about York’s music scene?

M] “It’s a community of people who really care about what they’re doing. What sets York apart from other scenes in my mind is people don’t just care about everything being pristine and accessible, and they have an emotional investment in what they’re doing. When someone plays something and puts their heart and soul into it the technical skill becomes irrelevant. I’ve learned to value sincerity in musicians above all other things.”

E] “We seem to be in this semi-transitional phase I think, it seems like a lot of bands are either migrating away from the city, or touring more often; so they’re playing less shows in York. There seems to be some new blood coming through which I’m looking forward to seeing more of. I guess it’s also worth mentioning that I have a cassette label called ‘Snowfall Records’ that released Fat Spatula’s debut EP last year as well as our last album. I plan on doing more releases in 2016 to compensate for the radio silence in the second half of 2015.”

N] “We’ve all come from places where the music doesn’t feel as honest too. Me and Mike are both from small towns where there’s lots of classic/blues rock cover bands who’re there for the money and Elliot comes from Dubai where the best venue was an open mic night at a pizza express. So you can imagine being a part of such a talented and honest scene has been really rewarding for all of us.”

S] What ideas help form tracks like ‘Coarse’ and ‘Not Uncertain’?

M] “It all comes from a dissatisfaction, both with our own personal lives and the people and attitudes around us. It’s about growing up, getting hurt, feeling alienated, but ultimately fighting against all that and finding your place in the world and being happy. I guess you could see our music as angry or gloomy or whatever, but it’s all about the pursuit of happiness, its outcome is positive.”

E] “‘Coarse’ in particular is about my experiences growing up in Dubai. The couplet “Sand runs coarse through my veins/The desert’s not for me” sums up how I feel about that quite well I think, it’s probably my favourite lyric that I’ve written so far. ’Not Uncertain’ is basically just a “fuck you, I’m transgender” thing I just needed to get out my system, it’s probably the most direct song, lyrically speaking, that we have.”

E] “Write and record a new album as well as final start doing tours/more shows outside of York. I guess it’s also worth noting that we all have our own musical projects outside of the band that’ll hopefully be doing stuff this year.”