In our latest band spotlight we talk to Ren Aldridge, of Petrol Girls about touring, and current motivations. 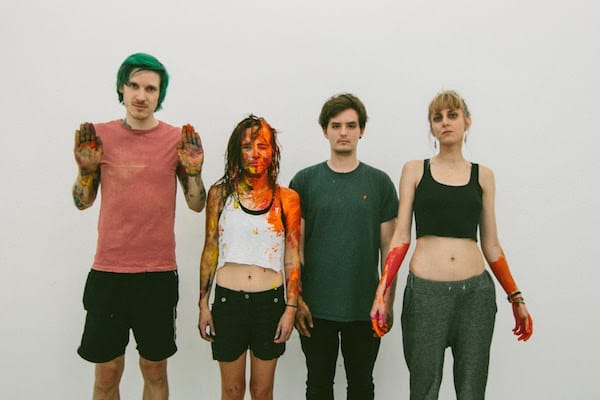 S] How are you looking forward to coming over and playing some cool intimate venues in the UK?

We’re just half way through this little run of dates now and its been fucking great. So good to see friends in different cities. It was three months since our last tour so I was well in need of a good shout. We just came from Glasgow, and we got to see our mate Chrissy Barnacle play a blinding acoustic set in the venue over the road, then went down to Bloc where the lovely Phil sorted us out with pizza – living the fucking dream!!

S] That Strike Anywhere tour is gonna be ace too – how do you enjoy the…art of touring?

The art of touring! Well now.. Of course it’s incredible, and we’re so lucky to be able to do the amount of it that we do. For sure it can be tough and disorientating at times – I don’t really live anywhere properly because of the amount we tour – but it’s so worth it. We’re getting pretty nifty at touring as well – we’re bordering on punctual these days. I’m pretty passionate about taking my tea flask everywhere so I don’t buy mad expensive service station hot drinks. We also discovered the second pillow case, so your pillow doesn’t get all gross.. Joe only recently picked up on bringing a separate bag for dirty clothes. Someone should do an Art of Touring feature and collect everyone’s tour tips!

S] What motivates you guys outside of music, think people, places and things for example?

Everyone resisting the political attacks on marginalised groups right now. The people putting the leg work in – organising the meetings and demos, flyering, writing, taking direct action.. So much activist work goes unrecognised but those people are seriously inspirational. Protest groups like Sisters Uncut and Movement for Justice. Writers like Rebecca Solnit and Laurie Penny.

S] How has the band’s mission statement changed and developed since you started out?

I think it’s just developed along with our own politics. Feminism remains at the core of our politics, but I hope that it’s become more intersectional over the years. Writing music, especially lyrics, for me is about reacting to your experiences and what’s going on around you.

When we started out, I needed the band to carve a space for myself as a young woman in a super male dominated scene, and so some songs, like Big Man, were about that, and most of our first EP was about the student/ anti-austerity movement that we were heavily involved in at the time. The songs on Some Thing are probably a bit more abstract and cover wider topics including mental health and borders. Then with Talk of Violence, about half of it ended up being a reaction to the time I spent out in Calais, and the Refugee and Migrant Solidarity conference which happened in Hamburg just before we went in to record the record. Then other songs are more to do with feminist stuff. Touch Me Again grew directly out of us making a point to speak about consent every time we play, and from the endless conversations I have with survivors of gendered violence at shows. We’re developing all the time, reacting to everything that’s going on around us.

S] How do you feel about the reception to ‘Talk Of Violence’ so far?

Yeah it’s cool! We haven’t played many shows since its release but its already getting repressed so that’s pretty cool. Mostly I just really enjoy chatting to people at shows about things like perceptions of violence and other stuff that the record’s about. There was a girl stood right at the front singing along to all the words in Glasgow and that was awesome to see!

S] What do you care about the most?

Aside from my dog (Skye, the most important old lady) I guess political change.