York has a special place in our hearts. York gave Soundsphere its soul, so to speak. We were based there for seven years, and it will always be integral to why (and how) we exist. Its bands, creatives and musicians from the area are a constant source of inspiration. Two such examples of incredibly driven talent from the area come in the form of Naomi Westerman (drums) and Dan Oliver Gott (vocals, guitar) who make up Snakerattlers (and are also two thirds of renowned York punk outfit, The Franceens). Here, in this exclusive chat, Dan sheds some light on how the project was born, the band’s inspirations and more. 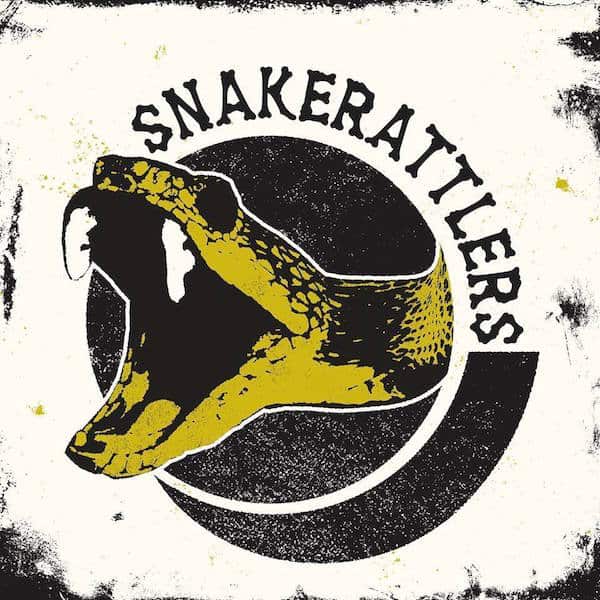 We made Snakerattlers as a backup for The Franceens, incase something went wrong at the last minute and The Franceens were unable to play a booking. Naomi wanted to learn drums, and I basically just went along to her drum practices with my guitar. This backup band was born from that, but in the end, it turned out to be a lot more serious than just a backup band. It has become our “band for life”, as it only needs the two of us to function. So I guess you could say our inspiration for this band comes from our insatiable desires to make different sounds. A band generally creates it’s own themes and ideas when you start jamming with it. In many ways, the songs write themselves.

S] Does York inspire your material at all?

Only perhaps in one way. There isn’t another band that is anything like us in York, in terms of both setup and sound, so in a way that inspires us to continue doing it. We also passed “the Nelly test” recently when our beloved Nels Almond came to a rehearsal for a sneak preview of the set. His supportive words and appreciation of the sound inspired us to continue. Nelly is from York and is an integral part of the York music scene. If Nelly is at your gig, it means you’re doing something right. He sort of represents what the York scene should be, so to hear his positive comments after the preview was definitely inspirational.

S] What ideas and experiences inspired ‘Let The Devil In Your Soul’?

This song is a very special one. Not everyone knows this, but I am a Satanist. I didn’t identify with a religion for a long time, until I read The Satanic Bible. I basically realised that everything I believe is what Satanists believe. So therefore I am one. ‘Let The Devil In Your Soul’ is about those beliefs. My beliefs. Satanism is usually met with negative responses in the UK. People seem to think it’s all about devil worship and generally being evil. I can assure you that is not the case. It’s more about basic human nature. If you are in any way curious, you can find out plenty of stuff online about Satanism. Wikipedia is a good place to start.

Write decent songs and carve a place for ourselves in the UK underground scene.

S] How are the methods and general vibes different to your work/creative process with The Franceens?

Methods differ slightly. I am actually concentrating on playing guitar to a better standard. Franceens is more a case of hit it and hope. I have also spent a lot of time perfecting the sound and tone of my guitar. In a two-piece, it’s important that it sounds full, so effects and levels need to be considered carefully. I am also writing actual lyrics for this band, which is something I never do with The Franceens.

The vibes are a lot more relaxed. Me and Naomi are practically the same person and it’s nice not having to rely on anyone else. We are also both very driven, so you can expect to see Snakerattlers really take off next year. Nothing is holding us back.

S] What about outside of music – what movies, games, or specific people and places inspire you?

Nelly is by far my biggest human inspiration. I was worried that he wouldn’t like our new band (as Franceens is his favourite band of all time). But he did. It was a huge relief! I am also very inspired by the video game series; Fallout. Especially Fallout 4. I love 1950’s American culture. Mix that with futurism and visions of a future apocalypse and you’ve got me hooked. Well done Bethesda! I do enjoy going to the cinema, but I wouldn’t say that films inspire my music as such.

S] How do you look back at the success you had with Franceens as you embark on this project?

I look back on it fondly, but with frustration.

Absolutely not. It also depends what success means to the individual. With things like Facebook being a regular way for bands to advertise/talk/book gigs, there aren’t really divides anywhere anymore. Just before I wrote these answers, I was speaking to a guy from an American band I have discovered, about the possibility of his band coming over here for a tour. The only thing that divides people is the same thing that’s been dividing them for centuries…money.

Now that would be telling. There’s no real secret to it really. You just have to make decent music, have a good image and be persistent. Again, it depends what success means to the individual. Some people want mega fame, some people just want to play their hometown every month. There’s so many variables. The main thing is, if you want to “get out there” you have to be prepared to put the effort in. Nobody will do it for you, unless you pay them. Contact relevant people, keep messaging them when they forget to message you back…persistence is key.

S] What has been a career highlight for you, thus far?

I don’t have a career. I choose not to. Music is a cathartic bit of escapism for me. Even my dayjob is not my ‘career’. I never wanted a career at school. Didn’t go to uni. I just decided one day that there is absolutely nothing wrong with just having a steady dayjob and being in a band. That’s all i’ve ever aspired to do, and that’s what I’m doing.