The sound is heavy and seems to land in waves. Like a grooving ocean carressing the Cliffs of Dover. Surf. Wipe out. Beneath the surface, lower notes wrap themselves around the motor-function of your feet. The king of the ocean calls from his submerged oasis… 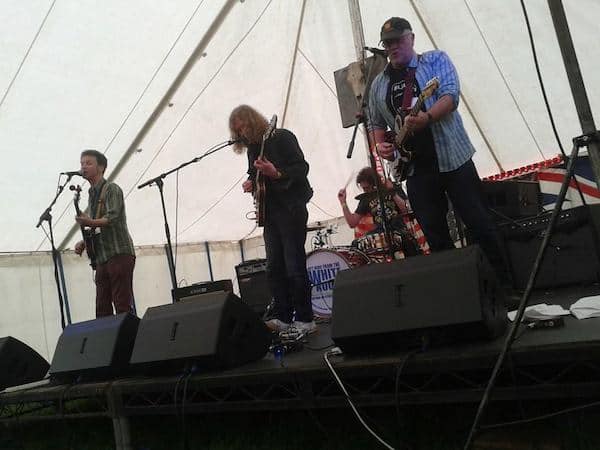 York’s Soma Crew (formerly Muttley) are a hypnotic band to experience. Their entrancing alternative rock, lightly laced with the psychedelic, is in parts reminiscent of all the greatest British rock bands and yet entirely their own. The proverbial something old, dancing in the kaleidoscopic floodlights of something new. The compositions start off warm and welcoming, inviting you in before building and rising until you are fully engulfed. Many of their songs are possessed of a great forward momentum that suggests that this would be great driving music. We caught up with guitarist / vocalist Simon Micklethwaite to do a bit of digging into this fascinating project.

S] So, how did Soma Crew form?

Simon] “I have a solo project called Muttley. My first album; ‘Contrarians’ was mastered by Dave Keegan, a York acoustic musician who had, towards the end of 2012, begun to play around with electric bass guitar. I was working at The Fulford Arms where Dave ran the Monday night open mic session. I started playing new songs for my next Muttley solo album, and Dave began to play bass along with me at the open mic. Steve Kendra joined us on electric guitar, then Nick Barker on drums and so my solo project naturally evolved into a band. We called ourselves Muttley Crew as a bit of an in-joke; we were anything but spandex-wearing metal-riffers!”

Indeed. Having witnessed Soma Crew live, this writer can confirm that there was no spandex to be seen, but there were certainly riffs. Earlier this year, whilst still under the Muttley Crew moniker, they released the album ‘Another Dead Insect’ . . .

Simon] “All of the songs from the album were gigged by the band during our first year and a half. We attempted a couple of recordings in the early part of 2014, trying to capture the raw, live feel of the songs, but, for one reason or another, it didn’t work out. Nick and I eventually recorded the drums, vocals and my guitar in a four hour live session engineered by Sam Forrest at The Woolpack, just before that venue ceased to be a thriving, underground outlet for a myriad local and touring bands seeking a small, yet exciting space to put on shows – but that’s another story…! Then, when it became clear that Dave Keegan could not commit to a future with the band, we set about recording Steve’s lead guitar, and new bass parts with Al Hamilton who joined in December 2014. As a sonic representation of what was Muttley Crew, slowly becoming what is now Soma Crew, I reckon the album captures a transitional period. I’m proud of the results and looking forward to applying what we have learnt from those sessions into future recordings.”

Who has inspired you and Soma Crew musically?

Simon] “There are too many to list here, however the most directly influential would be Velvet Underground and Spiritualized. The first time I heard Velvet Underground’s song ‘Heroin’ was revelatory. I was caught up in the hypnotic simplicity of the music; the way it slowly built up in waves, collapsing and swelling, embodying the narcotic thrust and implosive tread of the lyrics, enticing and thrilling, yet shadowed with foreboding. Spiritualized are fairly similar in many respects, though my favourite album of theirs; Laser Guided Melodies has a more ambient, clinical sonic palette. Other albums that have had a telling effect on my musical leanings are ‘Vanishing Point’ by Primal Scream – I love the sparce, atonal moog dynamics, anything by Mazzy Star, Jesus And Mary Chain, and ‘Loveless’ by My Bloody Valentine. I have, more recently, been listening to Sonic Youth’s ‘Bad Moon Rising’ and ‘Daydream Nation’. Both of these starkly beautiful, chaotic and de-structured experimental albums have encouraged me to explore an untethered range of possibility in terms of how a song need not be limited by tradition.

Lyrically, my works are a mix of stream-of-conscious and cut-up word association exploring the disparity between hope, expectations and reality. Some songs explore the effects of psychosis and paranoia, the desire for trust and empathy and the struggle to shape dreams of personal and social improvement in the ruthless politically-disparate sphere of contemporary life. Pretty light-hearted stuff!! Many songs are drawn from personal experience, yet I try to lend them a more universal tone. Lyrically, my influences range from Bob Dylan, John Lennon, Lou Reed, the writing of Carson McCullers and the poetry of Charles Bukowski, to the science fiction of Philip K. Dick and Iain M. Banks, the poetic/prose reality fiction of David Peace and the songs of Jason Pearce.”

S] You’re pretty active when it comes to gigging locally and put on a great, immersive show. What are your thoughts on the York scene and the opportunities it affords up and coming bands?

Simon] “It is difficult to describe a ‘scene’ without personalising its context. For me, York’s scene revolved around a handful of bands, promoters and fans that played, arranged and attended shows at The Basement, Stereo, Wrong Side Of The River and The Woolpack over the last seven or eight years. Only The Basement exists now as a venue, though Fulford Arms has taken up the mantle with consistently fascinating and exciting shows from Please Please You and Behind The White Door. And The Fleeting Arms, formerly Stereo, provides an opportunity for bands and artists to put on their own nights, unrestrained by the strictures of traditional venues. Forever changes……”

And there you have it. I can’t recommend catching this band live enough, whether in York or coming soon to a town near you! Soma Crew are planning on following up ‘Another Dead Insect’ with an EP in late summer and after that intend to simply “have fun playing new songs and old for as long as we can!”