As Sow, Anna Wildsmith has long displayed a one trotter-ed salute to the world at large. Both terrifyingly honest and honestly terrifying, her albums ‘Je M’aime’ (1994) and ‘Sick’ (1998) were radical in the sense they presented a credible sense of female empowerment over some truly glorious noise, all the while remaining viscerally challenging.  For those yet to experience her porcine delights, perhaps you’d be swayed by the musical company Wildsmith has assembled to assist on her musical odyssey; along with long-time collaborator (and former partner) Raymond (Pig/KMFDM ) Watts, there’s Jim (Foetus) Thirlwell, Sasha (KMFDM) Konietzko, Rob (Euphonic) Henry and Martin (Test Dept.) King – a veritable who’s who of the alt. scene glitterati. After ten years in, quite literally, the wilderness, Sow are soon to return with a triumphant new album, ‘Dog’ (I, Absentee Records), and Soundsphere were on hand to get the low down… 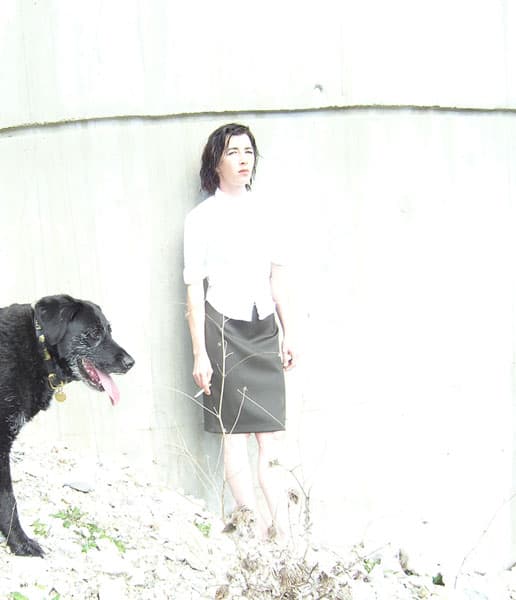 S] Your new album ‘Dog’ has been inspired by your dog, Buster? Can we expect tracks featuring white noise whilst you repeatedly yell “Sit! Beg! Roll over!”? It could actually work really well with the S&M crowd…

Anna] Well, you’ve planted a seed there; I wish I’d thought of that before, but yes, ‘Dog’ was inspired by Buster in that it is furrier, friendlier and far more fun than any of my previous work. With ‘Dog’, I felt the need to be more light-hearted, perhaps because since “Sick”, the world has got sicker and I became sick to death of feeling sick each time I read the news.

S] How do you select your musical collaborators?

Anna] I select my collaborators according to their potential and my vision of how I want the tracks to sound.

S] How does the process work? Do you begin with the words or the music? Do lyrics evolve to fit the music or vice versa?

Anna] It varies, but on the whole I write the lyrics first and the music follows the vibe. However, at times the lyrics are written as the music evolves. There are no rules.

S] What are your hopes and fears for ‘Dog’?

Anna] My hopes are that the few fans I have won’t be disappointed to hear something fresher, less dark and more dance-y. My fears are that they will.

S] With such a gap between musical endeavours do you find the sabbaticals fuel your urge to create, or do you find the whole musical gestation process actually hinders your output?

Anna] I like to work with efficiency, so sabbaticals make no difference. I write when I have something to say. As I live in France and my collaborators live elsewhere there is no time for beating around the bush.

S] Is it like an epiphany of sorts then? Do you find inspiration comes easily or is it a more laboured, drawn out affair? Have you ever experienced writer’s block?

Anna] No, I’m afraid there’s nothing God-like in my writing technique. I get an idea and I work on it until I feel it’s right. Inspiration comes very occasionally, and when it does, it only generates enough fuel to get the process going. After that it is just a matter of labouring on through. I have been dealing with writer’s block for years; that’s why the novel I have been writing, re-writing, throwing away and starting again is far from finished. I’ve found the best thing to do is to walk away, go plaster a wall or two, shoot some wild boar and then come back. If nothing happens, then I go to the bar, get pissed, take some drugs, forget all about it and wait for a rainy day.

S] How are you enjoying living in “hardcore fucking poverty” as Raymond once described it?

Anna] It’s a love and hate thing. I love living in the middle of nowhere, surrounded by vines and old peasants, wandering about in my dressing gown and not washing for days, but I hate having to drive for miles just to buy a pint of milk.

S] Any plans to return to the mainland then?

Anna] I have absolutely no intention of returning to London, Berlin or any other big city for that matter as I have developed an aversion to modern life in general. I do not own a mobile phone or a television, and I have only recently acquired a computer with access to the net.

S] Are there any artists you’d like to work with?

Anna] Are we talking fantasy here? If so, musician number one would be Brian Eno. He has always been ahead of his time and I have never heard anything he has put his golden fingers to that sounded crap. Another artist would be Brigitte Fontaine because she has a wicked sense of humour, a wild imagination and is far more nuts than me. The list could go on and on, but the point is that none of the people I could quote have ever heard of Sow.

S] Are there any artists you feel have had an influence on your work?

Anna] When I was young and starting out with “Je M’aime”, I must admit that I was extremely envious of Diamanda Galas’ extraordinary vocal chords and could spend hours listening to ‘Wild Women With Steak-Knives’, fantasizing about killing men, but on the whole, I’d say there are so many excellent musicians out there, that I have been influenced by every single type of music ranging from Mozart to The Butthole Surfers.

S] What do you think of ‘Je M’aime’ and ‘Sick’ now with the benefit of hindsight?

S] Do you still recognise the person in the mirror as that same person who produced ‘Je M’aime’ then?

Anna] Not really, I think that the music and lyrics speak for themselves. Unfortunately, I still recognize that person even though I’m a bit more wrinkly nowadays.

S] How are you coping with bringing Sow into the digital age? Obviously the www was in its infancy when ‘Je M’aime’ was released…

Anna] I am lucky enough, thank Dog, to have a young and enthusiastic person, who has just started up his own record company, dealing with all that.

S] Do you spend any time online with your Myspace and Facebook pages or do you prefer to leave that to other folk? Raymond went off on a hilarious anti-Facebook rant when we last spoke to him, we don’t think he’s a fan…

Anna] I’ve tried, but it does my head in and instead of counting my new-found friends, I’d much rather have a good old-fashioned wank. I’m sure that if Raymond, like myself, had time to waste, he’d prefer to spend it having a facelift, as opposed to browsing through Facebook.

S] Whilst we’re on the subject, have you ever Googled yourself, and if so, what did you discover?

Anna] I admit to Googling myself, but I discovered nothing new except for free downloads of my music which I was never consulted about.

S] How do you view the media’s role in the music industry?

Anna] To be honest, I haven’t been solicited that much by the media, so I have nothing interesting to share with you on that matter. I suppose, ideally, I’d rather let the music do the talking, but in this day and age, the media has the power to make or break an artist, politician or rich, living Barbie doll, so I guess it’s something one cannot ignore.

S] How do you see the future of the record industry in relation to the seismic changes that the digital age has brought about?

Anna] Well, I believe it’s time to get in a quote from the Sex Pistols: “No future!”

S] What advice would you give the ‘Je M’aime’ Anna?

Anna] Put some clothes on!

S] Any other words of wisdom or warnings you’d like to pass on?

Anna] Never put your daughter on the stage, and, most importantly, do as many drugs, smoke as many cigarettes, drink as much booze and eat as much as you can ‘cos life kills…