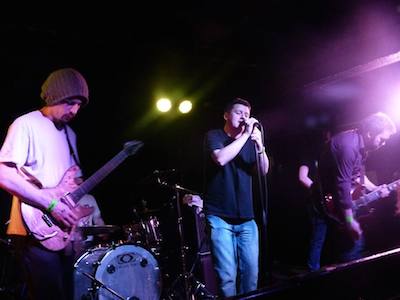 S] How did the band form originally?

Stonewater] “We started to set a rock band project up and we had some ideas for that but band members have come and gone. Our present and best line-up is Jack on drums and Bex on bass. Stonewater has been running for five years, and with this set-up, it’s been about two.”

S] How do you feel about the York music scene and your place within it?

Stonewater] “We’re doing our own thing, which is what we set out to do, we’re writing our own type of music, it started off as an excuse to have a beer once a week and turned into this. We never worry about whether we fit in, hopefully people will get into what we’re doing. We’ve always said we’re always going to write our own stuff, that’s what we’re here to do, get down here every Tuesday and just do what we like to do, write our own music.”

S] Do you write in the studio, or do you find places inspirational?

Stonewater] “There are some songs that we can just click within five minutes and just say, ‘right, that’s a song.’ Then there are other songs where we have to sit it out; there’s definitely no process about it. Sometime’s Phil will turn up with a whole song he’s written acoustically, vocals and everything and other times it comes from starting with a guitar riff and just jamming it until it becomes something we dare play in front of other people.”

S] Do you feel like there’s a perfect track, one that defines where the band is at?

Stonewater] “’Enemy’ really sums up the band, but we haven’t been able to record it. Try to Live is a good representation of where we’re at, at the moment.”

S] Are you releasing tracks one by one, or will you be having a record in the next year?

Stonewater] “We do hard copies of the EPs, when we started off we’d do three tracks and we did that for the first two sets of recordings we did. It’s track-by-track now but we’re at a point where it’s going to change a lot again.”

S] What would you say are the biggest challenges for Stonewater?

Stonewater] “All we do is go out there and have fun, it is a night out for us. Go out, play some music, have some fun. There really isn’t a plan; if something happened with it then we’ll jump on that bandwagon. Because we don’t have a plan, it’s an endless opportunity. We’re five years in and people are still just happy to play.”

Stonewater] “Soundgarden would be the body and Pearl Jam would be the head, because we’re all influenced by Pearl Jam, that sort of heavy rock vibe. The veins of Springsteen that angry, boil in the veins feel. Stone Temple Pilots, Radiohead and The Smashing Pumpkins; also Spock’s Beard would be in there because of how some of our guitar parts are quite different and counteract each other, which is good.”