By Editor
By Editor April 26, 2017 Band, Spotlight
No Comments

In our latest band spotlight, we chat to Sumo Cyco’s Skye Sweetnam about music, touring and inspirations. 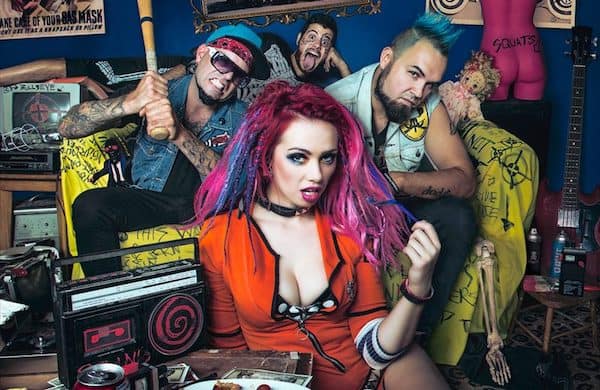 S] How do you feel about the success you guys have achieved over the last year?

We’re very happy to be able to be able to make music and tour like we do. It’s our sixth trip to UK and as a Canadian band that hasn’t even toured across our whole country that’s pretty wild! We also have been super honoured to have such support with the pre-order of our new album, OPUS MAR.

S] What’ve been a couple of highlights for you?

One of the best moments has been collaborating with Benji Webbe of Skindred. We’ve been massive fans for a long time. Skindred has helped inspire the creation of Sumo Cyco, so finally being able to release ‘Move Mountains’ has been a check on the bucket list. Not to mention he’s the coolest dude you’ll ever meet.

S] How’ve you enjoyed playing shows in the past in places like Hull, and Chester – where you’ll be going back to on this last tour?

We’ve loved it! In Chester it was our fourth time playing Live Rooms. We have had some fun experiences there, our buddy Matt took us to the Falconry last year. It was an awesome day trip with Butcher Babies. Hull surprised us last time because we’d never been there before, but those kids love to party!

S] What’s the biggest challenge for the band right now?

Well right now we’re still at an investing stage with our band, more money goes into the band than we make. But that’s what it takes to keep growing. We’re an independent band so we don’t have any label budget, everything is pretty much a hustle. But it’s like building any business, it takes a lot of overtime, sleepless nights and hard work to get to where we want to go. Not complaining. It really means a lot when our fans buy a T-shirt or CD.

S] What keeps you motivated outside of music – think people, places and movies for example?

Yes, movies are a big source of inspiration. We love making our own music videos and incorporating the classic horror movie themes. We’ve done Zombie, Haunted House, Clown Slasher, Aliens… etc. Our new album OPUS MAR is set on a steam train, each music video relates to a different car on the train.

S] What ideas led to the creation of ‘Move Mountains’?

First of all, as I mentioned it was a dream come true working with Benji Webbe. We had a few connections to him and so one thing lead to another and we asked if he’d want to be a part of the track. We worked on Opus Mar with James “LEROCK” Loughrey who has produced the last three Skindred albums.

Benji sent us his rough vocal tracks while on tour and I specifically remember listening to it on headphones in a coffee shop in Manchester trying not to scream. He’s become a great friend since then, he’s had our lead singer up on stage with him a few times to sing Warning, and do the Newport Helicopter!

S] How has the mission statement for SC changed or developed since you started out?

One of the main things is we’ve now produced two albums. We originally just wanted to release singles with music videos. We never had real plans to make an album until the fans asked us enough times that we caved and changed up the strategy.

I think releasing singles is a more enjoyable process, because each song has its own time, its own visuals. Albums take so much longer to make so it takes so much time between new releases. We don’t know where things will go moving forward, but we’d love to try maybe releasing shorter EPs next.