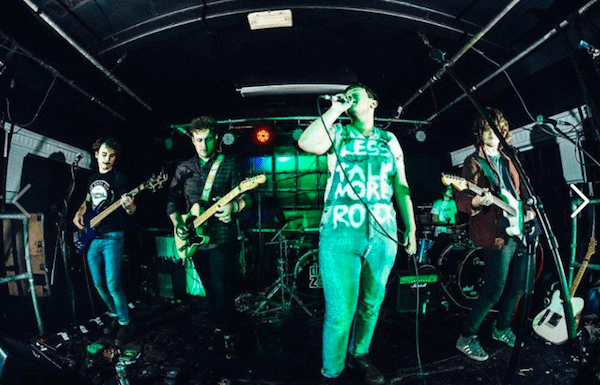 S] How are you lads doing today?

Joss] Terrible! Uni is a nightmare!

Sam] Been at work, I’ve graduated and I’m ashamed to say I’m a corporate stooge!

Eric] Slept through an exam…whoops.

S] How did the band form?

Oli] Joe and Sam had been jamming for a while when Joe approached me out of nowhere on a night out and asked me if I played bass. We jammed a bit together and things sort of just took off.

Sam] Yeah, me and Joe met and we jammed couple of times and talked a lot about The Strokes. Things went a little quiet and then we ran into each other outside a takeaway after a night out and got chatting and said yeah we need to get this band going. So we’ve been there from the start and the rest of the band has, over time, fallen perfectly into place.

S] What keeps you guys passionate outside of music – think movies, people and places for example?

Joss] Well, I’m just finishing my dissertation, which has been a labour of love. But I am also totally obsessed with silent films, making bread, and Rupaul’s Drag Race. Honest.

Joe] If anything, it’s that Trump became President of the United fucking States. If he can do that, we can and will bring back rock and roll and there’ll scrolls about mine and Sam’s guitar playing. But I’ll say It’s Always Sunny too; for breaking the rules.

Sam] Have always listened to a lot music, I love biographies, but currently rereading 1984 and questioning the entire world. And who doesn’t love dodgy TV and a bit of Fifa?

S] Who or what are some of your greatest musical inspirations?

Joe] I taught myself to play guitar by learning Albert Hammond Jr’s parts on Is This It, the band and the album that ‘got me into’ music. However, I feel the band that developed me as a musician the most is The Rolling Stones, I’d always listened to them as i was growing up, but when i grew older I got their ‘golden era’ albums, my mind was blown. No other band has that hypnotic swing so down. Even the song Midnight Rambler is a huge inspiration to me – it’s the greatest riff ever – (I recommend the 1972 version).

Sam] I’m a huge RHCP fan and John Frusciante is probably my all time favourite guitarist, alongside David Gilmour – he only needs play a note and you know it’s him, incredible. I love Pink Floyd, their concepts and themes and ethereal sound just take you to a different place. Green Day was the first band I ever obsessed over, and then I was all about Arctic Monkeys, the Libertines and any other noughties indie band you could ever think of. My biggest influences on the sound of the band though are The Strokes, The Clash, Parquet Courts – those edgy, almost but not quite punky guitars – and all the blues I grew up listening to from my dad. We’re certainly a blues influenced band, even if it’s somewhat subconsciously.

Joss] I see the band’s music as very Stonesy, there’s definitely a strong blues influence throughout, although that may not be obvious. But my vocals are motivated by trying to sing as well as Van Morrison and Otis Redding, which is as frustratingly difficult as it sounds! But they’ve really shown me how to bring energy and power into a vocal.

Eric] Always been more John and Paul than Mick and Keef much to Joe’s dismay (fucking spanner). Oasis and the Smiths really give me the drive though, and a bit of Bowie on the side is never a bad thing.

Oli] As a band, our main plans are the release of our new EP and an EP launch gig around the end of January.

Joss] Convincing the band to cover ‘Carol’ by Chuck Berry and playing a fucking lot of gigs.

Eric] [We want to] get the EP out there as far and wide as possible, ’cause when it’s in the right hands it’s gonna explode. So hopefully [we’ll be at] Glastonbury, confirmed in 2018.

Oli] Playing at Welly supporting Dreadzone was a highlight for me. Welly is a great venue, and to support Dreadzone was pretty cool.

Sam] Chilling with Andrew Savage from Parquet Courts in Leeds was wild, nice guy and a genius lyricist, as was Welly with Dreadzone. It’s been great just growing as a band and as mates though, we would all be mates regardless of whether we were in a band together and that’s key for me. Playing the Adelphi, as you’re sharing the stage with some incredible names there

S] What do you think of Hull’s music scene, currently?

Joss] It’s an interesting mix, very eclectic. I love the wackier bands like Black Kes, and Bud Sugar are absolutely fantastic. The Scene itself is different, The Adelphi and O’Rileys are great and friendly establishments, beyond that there’s some dubious allegiances. Let’s just say that talent sometimes comes second to connections. But that’s the same everywhere, the music industry is nigh on impossible to crack now.

Joe] I don’t think we realise how lucky we are to be a part of the scene at this crucial time. The City of Culture award has sent this place full of creatives into overdrive, and it’s wild; keeps you on your toes! Some notable mentions are the late, great Street Urchin, La Bete Blooms, and The Froot ‘67. The work of people like Mark Page, Dan Mawer, Darren Bunting and Paul at the Adelphi is fantastic too.

Sam] There’s a lot of cool stuff going on, and having lived in the city for four years, I’ve grown to love the unique charm of Hull, and I think that City of Culture is going to be huge for the city and all of the art within it…you get the impression it’s being taken very seriously by the city, and therefore it’s an exciting time to be around. Having said that, we haven’t been without our fair share of difficult encounters as we’ve worked our way into the scene so far.

Eric] I genuinely don’t believe there’s a band like us in Hull at the minute. Got a reputation for being cocky but it’s because we know we are the best band in this city at the moment. Hopefully more bands will follow suit and help us put Hull on the map a bit more, because in all seriousness there is some phenomenal talent in this city.