Soundsphere magazine catches up with York garage punks Dan Oliver Gott (vocals, guitar) and Naomi Westerman (vocals, bass) of The Franceens for a quick brew and to talk about the band’s material, influences and more. 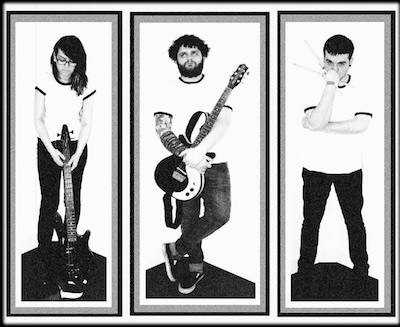 S] What inspired the formation of The Franceens?

D] “The Franceens is the music that I want to hear.”

N] “We were in a band called Sky Rocket Jack before with our drummer Miles [George Morrison]. That was more of a short-lived social experiment than a band! It naturally came to a close. You can’t really go wrong with the ‘play what you like’ attitude. There’s nothing better than writing or playing stuff that you wish you were watching.”

D] “I basically said to Naomi, ‘Would you like to play some rock ‘n’ roll?’; that’s the music that we both love, and The Franceens is the band that I’ve always wanted to, and should have always been in.”

S] What would you say the main musical influences for the band are?

D] “We all collectively love bands like The Sonics and Manic Street Preachers.”

N] “I think we’ll listen to any genre that has a ‘raw’ sound to it. We spend a lot of time in the van, so we tend to get through a lot of stuff. We’ll listen to everything from 50s rock ‘n’ roll to more recent stuff like The Hives and The Computers. We also listen to a lot of soul stuff. So yeah, anything that’s a little bit fuzzy and raw.”

D] “We have a lot of individual influences as well. I take a lot from GG Allin in terms of his performance style. He was the king of rock ‘n’ roll. But then, our drummer Miles is influenced a lot by Queens Of The Stone Age, speaking on his behalf!”

S] What do you think of the punk music scene in York?

D] I think we can fit into any line-up! We’re not really a punk or garage band. We’re sort inbetween! But then, we play on a lot of punk and garage gigs. If there was a heavier indie line-up we could probably jump on that as well. We will play any gig. Bands who don’t play all the time are just lazy in my opinion. How can you be in a band and not want to gig every weekend? That’s what they’re designed for.”

N] “We’ve met a lot of bands on the road, and now we’ve started to put on a lot of our own gigs here, and now we’re starting to see more of the music that we like come this way from other parts of Yorkshire and Manchester.”

D] “Yeah, there’s a guy we know who’s become a rather big player on the York scene, Sid McQuilliam who’s at The Woolpack and he’s got this great mission to bring bands to this city, and now we are seeing some signs of life in the scene again. Before we started putting stuff on as Behind The White Door (www.facebook.com/behindthewhitedoor) at The Fulford Arms, everything was getting very samey. To me, these places are where the future of York’s music scene lies, where you can go and see bands for a small cost, or for free.”

N] “Given that there seems to be a lot of free gigs happening in York at the moment, what’s your attitude to that?”

D] “It goes back to that point I made about being a lazy band. If you’re hard working band like we are, then we are always prepared to play free entry shows because we like to think that people will want to buy our merchandise when they’ve seen us play, so we will be making some money. We’re not in it to do that, but we’d like to think that if people enjoy what we’re doing then they want to wear our t-shirts, or have our album.”

S] Are there any great bands coming out of the UK at the moment?

D] “In York, Freaks + Geeks are up there for me, I think they’re really good. Also, Fawn Spots are like local heroes now.”

N] “There was a band called The Hipshakes that we got over from Bakewell in Derbyshire, and they are really good. There’s also this fantastic band called Sheepy from Liverpool. Liverpool has a really good scene, and they support each other a lot.”

S] Tell us about how you got signed to TNS Records in Manchester?

D] “We played a gig for them over in Manchester, and I guess they really liked us. About a month after the show they asked us if we wanted to put an album [‘Stepford Smiles’] out. It was a bit of a milestone for us. TNS are well known in the punk scene, so when we got that opportunity, I felt like we’d really achieved something.”

S] Any advice for other independent bands looking for the same opportunity?

D] “Gig and gig until you’re sick of playing the songs that you’ve got. There’s always going to be somebody out there who’s not seen you play, and you never know who’s going to be out there. We played a gig in Liverpool and met a booking agent for shows in Germany. She gave me her card, and asked us to contact her, we did, and now we’re going on a German tour.”

N] The best way to make an impression is out and about at a gig. Even though the internet plays a big part, there’s nothing that has as big an impact as seeing a band live. You have to be driven.

S] What inspires the band’s writing?

D] “We just think of a few riffs and put them together.”

N] “The majority of the riffs when we first started came from Dan, as he had all these songs, and then Miles put his own spin on the drums and I did the same on bass. Every new song since that period, we’ve all had joint input. Dan’s normally quite controlling, and when we started the band there was a warning from Dan that he could be that way!”

D] “I have to warn people, because if it doesn’t sound like it does in my head when it gets played, since I wrote the thing, then I’m going to want it to sound like it does in my head! The good thing about writing with Naomi and Miles is that they’re really good sh**-filters in that if I’ve written a bad song, they will tell me, and it won’t get used. Two of the songs in our set now are Naomi’s and it’s really good that she’s able to come forward and say ”Let’s try this out’, and Miles is the same now as well as he’s done one of the songs we play in the set. That’s really nice for me, as it takes the pressure off, and the songs sound like we all want them to sound. We write collectively now, and go ’round Miles’ house and do it quietly, and then we’ll head into the studio and do it loud. If it works in the studio loud, then we’ll keep it!”

S] What sorts of themes and ideas inspire the band?

D] “We like to keep it real. We don’t write about going out on riots because we don’t do that! We’re sat here now with you drinking tea, and we shop at Tescos like everybody else. The songs are about stuff that we believe in. ‘Stone’ is about people complaining that there’s no scene and no gigs, but then, when you give these people a flyer for a show, they don’t turn up.”

N] “We tend to write the melodies first, and then add the lyrics in.”

D] “Yeah, I usually get a feeling for what the song’s going to be about, and then I’ll just give it a title and then go from there. With ‘Attack’ which is obviously about nuclear war, in the chorus I just shout ‘Attack!’ over and over, and so I knew that was the word the song was going to be based around.”

S] Is there a song that you feel like perfectly defines where the band is at?

D] “Yeah, ‘Wish’ is all about this generation that thinks everybody’s famous with X-Factor and all that sort of thing. It’s the same with ‘Pledge’ – that’s about doing your own thing, and not caring what others think. Like, if I want to write a song and repeat the same lines over and over again, I will do it.”

N] “‘Pledge’ was written last year, and since then there seems to be loads of bands doing that PledgeMusic thing to fund their albums, and we are against that type of thing.”

S] Why do you feel so strongly about this?

N] “There are ways and means! People ask for money to record an album, but they’ll still go out on a night out and spend around £100 on that.”

S] How do you guys look back on what you did with Sky Rocket Jack?

D] “It was a social experiment! Can we make a completely ridiculous band that has absolutely no purpose whatsoever and can it get gigs, and the answer was yes.”

N] “And we met Miles through that band, and used it to teach him to drum.”

D] “We met Miles when he came to a rehearsal for Sky Rocket Jack after our original drummer left. I remembered him telling me that he’d always wanted to drum in a ska band. I thought I’d ask him to play with us. He came down for a jam to see how he’d get on, and he was walking down to Melrose Yard studios for his first practice wearing a Green Lantern hoodie, and I just said, ‘You’re in!’ He didn’t even have to try out or anything. I just taught him how to play, and now he’s better than me on the drums!”

D] “We want to release a record every year, so I think this year we’re going to release a single or something, and maybe do it on vinyl! And we’re touring Germany in May which is going to be exciting. We’ve started to get the kind of gigs we’ve always wanted, so hopefully more of those! We’re going to keep going. I’ve got about ten years of serious gigging left in me, so I want to do as much as I can in that time.”

S] If you could come up with a Frankenstein’s monster for The Franceens sound, what would it be made up of, and why?

D] “It’s got to be the bell-end of GG Allin, the head of The Hives, and maybe the feet of The Computers!”