In our next artist spotlight, we chat to Tom Adolph of Ugly Love about the band’s music and main inspirations. 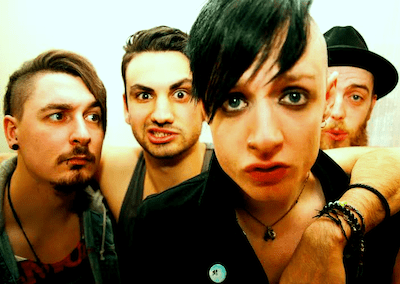 S] What is the mission statement of Ugly Love as a band?

T] “To have as much fun as possible. There’s no elaborate answer I’m afraid.”

S] If we’re not having fun and our audience isn’t having fun then it’s all totally pointless!

T] “Talk us through the inspirations and ideas of ‘No Model’ as a single?I could dress the song up by saying it’s about vanity, confidence and self perception…which it is. But to put it bluntly it’s a song about feeling like an ugly bastard! Everyone feels that way at some point, even the most beautiful people in the world so I thought it was a theme worth capturing. But the point is that I’ve taken that negativity and made fun of it. I’ll never be one to wallow in a song. If I’m not taking the piss out of other people, I’m taking it out of myself. Mostly the latter.”

T] “We want to buy a band pet. Preferably a chinchilla called Gary. Gary the Chinchilla. Apart from that we’ll just gig our arses off. Travelling in a van, causing chaos with my mates, jumping around on stage and hanging out with people that love our band? Sold! We live for it, so we’re going to do as much as we possibly can. Forget real life. This is way more fun. Oh and we’ll probably make some music videos and start thinking about writing a record too.”

S] Are you planning on playing Yorkshire at all?

T] “No solid plans in the diary at the moment but I’m sure something will come up. I want to play in Leeds. I love Leeds.”

S] What are your favourite places to play in the North of England?

T] “We’ve never played in the North! That’s why The Dead Betas tour in April is a big one for us. We get so many tweets and Facebook messages from people asking us to play in Newcastle and Manchester and now we finally can. I’m so excited. We’ve actually got a day off in Newcastle so I think we might try and find the North’s best water park. I love a good flume.”

S] How important is image to Ugly Love?

T] “Very. It’s something we’re starting to think more about too. Most of the bands we grew up listening to had strong aesthetics and it’s something we want to carry through into Ugly Love. Besides, modern rock’s image sucks. It’s tried so hard to be relatable that’s it’s just become dull. Let’s be rid of checkered shirts modelled by boys standing by trees once and for all. We’re due a new breed of rockstar now.”

S] If you could come up with a Frankenstein’s monster for the Ugly Love sound – the head of Manson, the arms of Rachel Stamp for example, what would it be and why?