Soundsphere magazine had the chance to speak to drummer Jordan Mancino, as he discussed his new group Wovenwar, leaving behind As I Lay Dying and starting a band at square one again. 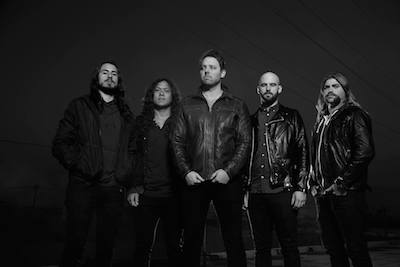 Inside a US courtroom in May 2014, a gavel hits a block and with that decisive sound, two things happen. One is that As I Lay Dying vocalist Tim Lambesis, is sentenced to six years in jail for an attempted plot to have his estranged wife murdered. The other is that the remaining four members of AILD, chose not to continue under the successful and recognisable name anymore, but instead form a brand new band called Wovenwar.

Lambesis’ downfall came when he met with an undercover police officer posing as a hitman, who received US $1,000 from Lambesis for the deed. Unaware that he was being recorded, Lambesis explicably stated that he wanted his soon-to-be ex-wife, Meggan Murphy, to be killed.

In a quandary as to how they would proceed with their livelihood, Mancino, along with guitarists Nick Hipa and Phil Sgrosso and bassist Josh Gilbert, reached out to their friend Shane Blay of Oh, Sleeper, to perform vocals in Wovenwar, thereby cementing the line-up of the full-time project. Not standing on ceremony, Wovenwar are set to release their debut self-titled album on August 4 and are currently beginning a world tour, with UK dates in August and October.

Despite Wovenwar being 80 per cent made up of As I Lay Dying members, the tough decision was reached to forego the name that had earned them massive success, including selling over one million albums, earning a Top 10 debut on the US Billboard Top 200 with 2010’s ‘The Powerless Rise’ and a Top 15 debut with 2012’s ‘Awakened’. As Mancino discusses, the choice to leave behind six studio albums, 14 years of hard work and a dedicated fan base, was ultimately the right conclusion in their eyes.

“That was something that we debated even before Shane was in the picture”, states Mancino. “It was unanimous that we didn’t want to continue being As I Lay Dying anymore. We simply wanted to preserve the legacy that we had built. It’s important and genuine to do that and not ride it out as long as we could, just so we could have some sort of an advantage. Even stylistically, we didn’t want to do AILD Reincarnated. It felt more honest for us to move forward and start something new in our lives. This circumstance warranted that decision.”

While still in the same genre of heavy metal that As I Lay Dying now rests, Wovenwar’s music sets out to differentiate themselves by being a touch more streamlined, melodic and accessible, as showcased by spots on the Reading and Leeds festivals this year and a support slot with rock giants Black Label Society and In Flames.

Their tracks ‘The Mason’ and ‘All Rise’ can already be heard on the band’s website, which augment Wovenwar’s desire to not become AILD 2.0. Even the fact that the band didn’t want any poster or album cover to mention anything about a ‘supergroup’ containing members of As I Lay Dying and Oh, Sleeper, is a testament to Wovenwar’s aspiration to start from the very beginning, like any other new group.

“For us, we wanted to build Wovenwar the same way we built As I Lay Dying, just by grassroots, touring, playing shows and capturing people in the moment”, explains Mancino. “We’re not trying to mooch off our past. We want to be authentic about what we do and not rely on our history to build a fan base. We want fans that are as passionate about the music as we are. It makes us even hungrier to win people over. It’s a pretty cool feeling and it’s something that we’re ready to do.”

Wovenwar’s self-titled debut album will be released August 4 worldwide and is available for pre-order.

Check out www.wovenwar.com for tour dates and further details.

Thanks to Jordan from Wovenwar and Andy from Metal Blade Records.