Cybercide are one of the fastest rising acts on the international Goth scene right now, after catching up with the guys a few months before 2008 came to a close, we wanted to get an update on their progress and plans. 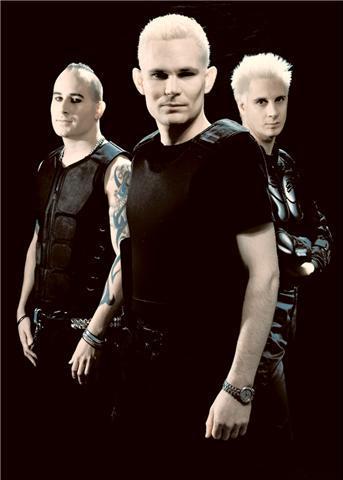 “We don’t expect this to last forever, and so we are just enjoying every moment while it’s there for us”

Vocalist Eddie Martin is particularly looking forward to putting out the band’s next album, which looks set to be released on their own record label Threatened Witness as a CD/DVD Digipak as well as a download ready in September. “On this new album [Signals] we are going back to our roots, it’s sounding a bit Fields Of The Nephilim-esque in places,” he explained, “A lot of this record is going to be darker than before.” He adds, “the title seems to fit, it centres around the obvious, like the hardware and programming that we use, but in the case of ‘Signals aka Protect Your Hardware’ the title track, we wanted to look at how messages get distorted by the contemporary media – how often, even though something that is said may originally be positive, the message that gets through can be far from what was intended.”

We can confirm that the album will have around 11 songs and it will be produced by Justin Morey, who worked with Cybercide on their debut ‘Adrenalin’ and has also worked with VNV Nation on a number of recordings. Some of the working titles for the new album alongside ‘Protect Your Hardware’ will include ‘Silicon’ and ‘Velocity’. Eddie and co. are very much looking forward to unleashing the new material, “Now we have a guitarist in again, it feels like we are back to normal, without him our tracks were a bit too nice when played live – everything we write have written has always had guitars in mind.”

Despite the songs themselves having a heavier edge this time around, Eddie assured us that the group will not be taking themselves too seriously, “we have [Signals – Protect Your Hardware] or ‘The Condom Song’ as our following refer to it, and it’s proving to be really popular live. We found out that Cybercide was a computer virus, so for a laugh we had some Cybercide condoms made up to hand out at gigs, with ‘Protect Your Hardware!’ written on the back.” He continues, “Every band on this scene needs to watch VNV Nation on a weekly basis and some bands need to remember that the stage doesn’t come with them when they leave it. We don’t expect this to last forever and so we are just enjoying every moment while it’s there for us.”

Amongst the many things that Cybercide will relish this year is the experience of returning to Europe. In February, following a date in their hometown of Leeds, the group (which now includes former Dirt Models guitarist Barry Carrera) will play dates in Lithuania, Latvia and Poland before joining Combichrist as support for their tour of Russia and Eastern Europe in March. Eddie comments, “In some of the former Soviet States that we will play, they don’t get much live foreign music, and they can’t always afford to pay for you to fly over unless you already have a good reputation, so we are very fortunate to have made so many wonderful friends, who support us. We admit that we have been very lucky, but we have also found that you have to make your own luck, and the more we work, the luckier we seem to get.” Eddie continues to reflect realistically upon the future, “The thing is, in this industry most of the time whenever you think something good will happen it’s pulled out from under you, so you have to really believe in what you do and really put the work in because it is all too easy to lose heart.”

The band have high hopes for the release of the new album, and with a likely short tour of the United States and Italy coming up alongside the aforementioned dates, the three-piece will be keeping their feet firmly attached to the ground, “touring is not necessarily glamorous, but we are thrilled to have these opportunities, and the greatest thing about what we do is that we are allowed to share the art that we make with others – the fact that we get to do that, and that people enjoy it is more than enough for us.”

Of course, at the heart of Cybercide is Leeds, and Eddie (who is currently based down South in Kent) is quick to remind us that there is a Northern soul at the core of this cult electro-Goth outfit. “Leeds was the first city that was good to me, and it’s always been Cybercide’s home, and we love it,” he adds.

Commenting on the resurgence of the Goth scene in Leeds, “Bands in London don’t often get off their arses and try and get out of the door, so they don’t receive the recognition their music might otherwise deserve – there is so much history and passion in the Northern scene and Leeds has always attracted great musicians, so we are very proud of the city and its culture.”

The band are currently working in the studio recording ‘Signals’. Cybercide will play THE SUBCULTURE in Leeds on February 6. For more information please visit the official Myspace and website.