Day Of The Sirens

Home » Day Of The Sirens

Day Of The Sirens is a band who are looking to grab the UK’s alternative rock scene by the neck and shake it to its very foundations this year. We chat with vocalist Jack Fox about the unit’s latest release and some plans for the rest of 2011. 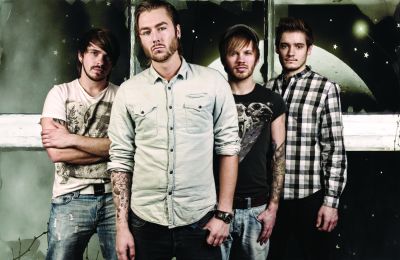 “We are the Simon and Garfunkel of alternative music”

S] What are you looking forward to most about taking your live show up north again?

J] “In November and December of last year, we did a full UK tour which took us to Sunderland, Lancaster, Glasgow, Edinburgh and Aberdeen and can’t wait to come back. For us playing live is a completely different entity to being on record. We put so much effort into making our live show a spectacle and making it as big and epic as possible rather than just going on stage and replicating what you hear on record. Being able to do this all over the UK is a dream for us and can’t wait to get back up north again.”

J] “We’ve got a very busy year ahead with the EP release in February, single and video out in March and a full UK tour in June and July. I think our main aim as a band is to get greater recognition across the UK. We’ve been fortunate enough to get a lot of good press recently but that is all for nothing if we can’t impress people live on the road so our main aim is to make sure we make an impact in every town we play! We’d also love to be playing some big festivals this year!”

S] Tell us about the writing process – do you take inspiration from people and places?

J] “If I’m honest when we started Day Of The Sirens in 2009 the whole thing was a bit alien for me. Having mostly been in three-pieces pieces before, I was use to writing everything, telling everyone exactly what they should be playing and generally dictating everything. With Day Of The Sirens it’s like a massive filtering process with me bringing a general song structure or idea to the table and the rest of the guys beating the whole thing into shape. At the same time Chris [Morley, vocals and guitars] is an amazing songwriter and for the first time on ‘Nyx’ we actually sat down together and wrote from scratch. We like to think of ourselves as the Simon and Garfunkel of alternative music. Lyrically, I don’t like to spoon feed people what I’m writing about, but when you listen to the new EP you’ll hear a lot of references to films.”

S] ‘A Kiss From Nyx’ is going down well in the press – what’s the story behind that record?

J] “With our last release the term ‘epic’ got thrown around a lot but at the same time we pride ourselves on writing catchy and accessible music. With ‘A Kiss From Nyx’ we really wanted to take that one step further making everything sound even bigger and focusing more on memorable hooks and choruses. My favourite two tracks on the EP are ‘Dark Days Part 1’ and ‘2’. We had an idea of making both parts completely polar opposite which is why ‘Part 1’ is probably the most commercial thing we’ve ever done and part two is the most brutal and heavy thing we’ve ever done. I think people will be very surprised when they hear ‘Part 2’!”

S] ‘Alois’ is a song that many people will be introduced to you with, and it is perhaps your anthem – what inspired that track particularly?

J] “‘Alois‘ is a funny one for us really as it was actually released as a precursor to ‘A Kiss From Nyx‘ and was due to be on the EP. But, when we sat down in the studio and listened to the whole thing back, it just wasn’t good enough to make it on the record and was weak compared to the rest of our new material so we gave it the boot! I still think it’s a good representation of us a band so if that’s the first thing people hear and see when they check us out I’m still happy with that. The song is about memory and I actually wrote it about my Grandad who is an Alzheimer’s sufferer and how important memory is in making you the person you are.”

S] How will your next material develop the DOTS formula?

J] “We’re writing new stuff all time and we’ve probably already got enough material in the pipeline for about 10 albums but as for the next release, I think I speak for the rest of the band when I say that we just want to keep developing and improving our sound and don’t think we are by any means the finished article yet which is exciting.”

S] Things are looking up for you guys at the moment, but can you talk us through some of the biggest challenges that you have faced as a band?

J] “Like any band we’ve had management problems, been promised stuff that hasn’t come into fruition but I think what has not only been one of our toughest challenges has also been our saving grace. When you don’t rely on labels to do everything for you, you work a lot harder as a band and it’s twice as rewarding when you get something out of it.

Unfortunately, we are in a time where it seems only the bands who have rich parents who can throw money at press agents and PR companys to get their name around that are making progress in the industry but the industry is also to blame. When the media side of the industry refuse to deal with bands directly or will only print or write something on you if you pay them, it makes it all the harder for bands without money behind them to make headway. We’ve been lucky enough to build some bridges with some influential people in the industry through our own hard work and merit and not by paying them. That is something I am very very proud of.”

S] On a similar note, what keeps you most inspired to keep making music and developing your sound further?

J] “I think I get mostly inspired by our fans. We make a big effort as a band to stay close to our fans. Every time we play a live show or someone tells that they enjoy what we do makes you want to keep on going as long you can. A general theme we keep hearing at the moment is that what we are doing is refreshing so, I think it’s important when developing your sound to also stay true to what you are rather than following the latest fads and trends.”

S] What’s been your defining moment so far as a band?

J] “Gig-wise, when we played the O2 in Birmingham last year, that was pretty unbelievable to play such a huge venue. Also recently, the drummer from LostProphets sent us a message on MySpace saying how much he liked our EP and what we were doing. It’s an amazing feeling to know your music is making an impact, even amongst a massive band like LostProphets.”