In our latest band spotlight, we talk to Chris Catalyst of Eureka Machines about what the band means to him, the impact of PledgeMusic and how the fans have inspired the music of forthcoming album, ‘Brain Waves’. 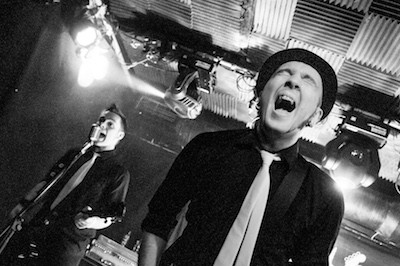 S] Can you talk about the inspirations behind this record, and what it means to you guys as a band?

Chris] “This particular album has more of a theme running through it than the other three. It’s mostly about the struggles that many of us face when we’re thinking (or, for that matter, drinking) a little too much. The day-to-day struggle is a topic favoured by most songwriters, but I think we’re approaching it from a different angle, and working out how to deal with it.

As I head directly for my mid-30s, I feel like I’ve worked out how to keep myself in my own good books, and there’s always a way to do that, even though it doesn’t always feel that way. But you have to want to do it, and you have to offer yourself up for it. That first step can often be the hardest, mind. Most people seem to struggle through their 20s trying to work out what their role is in life. I feel like I’ve sussed that out now, and it’s that your role is to be the most YOU that YOU can be. Sounds trite, and it is, but it’s true. Once you suss that, it’s like you’ve been given the keys.”

S] How do you feel about the reception to the Pledge Campaign, and what does that mean to you?

Chris] “It means everything. In the grand scheme of things, we are a tiny band, but the people that care really care. That means far more than having half a million people who quite like us. It’s a two-way thing – we try and be extra nice to the people that come to see us and buy our stuff, and that seed germinates, albeit very slowly! People being willing to part with their hard-earned cash to fund our records – especially in the current climate – is a huge deal to us, and we intend to repay them ten-fold. It worked out pretty well last time, so we’re hoping to do it again this time.

It’s a cliche, but the band comprises of every single person who supports it. That’s me sitting and writing the songs, just as much as our pal Matt who comes and drives us sometimes for a bag of chips, Damo who does our website, Glenn who helps with flyering, just as much as it’s the people who’ve bought the records and come and see us. All the best bands have a community around them, and I’m proud to say it’s the same for us.”

S] How has the band dynamic changed since you first started out until now – are you still best buds?

Chris] “Absolutely so, I mean, it’s different these days as Wayne [Insane] and Dave [Davros] are both fathers, and that has to be priority, and the other three all have day jobs – at least, more conventional day jobs than mine – so we’re realistic about it, but yeah, we do this because it’s a laugh. None of us really get paid for this, other than the odd curry or beers, so it has to be fun. And it is.

I realised earlier today that I’ve been making music with Dave on and off for 15 years now, which is a bit ridiculous. We’re all four like a married couple sometimes, with all the good and bad elements of that! But ultimately with all the love in the world.”

S] Can you talk to us about the new album – what intimate details can you share with us at this time?

Chris] “It’s heavy, I don’t mean in a Megadeth way, fortunately, but it definitely gets dark in places. The songs are pretty mean, we’ve cut out a lot of the chaff and we’re leaving the penny whistles at home this time, but the songwriting is fairly adventurous at times. It’s all the best bits of the first three albums, but with the maturity – ouch – that’s come with being a bit older, being a bit more bothered about the important stuff and a lot less bothered about the fluff.

We’re lucky insofar as we genuinely write this stuff for ourselves, another cliche, but it’s true… Obviously we want to make it as fantastic as we possibly can, but we really don’t give any kind of a fuck about fitting in with any particular scene or genre or style, and that’s pretty fulfilling. We always try to put a positive spin on things so the album will end with a nice nod to the future.”

S] ‘Remain In 80s’ is the covers EP you guys just put out for the Pledge campaign – how much fun was that to pull together?

Chris] “All of the fun – we’ve played a few gigs at mates’ parties where we’ve learned a bunch of covers for a doss. The 80s was such a great time for pop music as people were still taking risks and writing amazing and occasionally really weird songs. No focus groups or measured key changes or Simon Cowell. Just genuinely brilliant tracks like ‘Walk Like An Egyptian’, which is surely one of the weirdest number ones ever written. I loved doing that one, especially the Carlos Alomar guitar break. ‘Goody Two Shoes’ came out really great too, I love how that sounds like a party. And ‘We Didn’t Start The Fire’ was hilarious and horrible to do, but came out great. Doing that song was basically a dare. It’s got seven choruses, for fuck’s sake.”

S] Which one was your favourite cover to do and why?

Chris] “I loved ‘Kids In America’, as that’s one of my all-time favourite songs. It’s got an amazing chorus and really simple.”

S] Eureka Machines have been gigging around your regular shows with Ginger, and the occasional Sisters of Mercy appearance – is it more of the same for 2015, or will we see Eureka Machines a lot more?

Chris] “In 2015, I want to concentrate on my stuff really. But I’d be dim to say no if a decently paid tour came up. Eureka Machines is never going to be anybody’s living, so I’ve got to be sensible. I’m doing a lot more backline teching these days, which is funner than it sounds. All this EM activity is taking up a lot of everyone’s time at the minute and I appreciate that they can’t all do this all of the time, so I would imagine my long-awaited – by me – solo album will put in an appearance in 2015, probably later in the year.”

S] What advice would you give to musicians coming out of smaller towns and cities like Beverley, Pocklington, York or Hull who want to make a success of themselves, as you have?

Chris] “Working hard – and knowing what is the right thing to be working hard at – is the only way of getting anywhere, no matter where you are from. The internet has made the world a far smaller place, and you don’t have to move to London any more, but what I would say is that you won’t learn a lot being a big fish in a small pond. Being open to learning and growing is essential for any kind of progress, because as soon as you stop growing, you start dying. Honestly? I would weigh up your priorities and see if there is a future in what you are doing in the town where you are from. I’d say the same to people in Leeds, too, where I am based now.”

S] is there a song you’ve been working on from the new album, that you feel perfectly defines where Eureka Machines is at now as a band?

Chris] “I like all the new songs, but there’s one in particular called ‘I Miss You’ that I hope people ‘get’ when it comes out. There are a lot of layers and levels on this album. That one is a weird one, I wonder if people will like it. Fortunately there are a bunch of the usual three-and four-minute pop songs as well!”