Earlier this year we stumbled across the Facebook page for the Laundry Room Studio in Seattle. This studio has quite the history recording bands like Nirvana and the Foo Fighters, so we had to get in touch with its owner Barrett Jones to discuss some of the highlights of owning such a gem of a studio. 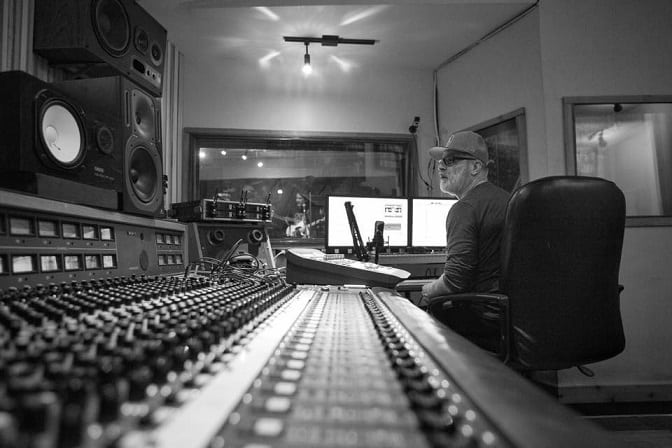 S] Although founded in 1984, the idea must have been present in your brain from at least a year before. What made you want to start recording bands? Were you in bands yourself before wanting to become a producer?

I started recording my own songs around 1981 or so when I was 15. I have always been in bands and I started to buy more gear to record myself and got into the process of recording. So by the time I had amassed a Tascam 34 (1/4” 4 track reel to reel) and a mixing board in 1984, I decided I’d like to record other bands to help pay for the gear. I never used the term “producer” until an agent starting in 1995 represented me.

Your first studio was set up at your parents’ house. How did they react to you recording heavy bands? Were they understanding?

My parents were supportive of my musical endeavours and didn’t mind the hardcore punk bands that came in to record. I moved out by 1985 so I wasn’t there too long.

Now the equipment used in the early 80’s for your studio seemed very simplistic and raw. Can you explain why you chose such equipment and also the pricing of recording at the time. Were you seen as a cheap/punk alternative to higher priced studios?

I used whatever I could afford. I figured if the Beatles could record on 4-track and make it sound good so could I. Yes, I was definitely the punk alternative to the higher priced studio.

The studio has had quite a few different locations. Do you feel like this has ever affected the sound of the music being recorded?

Every location has had its own unique sound. Some I have liked more than others but all have been good! The size of the room and its configuration will always have an impact on the sound.

In the studio’s long history, is there any one day that really stands out? Any cool stories you may wish to share?

There are way too many to go into but I will say that the first time Dave Grohl ever recorded a song of his own (Gods Look Down) with me, I was totally blown away! He played everything on the first take, first the drums, then the bass, then a few guitars and then sang it. The whole song took about an hour and to me it was SO good! There are many other times over the years that I knew magic was happening in the room with different bands that I was working with. Those are the moments that keep you coming back for more.

Was the atmosphere on the day of recording the X-Files soundtrack with Foo Fighters at all spooky? I imagine it was quite a weird piece of music to produce.

The song we recorded for the X-Files soundtrack was ‘Down In the Park’ by Gary Numan. It’s not that spooky of a song really, we were just trying to capture the essence of the song and make it a Foo Fighters song as well. That whole session was a blast. I believe it’s the only song released that has the original line up on it.

How was it recording a band such as Nirvana?

The three songs I recorded with Nirvana were after ‘Nevermind’ was released and was a very chill session in the house that I shared with Dave and my girlfriend. The band just started playing and came up with a couple songs on the spot, plus the Wipers cover ‘Return of the Rat’. It was clear to me that they were unique and great when I hung out with them during the recording of ‘Nevermind’. I got shivers when I listened to the playback of what they had done. I knew they would be big.

Can you give some pointers on how to get such a big drum sound? Listening to the King Buzzo record, the drum sound is just incredible.

99% of drum sound is the player. Dave could play any kit and it would sound huge because that’s how he plays. The kit on the King Buzzo EP is my studio kit that I’ve had for 35 years and is a cheap Japanese Royce kit. Very thin shells, with a 20” kick, 13” rack and 16” floor. This is also the kit he played on the Nirvana songs I recorded. The most important thing any drummer can do to sound good is make sure that the kick and snare hits are solid and even, and that your cymbal hits are only 20% of all the power. If you’re smashing the fuck out of the drums you do not want to do the same to the cymbals.

Skipping forward twenty years now, to your current home for the studio, do you see this as the final base for Laundry Room Studios? Looking at the floor plan and pictures, it looks pretty cool.

I bought this house to put the studio in. It’s a great space and has a very comfortable vibe to hang in. I do not plan on moving the studio again.

Check out the studio’s website and Facebook page, live sessions are broadcasted regularly from the studio and they are open “always”. http://www.laundryroomstudio.com/