“I wasn’t even sad anymore,” says Harry George Johns of Brawlers, reminiscing the turning point when the apparel of his new punk outfit fell into place. ‘One item at a time’ is one way of describing the process, but considering the chilled and organic nature of the man’s demeanor, it’s safe to say that it was flung over him ‘Wallace And Gromit’ style when he was least expecting it, and he looked from side to side and said, “Fu** it”. That’s our theory, anyway. 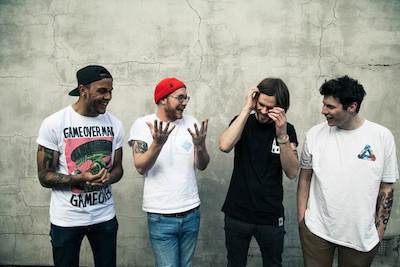 Here, we talk to Harry about the personal influence in the music. As they say, suffering breeds art, and this man has had his share of it: “I look back now and I feel a bit embarrassed that I let myself be consumed by things like drugs and alcohol, and blaming it on something like love. You’ve gotta go there to come back. I spent the majority of last year being as sad as those Harry George Johns songs sounded. I had nowhere to live, no money, no job, my girlfriend left me…it was fucking sh**. When I look back, I was so fu**ed up.” Johns goes on to talk about how that time frame influences him now. “I wouldn’t be doing this if I didn’t do that. Even though I write everything in Brawlers, I know through doing Dinosaur Pile-Up what not to do; don’t alienate band members, don’t go on a power trip just because you write the majority of the stuff, because that doesn’t mean you are the leader. Bands I love aren’t just one dude, they’re bands. What we all love about Brawlers is that we feel like, in the least narcissistic way possible, that we represent the idea of just four guys, playing music – come fu**ing have a beer with us, we’re gonna play rock ‘n’ roll, and we’re gonna play it with heart, and we’re gonna put on a show, and remind you of the good old days.”

“Brawlers is about Now. It’s not about pastiche, it’s not about reflection, it’s about ‘let’s fu**ing go’. I want every day to be a Saturday night.” This explanation might put your expectations parallel to that of the music in the charts, but when you hear the material that this band have to offer, you’ll see that there’s much more to it, and not just musically. Johns claims, in true punk fashion, that “Brawlers is not about reinventing the wheel. The record is six tracks long, and it clocks in at like nineteen minutes, if that.” Wait, what? An album already? But…but…how? “The only reason Brawlers has come together so quickly is because the music’s good. Over the years you just try to be nice to everyone, but at the same time, everything’s so internet-based now that you can make a song and get it to six record companies in twenty-four hours, but if it’s not very good no-one’s gonna give a fu**. So you could say that Brawlers has lifted off because of Harry’s old band, but it really hasn’t, because if that was the case Harry George Johns would have done a lot more than it did and Dinosaur Pile-Up would have gone a lot further than it did. It’s not about that. The product is good and reflective of how people feel. It’s happened because it’s good, I hope.”

Delving further into the album deets, he reveals that he “Cannot wait for the main track on the record”. Hmmm, what to expect of that? “It’s called ‘I Am A Worthless Piece Of Sh**’. It’s two and a half minutes long and it’s the best piece of music we’ve ever done.” Colour us enthralled! But that’s not all there is to look forward to, there are tracks already out there, ‘Instagram Famous’, to name but one (of the two): “That song is essentially about a girl who I went out who forgot to tell me she had a boyfriend. It’s about turning those feelings into something funny rather than getting sad about it.” He continues, “Every day people are going on Instagram or Facebook and getting pi**ed off with it or loving it, but whether you like social networking or not, it exists. There’s a lot of weird sh** going on on the internet. I don’t understand how there’s a league of beautiful women out there taking pictures of themselves and saying ‘Oh my God I’m so fat and ugly’. It just doesn’t sit right. Instagram is crazy. It’s so good and it’s so sh**.”

How does one go from delving into the torments of the human soul to feel-good, f*ck everything, jump into a crate of beer and laugh vibe? “I wrote a few songs that were more about just partying and were a bit less personal. We really like the first Strokes record, and we also really like bands like The Vaccines and The Stooges. Matt [Wright – guitar]’s band is the opposite of simple, it’s detailed and layered, and what I was doing was really personal and soft, so we were like ‘Let’s get together, start a rock ‘n’ roll band, get out of our comfort zone, and just bash it out’. So we just did that, and less than six months down the line we’ve got a record out, we’re touring, and everything’s going real good.” Will you have the chance to see the band in your neck of the woods soon? Chances are, you damn well will. “The tours we’re going on next year are fu**ing insane. From January it’s just tour, tour, tour. Nothing else. Not just the UK, but also we’ve been given some openings to play America and Australia, so it should be pretty hectic. 2013 is the year Brawlers kicks the fuck out of everyone. It’s here and now.”

So what does Harry get up to in his spare time then? Well, the music sure is important to the man, it comes before first, if that’s possible. Probably not. “I love cooking. I love food. I study literature so I’m always gonna be a book nerd. But I’m very blinkered all the time. It’s just Brawlers, there’s nothing else. I go home, write songs, we rehearse, we play shows…I don’t wanna do anything else. Music consumes everything I do. Right now I’m gonna get drunk with my friends, but then I’m gonna come home and write a Brawlers song and go to sleep.” The mark of a true musician! What will people make of the vibe, we wonder? “We’re being misconstrued early on as being an aggressive band, and we’re not, we’re just positive and we wanna party and we wanna bring back old values of rock ‘n’ roll. People should be excited, and people should be intimidated as well, because that’s what rock ‘n’ roll is.”

As you would imagine, a man with such an internal cache of experience has advice for the musicians, and taken to an all-encompassing level, everyone else involved in the industry. “Don’t take anyone for granted. Be awesome to everyone. If a sound guy helps you out, shake his hand and get to know his name, if someone gives you a lift to a show, buy them some chocolates and make them know that you appreciate it. Help everyone out. If this platform fell apart I’d be up sh** creek. We’re all here because we love music. We’re all on the same team.”

With the album out in February, and a plethora of shows and festivals planned for 2014, it looks like Harry George Johns has his mindset right where he needs it to be. “Right now I’m vehemently single, vehemently partying, and vehemently having fun. I wanna be in a band that reflects that.”