For our latest band spotlight, we catch-up with world-beating Sheffield-based indie rockers Hey Sholay. Guitarist Laurie Allport talks us through the band’s plans for 2012. 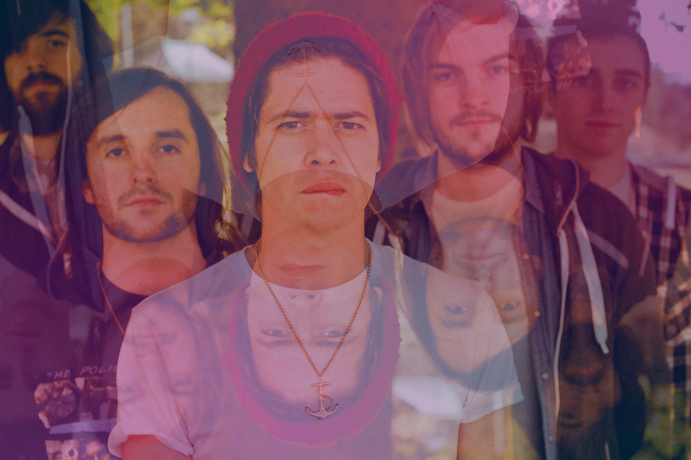 “We’re getting out of the hamster cage, and into the world”

S] You’ve got a mini-album due for release at the end of this month; what can you tell us about it and how it came together?

L] “Well, now we’ve delayed the release a little to make improvements… so we will keep you all posted. The session began as an EP recording, which quickly evolved into a way bigger project for us. It’s self-funded, but we felt it was worth the investment eventually. It shows a familiarity but also a growth.”

S] What do you hope your fans, old and new, gain from hearing the sounds of the mini-album?

L] “We hope they gain some basic understanding of ‘universal vibe’, and realise that we are all vibrations of matter. Then a genuine happiness may be achieved. We also hope they gain a dry smile from listening to it.”

S] Recently your Facebook page has posed the question: vinyl or digital? What’s the story behind this, and what’s your personal preference?

L] “Vinyl as a release to purchase. It has a wider sonic spectrum than digital formats – therefore is closer to the original performance. And when you buy a record, you want to get lost within the package and the mythology – you have more chance of ‘getting it’ then. Digital is nice when you don’t have a needle for your record player. Or, a Wurlitzer in your car.”

S] Your material is issued on Fierce Panda. Was it important for you to find a label with strong indie credentials, and why?

L] “Being a band of relatively low prestige in its beginnings – it is important not to spend too much money that isn’t ours. So we self-fund everything to keep control. We love the Fugazi approach to music – though can’t fault larger labels as a power and entity to promote better territorial exposure. We love the DIY ethic of independent labels – but are not overzealous and wearing Che Guevara t-shirts screaming ‘sell-out’ to those who don’t play in pubs any more. Fierce Panda proved to be of wonderful assistance in our development and profile boost.”

S] And you were involved in the Pandamonium event they’ve recently staged. How did that go?

L] “It is always a pleasure to play these shows for Panda. They have taste in new bands that pass through. A good night was had by all involved!”

S] Your songs have so far been championed by the indie media. How do you react to receiving these endorsements?

L] “It’s very kind and invaluable for helping people who are interested in listening to, and discovering our music. Word of mouth is always flattering when it helps us to grow our fanbase.”

S] It’s fair to say native cities of Sheffield and Leeds both have strong musical heritages. How much of your sound is influenced or inspired by where you come from?

L] “We hadn’t really considered that before. As rich and fruitful as the respective cities are culturally, we deliberately avoided these pedigrees.”

S] Do you have any other influences to your music? Can you tell us who they are?

L] “We all have contrasting tastes in music at times, and rather than an influence in style or genre, we take influence from approach to writing music. We don’t write a song and then add over instruments. A dynamic in a song is achieved through long repetition on a theme or idea. It then grows if nurtured correctly. Noises and samples often influence a song rhythmically rather than a riff or beat. Our approach to music is influenced perhaps by the more unorthodox bands, in comparison to our style.”

S] 2011 saw Hey Sholay perform on the European festival circuit. Where are you planning to take your live set to in 2012?

L] “We’re getting out of the hamster cage, and into the world.”

S] What about other plans for the year ahead? We hear you’re appearing at a prestigious award ceremony quite soon…

L] “We’re very lucky to be playing at NME awards on February 22 at KOKO in Camden. We are starting to book shows this week, so will be constantly updating the websites and SNS.”

L] “Black Pepper? Oh, and there is a free track to download from our Facebook page right now!”