Ten years ago, Idle Jack And The Big Sleep graced the city of York with an epic explosion of unadulterated local music at its finest and are back to play their first gig together in five years. The band’s reunion is a one night only event on December 12 at Fibbers that’s sure to blow minds. We talk to Rob Hughes and Mike East about the gig and their feelings on the band’s music and influence in the York music scene. 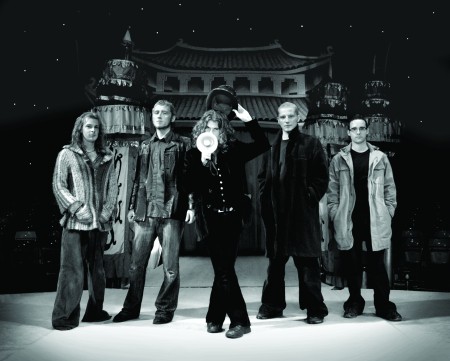 Thanks to years of dedication and hard work, the band have developed an incredibly loyal following, making this gig a highly anticipated event for music lovers around the city. After not playing together as Idle Jack And The Big Sleep for five years, we ask what prompted this reunion now. Rob explains, “We really all missed the music. A lot of people have gotten into us since we broke up so a lot of people never got to see it. I’ve really missed the guys, but I don’t want to do it any injustice. I know we fell apart quite spectacularly, but I think this will be worth doing.”

On the topic of the one-night reunion blooming into something more, Rob adds: “We will say this. It is a one-time deal, one night only. However there are songs that we never played that we regret not playing. Songs on the second album that we’ve literally never played together. ‘Fire Flower’ and ‘When The Moon Goes Boom’ were all constructed in the studio so we’ve never heard what they sound like live so it might be nice sometime next year, maybe around about May next year to do just a nice quiet gig to commemorate that. We’ll see how this goes first of all.”

To build on the anticipation of what’s sure to be a legendary show that boasts the showcasing of the very best of albums ‘Stone Tape Theory’ Volume 1 and 2, Mike adds “There won’t be anything at this gig that will be ‘filler’. Every single thing is going to be fucking epic in the choice of songs.” Rob explains, “If you love the band, if you liked a couple of songs you should definitely come to the show because it will lift your spirits. If you’ve never seen the band before and you just care about the York music scene or if you just like music you should not miss it.”

Through the days of Idle Jack And The Big Sleep, the collaborative “DIY” scene in York was very much present and continues today with countless bands self-promoting and selling CDs on the street. Rob explains what the York scene was like when Idle Jack first came to life. “At the time we started there was just five guys, but there were so many people. There was kind of a scene around us trying to get it together with the artwork and the website and everything. There were so many people doing the filming and photography for us and all the other musicians that played with us. I haven’t said this in years, but at the time people kept going on about the new Yorkshire scene and that York was the Greenwich Village of that and at the same time you had Cardboard Towers and Cardboard Radio and there was a real collective scene. One of the other reasons I wanted to do this now is because it’s starting to happen again in York. It’s got its detrimental side because York is absolutely saturated with music which has its pros and its cons, but people are really pulling together.”

Through changing times, both in the music scene and personally, Mike reflects on Idle Jack’s time together. “For the closing period of Idle Jack, we basically finished ‘Stone Tape Theory: Volume 2’ and if you’ve heard that album then you will know that it was a mammoth undertaking to do a double album of lots of really long progressive songs. We bled to make that album, it didn’t come really easily. It was tooth and nail. We fought over the littlest things to make it what it was. And it is what it is because of that which is a good thing. Every last bit of inspiration went into that album. When it was all done and dusted and the album went out, we went back to the practice room and we just didn’t know anything. We kind of felt the only way to get the wheels of inspiration rolling again was to disembark from that journey and do other stuff for a bit apart from each other. There was never a falling out, we still managed to be really cool mates and support each other through it and not be acrimonious in any way. The very last thing that was left out of that was that we were all still mates, after everything was dismantled.”

Rob explains, “That’s not to say it was easy at all, so much darkness came out of it. But it was never directed at each other. When that album sank, our hearts sank with it. I always said about Idle Jack, it was like the greatest ship that never left the harbour. It was the most amazing creation, but it was just too heavy to move.” Ten years after their formation, the band still attach certain emotions with different songs that they poured so much time and energy into. Rob explains some of the songs he loves and hates. “I’ll always hate ‘Spark’ and I think that’s because I spent so long trying to rewrite it and then Rob East came in and did that riff and that was all it needed. ‘The Great Unravelling’ to me is the one that makes me miss it. The saddest sound in the world is me sitting on the edge of my bed playing it on my own being really sad. That’s where my heart is because it’s a song about the band breaking up before we even broke up so it’s predestined.”

Mike adds, “I don’t often listen to the album, but when I do it makes me wonder ‘what the fuck is this band all about?’ I was in it and I don’t even know. I think it’s because we just did what we wanted instead of thinking we need to make a band and be this kind or that kind and we kind of spliced our influences together. It’s all there for a reason, but the reason escapes me.”

As somewhat of a veteran of the York music scene, Mike offers advice to budding musicians based on his experience with Idle Jack. “You have a choice to make in my opinion. Either you want to fit into this niche, so you become a little fish in a massive ocean. Or you can just think ‘I’m going to do what the fuck I want’. Loads of people might hate it. My other band, Ishtar is a really good example of this because I really liked it and my band liked it and we didn’t give a fuck if other people didn’t. Do you want to be a little fish in a massive sea, which is the internet? Or do you try to do something different and stick to your guns and become well known for being really different. My advice is make a good choice.”

With the New Year fast approaching Mike and Rob tell us some of their plans for the future with their respective bands. Mike says: “At the moment Ishtar is in its slumbering state. This new project is me and Rob [East] and Greg [Parsons] from RSJ and Mike McLeod [who performs with Aimee J Ryan] and our band is called Wolf Crows. It’s in its infancy and it’s going to shatter the planet.” Rob moves on to explain the new direction he’s taking for new projects. “After Idle Jack sank I started drinking quite heavily which is well documented mainly through the first [We Could Be] Astronauts album, but I’ve sobered up and got my sh** together and written an album with Simon [Himsworth], the drummer from Idle Jack [who also plays guitar in WCBA]. We’re currently recording, but we’ve stopped gigging indefinitely. I’m excited not to play any more gigs for now, I’m just looking forward to this one big show. There’s nothing I’ve cared about more than Idle Jack And The Big Sleep.”

Idle Jack And The Big Sleep are known for their amalgamation of different sounds to create a kick-ass, unique rock vibe. We ask Rob and Mike how they would describe Idle Jack’s sound. Rob says “It’s impossible to answer. It’s too much.” and Mike concludes with “I think that everyone’s that listened to us should try to answer that question because it’s like a big puzzle.”