With proficient playing, classy shows, and a growing reputation regionally and nationally for great songs, why would In Fear Of Olive suddenly change their name? One answer is that the decision wasn’t actually that sudden; it was something the four-piece band from Doncaster had been working on for some time. They just wanted to make sure the new identity would be the right one. 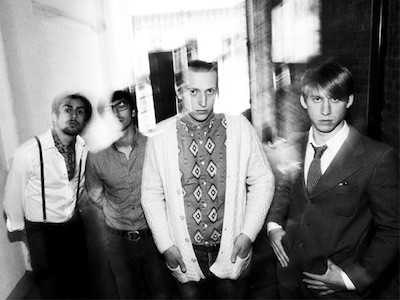 The underlying reason is pretty obvious when you think about it. Like in many interviews, the band was requested so many times to explain their name that, in time, they were bound to wonder if it meant anything at all.

To anyone who saw IFOO live, even a couple of times, the name simply meant a terrific band rather than an irritating acronym that left one clear reason to change the name. To the uninitiated it would more likely prompt a bout of head-scratching.

Welcome instead, Laurel Canyons – a name which is directly taken from the part of California which connects performers from Joni Mitchell to Jim Morrison, Carol King to Crosby, Stills And Nash. That sort of line-up says more about the band’s influences than any number of media interviews.

Catching them for the first time at Cottingham Springboard Festival a couple of years ago there was a resemblance in style and quality to earliest Dire Straits, from before the first album, the time of tour support to the Climax Blues Band and a stand-out slot at Sheffield University free festival.

But the Cottingham show was soon after the arrival of Arv Teeroovengadum, a drummer now fully-integrated, whose frenzied combination of power and precision has pushed the band’s style into an explosive new dimension creating a harder edge to the band’s recent material.

In their longer shows the band still play a bit of their quieter stuff, demonstrating the strong melodies within the stunning EPs ‘All We Can Do Is Wonder’ and ‘Saluting Magpies’, and showing the range of Jake Cope’s vocal capabilities.

Touring has been put on the back-burner recently as work has progressed on a single, ‘Youth Blood’, available in April as a CD and download from Wire Sound, with their debut album, ‘Laurel Canyons’, following in June. Dates are being arranged to promote the releases and the band are confident of generating interest around the UK on the strength of their work so far and in particular their well-received support slot on Magazine’s nationwide tour last year.

First up this Friday is Transmission at Toft’s in Hull, a new venue and a first for a band who have made East Yorkshire their second home. They’ve played a few of the Springboard venues as well as The Back Room, the Adelphi, last year’s Cornucopia Festival and The Sesh, whose promoter Mark Page, more familiar as DJ Mak, is taking them to Transmission.

“Hull has always been really good for us,’ said Jake. ‘We have a lot of friends there and we usually get a better turnout than in our hometown. I don’t know Tofts because it’s only been going for a few weeks but I’m hearing good reports and if Mak is involved then it’s bound to be great. You can’t overstate the importance of that. Mak really knows his stuff, he’s got a great reputation and he’s never let us down.”

Old fans can expect plenty of new material in a set of about an hour, including much or all of the new album and an innovative take on a couple of covers. Also expect more of Jake dueling guitars with premium player Paul J Burdett, and of bassist France Lahmar varying his stance from leaning on a speaker to pluck his way through the more laid-back numbers and then bursting into life, rocking with Arv as they punch out – hopefully – such killer tracks as ‘I’m Sure They’ll Fall’ and the awesome cover of the Johnny Cash classic ‘Folsom Prison Blues’.

Further evidence of a more energetic approach is provided by the booking of highly-rated rock producer Matt Ellis and his Axis Studio in Doncaster for the new album. Jake adds: “Matt does a lot of hard rock stuff and he’s really helped us pull the drum sound together. The new album is an amazing piece of work – incredibly strong.”

Laurel Canyons are life at Tofts, Newland Avenue, Hull, at 9pm on Friday, February 22. Free Admission with support from ET:73.

On Saturday February 23 they’re at the 100 Club in London. The only other confirmed date at the moment is a return to Springboard in Cottingham, with the King Billy on Saturday May 25.

Check out laurelcanyons.com for more dates.