Spotlight: The Anxiety Of Love

Home » Spotlight: The Anxiety Of Love

“The city’s sounds are brutal and oppressive” cried Charlie Gillett in his seminal publication ‘The Sound Of The City’. The “aural ecology” of our environments is widely discussed as impinging upon everyday experience as we traverse its spaces, an emphatic by-product of that area ‘in action’. Occupying a space somewhere between J. G. Ballard’s dystopian visions and the concrete enclaves summoned up by Throbbing Gristle, The Anxiety Of Love is every noise you thought you heard and every shadow caught in your peripheral. 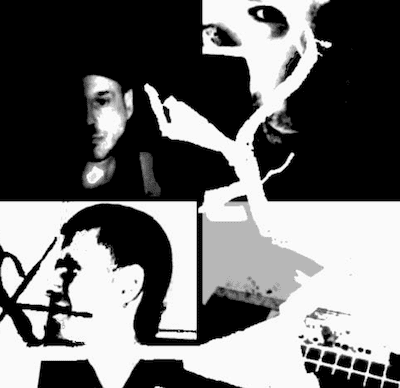 The Leeds trio – Paul Southern [guitars], Duncan Thorpe [bass], and M [vocals] – and their enviable rack of analogue and digital drum machines purvey a kind of emotionally-charged, oppressive sonic poetry examining the human condition in its most naked of states. Loosely connected with the burgeoning independent scene that sprang forth Lebanon Hanover – a brooding synth duo from Sunderland who have already made a name for themselves on the chilly dark-wave underground – The Anxiety Of Love are at once arcane and direct, archaic and timeless. Commanding the contrary, suffocating ambience of early 4AD artists and to a lesser degree, the Manchester contingent, theirs is a sound for very feeling carried dormant within each of us as we make our way across the day.

We caught up with singer and lyricist M shortly before the band’s first official gig last week. Featuring three well-versed individuals of the underground scene with ties to Red Lorry Yellow Lorry and Joan Of Arc Family, we were curious as to how the band came to fruition: “I think it was a long time brewing and was of vital personal importance to get off the ground. Both Paul [Southern; guitar] and I are inspired and driven by things that a lot of people don’t want to have to expose about their lives and their feelings about life, yet it’s not really an urge driven by choice necessarily more of overriding compulsion as was the case.” It is a telling mission statement. In the same way that Sarah Kane wrote starkly about her surroundings in near-brutal plays ‘Blasted’ and ‘Crave’, The Anxiety Of Love are something of a force of nature, a musique concrète for the disenfranchised city dweller. “[Our music] does in part reflect our surroundings, which aren’t particularly joyous or inspiring let’s say, but it is inward looking”. While it is no misnomer to consider their music bleak, M stresses a humanitarian empathy to what they do. “Misanthropy for the sake of itself is stupid; there is hope and humanity in it too. It’s not dismissive to consider what we do to be gloomy. It is. I don’t however think we choose to wallow in it, which is what separates us from others in some ways.”

Mark Twain once wrote that emotion is at its most sincere when involuntary, and with this mind we asked M about the evolution of the band’s direction and aesthetic. “I think the underlying notions were already fully formed yet the sound wasn’t. I think you shape a picture in your head of the people who blew you away first time round, people like Cocteau Twins, and it’s very hard to follow that, so we don’t.” After aborted rehearsal attempts, the trio entered the studio anew: “relatively blind and wrote and recorded on the spot, given a very limited and tight time frame, and yes, it worked against the odds. That’s how we’re pursuing it right now. To me personally, the writing process is the soundboard and yes, if it happens, what comes live will follow.”

December saw the band release their hand-numbered cassette-only debut ‘One’ through German distributor Aufnahme + Wiedergabe, a DIY mail order label fitting with the bands own sensibilities: “I really loved and indeed love their ethos: both super cool guys and with a real knack of playing the system which works. They fitted perfectly with my own views on how a body of work should be administered; this is rather oblique but, to me, pretty straightforward.” Recorded alongside a disinterested house engineer, it featured four vignettes of cerebral, drum-machined post-punk noise centred on M’s yearning and often impenetrable lyrics. It isn’t an easy listen and demands a lot from you, patience and persistence. If you are prepared to put the work in, those songs really can align themselves with you. Part of a wider “cottage industry” of labels and artists utilising new social media in the release of “old” platforms – cassette, vinyl and things that move and whir – the bands dedication to the aesthetic of their art and its merchandise is inspired.

The veritable feast of equipment at the band’s disposal – those wonderful things called drum-machines that would have every bed-bound teenager with a synthesizer salivating copiously – has already raised eyebrows amongst those in the know. Despite this, M is aware of the band’s physical and technological limitations both the arranging and performing of the material: “We’re subject to our own limitations. The drum machine is a tool, and it structures things tightly, maybe a bit too tightly at times. We use a duo of Roland 626s, which are very uncool, but if you tweak them sufficiently they can sound harsh as fists and not the soft jazz they were designed for.” Preparing for live performances in this manner of brought about its own obstacles, but after the band’s mostly triumphant set in Newcastle last Friday (in spite of power failures), The Anxiety Of Love continue as a forward-looking, uncompromising musical force. Theirs is a rather iPodded kind of world: a musical form that can synchronise itself with the listener, projecting something of himself in the face his immediate surroundings – an intersection between the warmth of humanity and the harsh “non-places” we find ourselves passing through.

With much of 2013 still in waiting, we parted company with a brief note on the bands future. With the arrival of second cassette ‘Nausea Libido’, more singles will follow in quick succession before they “start work on something more complex. Maybe some more performances and some in mainland Europe would be nice too”.

For information on the band and fellow labelmates, visit this address: http://aufnahmeundwiedergabe.bandcamp.com/