In our latest interview, we have a chat with Holly from Lancaster’s finest, The Lovely Eggs about band life and their label Egg Records. 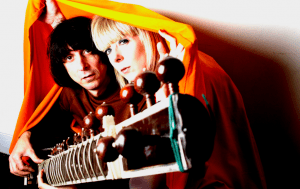 S] What are the challenges of being from Lancaster and how have you overcome them?

H] I don’t think it’s a challenge for us really, it is for everybody else that’s got involved! There is a lot of pressure on bands to move to big cities like London or even places like Manchester, or to say they’re from these places to get on and to make it in the music industry, but people have got it wrong. We were in it from the beginning, we haven’t changed what we do and we don’t let it stop us. We’re just like any other band, it shouldn’t be a hindrance where you’re from. In fact, people should just stop saying that they’re from London or Manchester or these big cities and stop moving to them. Just by thinking if you move somewhere you’re going to be more successful, it’s wrong and it’s rubbish. We haven’t felt like it’s hindered us at all, in fact it’s made us more determined to do what we want to do. It doesn’t matter where we’re from we just want to go on tour, be in a band, have fun, laugh, play live and we want to play loud and that’s what we do.

S] How did the band come together? How do you find the perfect balance between family life and band life?

H] We started our band ten years ago, me and David, we were going out then and we’re married now. We just did it for a laugh really, we wanted to play music, make music together, travel, make new friends and have a party and drink loads. So that’s what we did, because going on tour you get free booze! You get to meet loads of new, cool, interesting people, form a network and have fun, and that’s what we were interested in doing. We’re pretty much still doing that ten years on which is cool, but we’re married and we’ve got a baby now. I think you’ve really got to question in life what society says is or isn’t acceptable, and what other people do, just because nobody else has done it before doesn’t mean to say you can’t do it. A lot of people I think wrote us off when they knew we were having a baby they thought ‘that’s the end of that band’ but why does it have to be? We’ve just worked our way round it, so now we travel with a friend of ours who looks after our child (who is three now) when we’re on stage, so we have found a way round it, and there’s always a way round stuff, it’s just different. We used to have mammoth hangovers and just feel ill all day and now we don’t have those big hangovers, but we get up at half past six every day when we’re on tour, we go to bed at midnight or after hours. It’s still hard work and tiring but just in a different way.

S: You’ve got your own label ‘Egg Records’ which is what the new material is coming out on. Was it the same kind of desire to create your own content and build your own brand?

H] We just wanted to put out records and the label we were doing stuff with in the past was a really DIY label called Cherryade. They wanted to take a break from releasing just as we wanted to do more. We just spoke to the distributor who distributed their records and they were saying ‘Well why don’t you just set up your own label and just continue doing it?’ so that’s what we did. We’ve not released any other bands on that label yet apart from us because we don’t really have time, it’s pretty much all consuming because it’s a DIY sort of band and there’s only two people in it. All of our time is pretty much consumed by our stuff, but you never know in the future we might release other bands on the label.

S: How do you look back on the beginnings of the band at this point and how you’ve changed and developed over the years?

H] Obviously the music has changed because no two albums are the same and we do sound different to the first record, but genuinely there’s no difference ten years on. The reason why we do it is so we can have fun and because we enjoy making music, touring, we enjoy a party and meeting new people. So in that respect things haven’t changed, we don’t think, we don’t analyse too much and we don’t think about success too much. We really do try not to because then it calms everything  and then you’ve got expectations and stuff like that, so if you just focus on the music and just having good times. If you’re happy I think things will always go well, if you’re content and you’re on the right track that you want to be on, rather than seeing success or whatever and trying to mould yourself to go onto that path of success. I think if you’re happy you will be successful, things always seem to work out ok if you do what you want to for the right reasons. Some people think ‘it’s the destination not the journey,’ but we’re very much a band who just focuses on the journey, and who knows where we’re going? It doesn’t really matter because we’re enjoying it.

S] You’ve had a little while to reflect on the new record ‘This Is Our Nowhere,’ were there any challenges of building it and what were some of the great experiences of putting it together?

H] It was quite hard because we wrote and recorded it when our little boy was about a year old so we had very little sleep, which made it difficult when we had to just record in short verse. We would have an evening one night when you’d get your mate to babysit, a couple of hours in an afternoon when your mum would have him, so it wasn’t the way a lot of bands do two weeks in the studio, twelve hours a day, we just couldn’t do it like that. It would be impossible to look after our baby as well, so we just adapted to what we could do and we made it work. It was hard work, and it’s just frustrating when you just can’t get your teeth into something because as soon as you start doing it you’ve got to stop, but we obviously did it and it’s been very well received actually. It just goes to show that it doesn’t matter about the process, the music is still on the recording and people have got into it and got behind it, so that’s good. It’s different recording at Lancaster Music Co-op, which is a non-profit studio and rehearsal rooms where David works and it was similar to the last three albums which we also recorded there (but we had to arrange a few little bits!) but it all came together in the end which is what always happens, everything always works out in the end.

S: Can you tell me the highlight of some of the things of your career?  The memories that you’ll focus on when you’re having a rough day?

H] Well in the last year we have sold out quite a few gigs and that is always a great feeling, especially when you’re hundreds of miles from where you live. You think, ‘Shit, two hundred people in London are coming to see us next week and it’s sold out,’ and that’s crazy compared to what you’re used to. We’re always happy, it doesn’t matter how many people turn up to the gig, but thirty people used to come and see us and we were bloody elated. ‘Thirty people oh my God!’ Then all of a sudden you would get bit of a reality check standing in front of three hundred people, like the last London gig we did, which was sold out and you’re like ‘What the fuck?’ It’s unbelievable almost, so that’s a great feeling when you end up playing to so many people, and we meet so many lovely and kind people as well. A lot of people say that they have a good time when they come to see us and that’s a good feeling to make people feel happy, so I suppose they’re the highlights. I mean playing, making new friends and people being so receptive and friendly to us is great.

S: How important do you think it is to have synergy with your bandmates to want to do the same stuff? What advice could you offer to new artists about the graft and struggle of the early days of being in a band?

H] I think it’s what you hold dear to yourself and I think what bands value sometimes becomes skewed. At the core of every good band is a longevity thing and a really good deep friendship , and I think if you’ve got a good deep friendship and a love of each other then you’ll always work stuff out. Whereas, I think if you’re in competition with each other and have not got much respect for what the other people want, that’s where friction and arguments sometimes occur. I think why it works for me and David is because we love each other, and sometimes we’ll get offered a gig and one of us doesn’t fancy doing it, the other one is quite happy to accept that rather than arguing. We might have slight discussions like ‘shall we, shan’t we?’ but at the end of it we are both on the same page and I think you can’t underestimate that. If you want different things, like one wants to tour and one doesn’t, it is hard, but you can always work stuff out if the friendship or your love for each other is the most important thing.