KASMs are one of the hottest bands on the UK alternative scene now. They mix a wide range of styles to create a unique blend of dark rock music for today’s disenchanted alternative fan. SPHERE managed to catch up with Rachel Mary Callaghan (vocals) and Gemma Fleet (bass/vocals) for a quick chat about their influences. 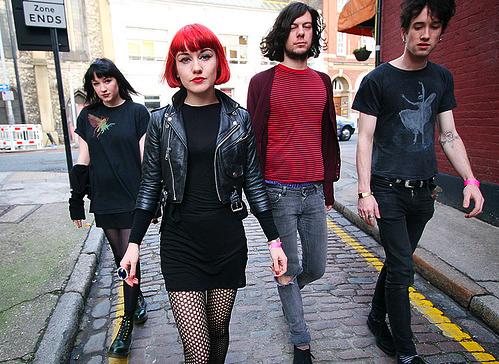 S] You guys don’t really hold anything back live – can you tell us about the most “cringe-worthy” moment you have had thus far?

Rachel] We don’t really cringe about stuff we do on stage, what’s the point? If we did cringe about every little thing on stage then we probably wouldn’t be making this type of music in the first place, we may as well be in a twee band.

Gemma] I only cringe at the photos afterwards, I have a personal wall of shame.

S] Can you please explain where you were when you wrote the song, and the inspiration behind ‘Ode To Millers’?

Rachel] It was actually our first ever song from our first ever band practice. I think we decided on the title because Miller’s Terrace was a place where we all used to hang out.

Gemma] There were a lot of mice there that liked guitar based music.

S] You have mentioned David Lynch before and it got us wondering if you could delete the soundtrack of any film (ever made) and place your music in there what would it be and why?

Rachel] Ghost Dad! Although I wouldn’t want to delete the soundtrack, just parts of it. In fact it would be awesome if we could collaborate with the big, muscley saxophone guy and play some sweaty numbers whilst jumping through hoops of fire live on stage and actually be seen in the film. That would be a dream come true, not the second one mind you (Lost Boys: The Tribe) that made a small part of me die inside.

S] You are influenced by a lot of American punk music – how did you find touring over there, would it be fair to say that people are more dedicated to the punk scene than here?

Rachel] We hadn’t been together for a great amount of time when we went over there but the crowds definitely seemed a lot more enthused. They would jeer us on and generally get quite ‘involved’. Of course audiences in England do get involved but unfortunately in most cases I find that (especially in London) people seem to hold back a little as they are either scared of what other people think or they just plain hate us!

Gemma] I’d like to go to the west coast sometime.

S] Do you believe in ghosts, argue for and against?

Rachel] I like ‘Most Haunted’, Derek Acorah is a babe.

Gemma] What happens to a person’s energy after death is a mystery. I think there are a lot of mediums and spiritualists who take advantage  of people and lord it up, but I also think that human intuition including in the subconscious mind is very powerful and can to some extent channel lost energies. I also really like that film Ghost Dad with Bill Cosby. It’s totally believeable.

S] Can you tell us about a couple of the best moments that you guys had whilst recording your debut at the legendary Abbey Road Studios?

Rachel] We never actually recorded it there, Rory recorded us in his studio and we got it mastered at Abbey Road. I think the best moments for me had to be the fact that the room which we were working in had numerous Kylie and Pulp cds mounted on the walls and the scary old dinner lady who looked like she wanted to kill me because I asked her for a fork.We might get her to join our band.

Gemma] (laughs) she is legendary!

S] How will you be expanding the KASMs concept this year – will there be DJ slots and band remixes, stuff of that nature?

Rachel] We have never really been into the whole band remixing thing, a few people have asked us if we would like them to do one for us but we just can’t imagine it sounding very good. As for dj’ing, we have done this a few times and really enjoyed it. Gemma and I DJ’d in Berlin earlier this year, it was amazing. Lots of young German boys asking us to play Arctic Monkeys and getting really upset when we played Nirvana and Dinosaur Jr instead, good times. We would definitely be up for doing some more DJ’ing, if one person dances its worth it.

Gemma] DJ’ing is fun, its kinda like doing a gig but you don’t have to carry loads or watch how much you drink. I am a master YouTube DJ.

S] KASMs are arranging a dinner party for three people, living or dead (if they are dead, they are alive for your evening) as much as you can tell us- who do you invite and what do you talk about?

Gemma] I’d invite Scott Walker, Rachel Mary Callaghan [KASMs] and Rory Atwell and talk about how to answer this question in a nonchalant yet witty manner.

S] What are you guys most looking forward to working together on this year once you have finished your upcoming tour?

Gemma] Some new stuff, its been ages. We need some quality time.

S] We are curious, you guys obviously have built up a lot of hype recently and we were wondering since you have been described as “damn near perfect”, what is your favourite (or in your opinion the most accurate) journalistic interpretation of KASMs?

‘Kasms are the soundtrack to your new favourite LA-teen-vampire-punk film. Everyone’s drinking Mad Dog at the beach and they’ve set the trash cans on fire, there are lots of neon zebra bikinis and the cops will show up in approximately 57 seconds.’

The band’s video for ‘Bone You’ is below: