O.Children are the new black…so it seems. This London-based four-piece has impressed fans up north recently with their dark and seductive distortion-fed noise and standout songwriting ability. We thought that it might be a a good time to catch up with the band’s towering frontman Tobi O’ Kandi for a short chat about musical inspiration, genre classification and some future plans. 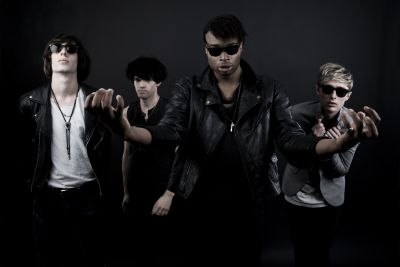 “We will always do our own thing”

S] Hi Tobi, what are you doing today?

T] I am currently headed to the laundrette because my washing machine is broken!

S] Shame! Right, you are frequently tagged as goth rock – how do you feel about the genre and the idea that you are supposed to be re-inventing it?

T] It’s a funny one really because we set out to make music and were inspired by the things that we had always listened to like Bauhaus, Killing Joke, The Jesus Lizard and others. We never really set out to sound like any of that though. When we came out and people started to label us as a goth band, we were like, ‘Really? That’s a weird way to look at it!’ Of course, everyone is entitled to their opinion and some people call us ‘gothic rock’ and some people describe us as ’90s noise’ or things like that. People can think what they like and we will always just do our own thing!

S] We are based in Yorkshire and with the origins of goth being up here – do you notice a different response between the crowds down south and in Yorkshire for example?

T] We are actually on tour right now and we have played Leeds, Birmingham and a few other places. It seems to us that people up north ‘get it’ more. That’s not to say that we are received worse in London, but there seems to be some arrogance around and people have lots of opinions about one thing or another there. When we play up north people seem to really enjoy it and get into it – it’s very refreshing and we always have a really good time.

S] What are your aims for the rest of this year and into the next?

T] I am looking forward to doing a bigger tour to be honest, because we are having so much fun on this tour and it’s just a little thing! So yeah, it will be good to go on and play some bigger places and we are going to be supporting some bands as well – I can’t say who yet, but we have some names in the pipeline! Then after that, we will be going on to make the next record.

S] Can you tell us about the debut self-titled album and what some of the strongest themes are?

T] It’s not so much about a concept as it is about things that are in my head. I never set out to write a concept album, and nothing was planned – there wasn’t much of anything to be honest! I got sick of writing songs before that were just stupid. If you can imagine it like a film-script and the soundtrack to that – the album is essentially an audio-film. You can experience the same feelings when you listen back to a soundtrack that you had when watching the film and we wanted to create all of these feelings that people identify with and relate to in a story and write them down. It came out the way that we wanted.

S] On a similar note, tell us about the inspiration for the track ‘Ruins’ – what kind of experiences contributed to the writing of that track?

T] It’s inspired by every day life and themes including lost love. It seems like all I ever talk about is drugs, girls and guns! With ‘Ruins‘ I wanted to take an experience that people can relate to like losing someone you love because they have become someone else’s and turn that into a story set in the desert with girls and guns rather than just writing a song about someone getting dumped!

S] It seems like you guys are constantly trying to make it as difficult as possible for people to tag you into any specific genre?

T] We’re not really trying to do anything like that. I guess that it might seem like we are trying to distance ourselves from the goth tag because we are really nothing like that. I mean, we love the music but in general we are very happy people who have bad days and good days – it just seems like I tend to write more about the bad days than the good ones.

S] How do you enjoy performing live in contrast to being confined to the studio?

T] Well, I haven’t really been on tour very much, so it’s great to be able to play all of these really cool places. It’s been really fun to be able to engage with people while on stage, so I would say that I prefer playing live for now, but we will see how the next record turns out.

S] How do you think the next album will sound?

T] I really don’t know how it’s going to sound but I can say that we will be making more of an effort to write everything together as a band rather than me just writing the songs and taking them into the studio for the band – we really want to make it more of a group effort. That way, the songs will have many different angles. I think it will be a better record and there will be quite a few differences. I am really looking forward to it.

S] What prompted such a large shift in direction between electronically-driven band Bono Must Die and your work for O.Children?

T] The thing with Bono Must Die was, that it was basically a joke. I put on this false cockney accent and tried to sing songs about night buses! After a while we got bored and we wanted to do things properly – I got better at writing songs and I am a lot happier now.

S] If you could remove the soundtrack from a film and replace it with O.Children’s sound – what film would you pick and why?

T] It would probably be ‘The Proposition‘ written and soundtracked rather obviously by Nick Cave. It’s a western about a gang of brothers. I think that the whole plot would fit pretty well if we found the right song for it.

S] What’s been the best moment on tour?

T] It’s all been great, but I think the best moment was in Leeds because there we had the biggest crowd and the audience just went crazy – that seems to be very rare these days. There was this fantastic atmosphere when we played and everyone really enjoyed it.

S] What’s the best thing about being a member of O.Children?

T] I think we just work together really well. It also seems like we get a lot of free stuff! It’s nice to play in a band where we share the same opinions and music. We work hard and play hard – we are a group of best friends. It’s not hard work being in this band!

S] Is there a track from your debut that defines the state of the band right now?

T] The secret track that the label wouldn’t let us put on the album but we managed to sneak it on anyway without them knowing! It’s called ‘Lily’s Man’ and I think that one defines us and what we are doing right now.