For our next Reverbnation spotlight, we chat to Rob “Bull-E” Edmonds of Brazen Providence. 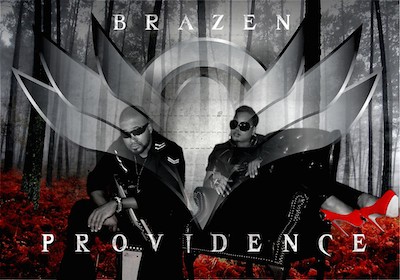 S] How have you guys changed and developed as artists since you started out with Brazen Providence?

R] “When we first started out we didn’t quite know what our sound should or would be. We knew it was going to be elements of hip-hop and rock merged, but we didn’t know exactly what that would translate into. After being in the studio for months, writing and recording hundreds of songs, we realised that there was a consistent element in the sound; an immutable theme. We discovered, very organically, that our songs spoke directly to and about the human condition; whether it be love, struggle, obstacle, loss and more. That is one of our strongest suits and it works because people generally gravitate toward music they can relate to on a non-superficial level. We’ve developed into better writers, performers and just a better band in general. We know what works for us and what doesn’t, what our music should sound like, what our videos should look like, what our image should be. We now know exactly what our music represents, who we are as artists, and we will not compromise the integrity of what we’ve established. We have full control and full creative license over everything we put out as a band and that is a phenomenal feeling to any artist.”

R] “Our career highlights to date are: ‘Punk’ being ranked in the CMJ top 10 hip-hop charts for 20 consecutive weeks.; reaching number one in the following states: Hawaii, New Mexico, Ohio, Colorado, and Minnesota. That was a huge victory for us because, as you know, it is exremely difficult to get your songs in rotation on college and commercial radio. Having the support and appreciation of our fans, is a significant testament that we’re doing something right and we’re on the right track.”

S] What sort of stuff are you guys inspired by outside of music – think films, games, locations or people…?

R] “The great thing about inspiration is it comes in many forms. For instance, just hearing a particular word and the context in which it is used, can spark and birth a full song. Smells and sometimes food may trigger a memory that inspires an idea for lyrics or the music. We’re often inspired by current events going on in the world as well. The video game ‘Metal Gear’ is one of the inspiration behind our next video ‘One Days Walk’. Mexico has been a huge inspiration for our writing. Being there facilitates the creative process in such a major way. I guess it is due to the spiritual connection and clarity we feel when we are there. We’re blessed to be able to be open to receive inspiration on any form or level, be it minute or grandiose; that way we always have something to talk about that is relatable to people.”

R] “’Punk” is the first song we’ve ever recorded together. Actually the song ‘Punk’ birthed the band Brazen Providence. Betty walked in the studio when I was putting the finishing touches on the track for ‘Punk’ and told him she wanted to write something for it. We recorded the song and the finished product was so dope and amazing; we immediately thought, wow this is the beginning of something really special. The rest is history.”

S] What are your plans for the rest of this year – you seem to have been quiet recently?

R] “We are in the studio right now working on our second album and music for other artists we’re working with. So we’ve been really immersed in that world. We’re coming up with amazingly creative stuff and we’re really excited how the album is turning out. We’ve also been putting our hearts and souls in our next music video. It’s our biggest production to date and we’ve been working on it for a couple of months now. The release time will be the early part of June. We’re extremely excited about the video as it’s a very unique and different route than our usual videos. We hope the fans will appreciate it.”

R] “Absolutely! We love Adele, Amy Winehouse, Coldplay and Emeli Sande, the list goes on and on. The UK has a plethora of extremely talented artists for sure.”

R] “We plan to do a mini tour in Europe for the next album. We didn’t get a chance to tour overseas for the first album, but we will be in the UK for the next tour. You can count on that!”