In our next Reverbnation Spotlight, we chat to David Heida, Lead Guitarist of Haster about music and inspirations. 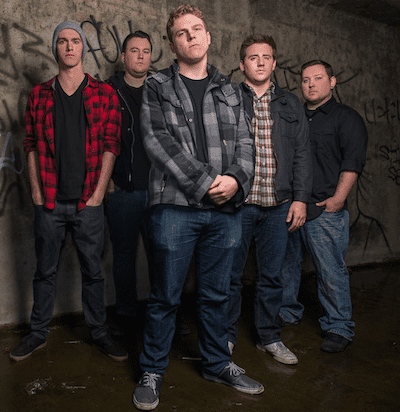 S] How are you? What’re you up to right now?

D] “I’m good, I just got home from seeing Godzilla with my wife.”

S] How have you changed and developed as artist since you started out, considering your many experiences?

D] “The trust in yourself. I feel way more comfortable and confident in my own skin nowadays. I feel like we’ve really developed Haster into something we feel very confident and prideful about. We do what comes very natural to us. We don’t try be ‘fake’ to anyone. We believe in our music, our art and image, it’s who we are. It could be from those first couple of years of playing dive bars in front of 3 people every night to where we now have created a name for ourselves in our local scene.”

D] “I’ve had a couple. It’s more like the goals we’ve set out and getting to those. The first time playing the House of Blues in Anaheim. That was the first thing I had always wanted to do as a musician and now we’ve played it seven times and we just booked another show there. Earlier this year when we opened for Unwritten Law at The Observatory in Santa Ana, CA. It’s probably the biggest crowd we have ever played in front of up to that point and it was before ‘Let It Go’ had come out and just seeing so many people’s reaction to music they hadn’t heard yet was amazing.

And then, headlining our CD Release show for ‘Let It Go’ at the House of Blues Anaheim. That was a major goal for myself. It showed us all that all the hours and days we put into the music on this album was all worth it and to see the House Of Blues packed for us was an amazing feeling.”

S] What sort of stuff are you inspired by outside of music – think films, games, locations or…?

D] “Life is a big one for us. Music is an escape for us from the normal 9-5 jobs we all have to do still. At this point in our careers, we all have to work jobs to support our music and just having that there inspires us to keep going. But all parts of Art, Movies, TV Shows and other bands/artists inspire us to push forward and believe in what we do. You can second guess yourself all day long. Just believe in what you do and it’ll show to everyone else.”


S] How do you look back on the success you’ve achieved at this point in your career?

D] “We’ve won some local independent awards and this year we were nominated for Best Metal Band in the Orange County Music Awards – we lost to Avenged Sevenfold. But to me, that’s just popularity contests. Success to me right now is having fans listen to our music and that daily interaction we give back to our fans on Twitter and Facebook is what drives me. I love hearing about something finding ‘Searching’ for the first time know that EP came out 3 plus years ago. But if we could just create music and play shows and make as much money as we do doing our 9-5 jobs right now, that would be success to me. Everything from there is gravy. It’s so hard to make it in this business and not get burnt out or jaded, that if you can get to a point where this isn’t a hobby anymore but your career, never take for granted because this was your goal from day one.”

D] “Tour. Tour. Tour. Tour. It’s really that simple. We’ve lined up a West Coast tour in June/July and want to get to Texas in August and just play as far out as we can without going broke right now. We just want to meet all the fans who’ve known about us for almost 4 years now and play to them. It’s hard to tour and make money at it but we are trying.”

S] Are you influenced by any UK artists?

D] “Led Zeppelin is a band that Brian Tew [drums] and I bonded on early on in creating Haster but right now Arctic Monkeys are a band we love. Can’t wait to see them live in here LA soon.”

S] What’s the process like for you when you build tracks, take for example ‘Medicine’ and ‘Crutch’?

D] “It all starts with the music. All our songs start with a riff we’ll jam out in our studio and song just get built up from there. Lyrics are always last but you need the music there to be the foundation what everything is going to happen in that song. And we’ve written songs that take a day, our songs like ‘River’ that take three months. It just happens. We want to find that area in the song that works best and only playing them over and over again to do find that.”