For our first Reverbnation Spotlight of 2014, we chat to Shinobi Ninja’s Axis Powers and Maniak Mike about music and influences. 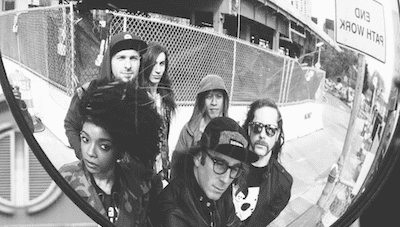 S] How have you guys changed and developed as artists since you started out with Shinobi Ninja?

A] “We have all improved our abilities. Trying to make it in New York has forced everyone to bring out their best. People from all around the world come to New York to try and make it. You’re not competing just with New Yorkers but some of the best in the world.”

M] “10,000-plus hours of doing all things Shinobi Ninja has made me a better everything – guitarist, songwriter, producer, engineer, wheelman, businessman, booker and human.”

A] “Playing big Music Festivals like Summerfest and Catalpa. It’s always exciting to play in front of a big crowd.”

S] What sort of stuff are you guys inspired by outside of music – think films, games, locations or…?

A] I think we have been definitely inspired by California. We’ve had the fortune to play a lot in Cali. From sold out shows at the Roxy to touring Highschools we’ve had a lot of great experiences in that state and have a lot of good friends there.”

S] How do you look back on the success of ‘Rock Hood’ at this point in your career?

A] “It was a lot of fun to put that record out and tour the country.”

M] “The success of ‘Rock Hood’ was awesome, and still is awesome, but we’re looking on to the future, to the bigger and the better.”

A] We want to release a lot of new music and bring it to our fans.

M] “We’re about to embark on a national tour in support of our new album, ‘Escape From New York’, out on June 3. Maybe a European tour afterwards. We’re definitely gonna release more ill music, including collaborations with legends, straight legends yo.”

A] “I’ve always liked Amy Winehouse and Adele. And who doesn’t like The Beatles?”

M] “UK acts are definitely part of our sphere. So many to name, but I’ll leave it with Zeppelin, the Jimi Hendrix Experience, Black Sabbath, and Cream. There’s really so much more though. God save the Queen!”

M] “A UK tour would be amazing, and it just might happen before the year is done.”