In our most recent spotlight, we have a chat with A Joker’s Rage vocalist Zakk Taylor, who tells us a little about his recently formed band’s potential, musical influences, and personal development. 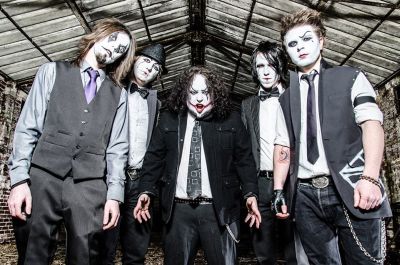 S] How did A Joker’s Rage come to form, originally?

ZT] “After I left my first band, Kid Ego, I decided to take some time away from music. I knew if I jumped straight into another project it would just end up being a Kid Ego replica in some shape or form. I forced myself to take the Motley Crue albums off repeat and open my ears to everything and anything musical that inspired me. After about a year I moved to Dubai for a few months on my own and took some time away from everything to deal with a few personal demons. I found being surrounded in a different culture alone, fending for myself, was a great way to gain some perspective on all manner of things. Soon enough, I put pen to paper and started hearing drum patterns and riffs in my head. With enough ideas I eventually returned home and called the best session musicians I knew to start laying down some ideas. At that time there was no clear intention of what the project would be or how far I would take it. The important thing was that I was enjoying creating music again. After a year of experimenting with different sounds and playing with some amazingly talented musicians, it was time to seek a local solid line-up. It’s simple from then on, I saw Adam play a gig and his guitar skills blew me away, had to have him, the same goes for Matt on the drums and when it came to finding the right rhythm section I already knew that Phil and I have a great creative chemistry. Phil is a needle in a haystack. He focuses so hard on his role as a rhythm player, whilst being extremely creative, but never competes for solos or tries to be a front-man which is something I’ve always admired about him. Geordie is like my best friend. We live together and he is a really solid bass player, his consistency on bass I find far more important than being flashy. So earlier this year we all came together and it’s been nothing short of amazing ever since. The best thing about all the guys was that they weren’t put off my ‘genre spanning’ ideas, and were not afraid do try things differently. I’ve never been happier in a band!”

S] What kinds of bands have influenced your style over the years?

ZT] “As a kid I was obsessed with Michael Jackson, to this day he is still the biggest influence in every creative process I go through. I think that’s where the drama and theatrical style comes from, Michael Jackson and Tim Burton films. As I grew up I became a house DJ; I’ve still got my Technics 1210s and a couple of grand’s worth of vinyl. Then it was all about the hip-hop! My name Zakk originates from an old nickname ‘Pac’! I used to wear a bandana back to front. But when it came to experimenting with rock, my old pal and bass player said ‘Pac doesn’t sound rock n roll’, so he changed it to Zakk. I protested but it caught on!

I very rarely sit and listen to hard rock and metal; I find there are so many bands just trying to replicate one particular style. I gain more inspiration from people like Ray Charles, Kate Bush and Simon and Garfunkel. A lot of music has lost the art of story-telling! I’d be lying if I said certain modern rock bands haven’t rubbed off on me a little, even local bands. There’s a lot of talent about, but twice as much sh*te!”

S] How did you find your time working with Kid Ego, looking back now?

ZT] “It was one big party if I’m honest. We were all young and just wanted to revive the 80’s LA rock scene. It just so happens we were pretty good at it so we were fortunate enough to get some great opportunities. However, I think I knew back then that we weren’t really pushing any boundaries. Towards the end I wanted to step outside the rule book of sleaze rock creatively, but the feeling wasn’t mutual with the band, so we’d taken it as far as we could. Great times though!”

S] Has your work with Kid Ego had an impact on the way that A Joker’s Rage writes music?

ZT] “I don’t think I would be capable of doing what I do now without the Kid Ego days. If Kid Ego were my high school years, so to speak, AJR would be my college years, and with AJR I feel we’re only scratching the surface. I can see so much potential for the future. I think it’s easy to hear some Kid Ego influence on the occasional AJR track, the difference is Kid Ego were one style, one ‘scene’. AJR can write a reggae track, a country track, and a trash metal track, and get away with being the same band.”

S] Being a York-based band, does the York audience give you the craziest atmosphere and are there any other audiences that have stood out as memorable to you?

ZT] “We’ve only really played two shows as an official line-up, but I love our local crowd: we couldn’t go any further without them! It’s more like a huge family rather than a band and their fans. Having been lucky enough to tour the States and certain parts of Europe in the past, I would have to say the craziest crowd has to be Copenhagen. They lose their inhibitions and react like the first 50 rows of dedicated fans at a Slipknot concert would! The girls really do lose their inhibitions; you know what I mean! In the States, the further south you go, the crazier it gets. Simples!”

S] What was the original inspiration behind the band name, and of course, the outfits?

ZT] “During my phase of ‘self-discovery’ out in Dubai, ‘The Dark Knight’ had just been released. I have always been a huge Batman fan; the comics, the old TV show, and the Tim Burton movies. The whole fantasy of it appeals to me. I wanted to create something that was an escape from routine and normality. I wanted to switch to an alter ego. Truth is, I don’t want to be crazy, wild partying, rock ‘n’ roll, 24 hours a day. I want the opportunity to be someone different when I need to be. You could say we all have split personalities in this band. The ones you see on stage should be approached with caution! As for me, right now I’m a normal dude, listening to a bit of Rod Stewart, deciding where to do my shopping tonight. God forbid my AJR personality takes over me. Rehab and a padded cell please!”

S] You’ve got a killer mix of bands in your DNA with the aforementioned Kid Ego, and also Testtone3 – how do you find working with the rest of the band?

ZT] “You just know in your gut when the formula is right. In Adam, I found a mind-blowing guitarist that is able to translate my annoying out-of-key humming into real riffs! He seems to know what’s in my head even if I’m having trouble explaining it. Phil and I wrote the majority of Kid Ego material, so it’s a proven method. The difference is we’ve both grown musically and are far more open to a good bit of madness! We call Matt ‘the wizard’: After I write the general skeleton of a song with a few melodies, riffs, and a theme, Adam then takes what’s it my head and makes it an actual piece of music. Phil and Geordie will always twist it a couple of ways to make it more interesting, then Matt just sh*ts out a Danny Elfman style 72-piece orchestra over a middle eight like it’s no big deal. The boy is a monster. It’s a lot of fun!”

S] How was it working with Will Jackson (produced work for the Pigeon Detectives, Kaiser Chiefs, and The Music) on your first self-titled album?

ZT] “At the time I called it an album simply because it had 10 or 11 tracks, but I don’t regard it as being an AJR official release, for me it’s a collection of ideas and experimentation. That album was my personal demo of writing songs outside of my comfort zone. ‘The Masquerade’ is the official debut release as far as I’m concerned. As for Will Jackson, he taught me some amazing values. It was actually Will himself who told me to step away from my comfort zone and go crazy. I owe him a lot. He’s like ‘Gandalf’ of music. I felt I couldn’t work with Will on this EP because it would be too easy to rely on him for creativeness. I had to fly this plane on my own without my teacher, so to speak, but I look forward to revisiting our musical relationship with the right project!”

S] What were the inspirations behind the new EP ‘The Masquerade’?

ZT] “Personally it’s all about self-worth and over-coming all of the sh*t we go through every-day. The world can be a depressing place at times: you only need to switch on the news to see innocent people dying, starving, losing their jobs, heroes turning out to be dirty sc*m-bag paedophiles, and more. This EP has a few numbers about overcoming adversity, a couple of fictional story-telling for amusement, but overall I just want to entertain; to try and give people that ‘escape’ that we have when we wear that make up and become A Joker’s Rage. If any song strikes some form of emotion with somebody, be it just an old man’s smile or a big sweaty girl’s first orgasm, then I’m a happy man!”