Acoda‘s music blends heavy-as-hell metal instrumentation with passionate hardcore delivery to achieve resounding results that work on all the senses and appeal to fans across the great genre divide. As they prepare for a tour which sees them stop at a variety of cities across the north, we chat to the band about their inspirations and sound. 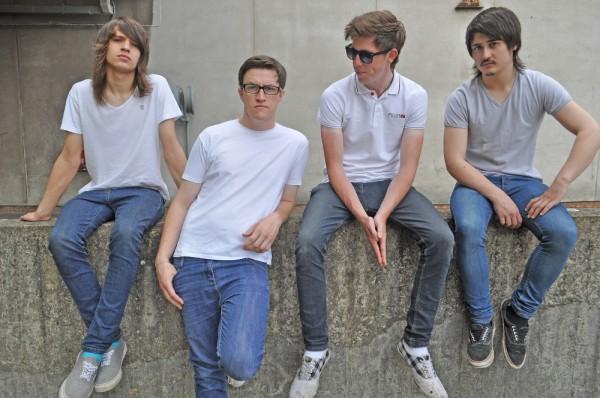 S] ‘I Creep’ really stands out for us, can you explain the inspirations for this track?

Stephen] Thanks! Lyrically, I guess the song is about corruption and it’s various forms. It’s about the way people can be so easily corrupted in this world, as well as being so eager to corrupt others, sometimes without even realising it. People can be sneaky. It makes it hard for you to trust other people as well as trust yourself, and once you’ve tasted that darker side, whether you like it or not, it becomes part of who you are.  It’s a pretty heavy concept, so we tried to reflect that with the music as well.  We all love the song and it’s had a really good reaction so far at the shows.

S] What do you enjoy about performing live in comparison to being confined to the studio space?

Damon] I think that when we play live, the power and energy of the songs becomes more apparent, and there’s nothing better than a good crowd reaction!

Jake] Spontaneity. Live you play as a unit as opposed to one at a time in the studio.  All four of us connect on stage, and it’s reflected in the performance.

Stephen] I’m not a massive fan of being in the studio. Nothing comes close to performing live for me personally. Studio time is almost just a means to an end.

S] You are playing a lot of towns that don’t get much exposure to new alternative music like Hull, Grimsby and Scunthorpe – what are you looking forward to about playing these types of dates?

Damon] What I like about playing smaller areas is that there’s always an air of enthusiasm, because there aren’t as many shows coming through, everyone is more keen to hear new music and rock out with the bands, which is always cool.

Stephen] You find that a lot of these shows are done on a very DIY level, which is something that we’re always happy to be involved in.

S] What keeps you inspired to keep creating music?

Damon] The prospect of creating something that inspires people, is what drives me to write music.

Stephen] Music is just my favourite form of expression. It’s almost like I don’t have a choice, I’ve just always been inclined to do it! I’m a pretty thoughtful person and writing lyrics is just a way of gathering my thoughts, ideas and stories together. It certainly ain’t the money!

Jake] Playing guitar, not songs, just playing it. Finding an odd time signature, or just one riff and going with it, sometimes it can shape the entire song from one tiny idea. It’s a real inspiration.

S] How will the concept of Acoda be expanding towards the end of this year and into next in terms of new material?

Damon] We’ve been writing towards our début album for a while now and are hoping to put it out sometime in 2011.

Stephen] Every song is an experiment for us. We’re just trying to write a début that’s as integral and original as possible.

Shaun] We’ve got between 13-to-16 demos at the minute and we can’t wait for people to hear it! We’re going to be playing some unheard album tracks on our September and October dates as well. We’re all just really excited to get our new material out of our bedrooms and into peoples ears!

S] What do you hope to achieve with the release of the ‘Finding Your Feet’ single?

Stephen] We wrote the song over a year ago and we’ve been playing it live for a long time as well. I guess we’re just trying to raise our exposure a wee bit prior to the release of our début full length.  I’m far more interested in people hearing a whole bunch of new songs than just the one.  ‘FYF‘ is a good first taste of Acoda, but it’s just the tip of the iceberg..

S] What has been your defining moment thus far, given that you have toured Europe and the UK extensively?

Stephen] Going out to Europe was definitely up there!  The defining moment though? That’d be when our drummer quit in late May this year.  We had to really look at what we were doing and re-evaluate everything. There was no way that we were going to stop, and there was no one we felt would be able to join, as we’re such a tight group of friends. In the end, Jake moved from guitar onto drums and Damon took over on guitar as well as his vocal duties. Those few months of uncertainty and adjustment to becoming a four-piece have made us stronger than ever and it’s definitely our defining moment so far.

S] How has your attitude to creating music with the DIY approach changed since you started out?

Damon] We’re still very much doing the whole bedroom recording thing for all of our demos, so not much has changed there. Obviously you get newer programmes coming out to help with this process and we’ve kept ourselves pretty up to date with all of that sort of thing.

Stephen] The single is the only thing that we haven’t done ourselves. We recorded it at Premier Studios in our hometown, Corby, with a good friend of ours Justin Von Gleich. We’re really happy with how it turned out. But yeah, we prefer the DIY approach because of the cost.

Shaun] Which is nothing!