Alter Der Ruine are probably one of the weirdest bands you will hear all year, and if you’ve heard them before, you already you know what we’re talking about. The States-based three-piece create an insane amalgamation of Industrial-punk-drum n’ bass-electro music (or just power-noise) that’s built for packed club dancefloors and huge live arenas. We have a quick chat with the band about plans for the future and other random-yet-very important things. 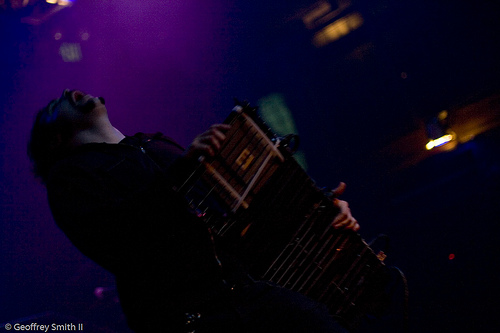 S] You have referred to your most recent album as a “transvestite” of sorts that “runs this way and that” – is this “transvestite” sound something that Alter Der Ruine will copyright and always be proud of?

ADR] Did we really call ‘Giants From Far Away’ a transvestite? Anyhow our albums never sound the same because of personnel, gear and tastes in music. There’s never been a desire to repeat an album, we’re pretty content to just explore our abilities, even if it means stepping in strange directions.

We’re proud of the ‘transvestite’ album but aren’t looking to repeat it. We have some new areas to explore coming up and some of the ideas are very different. As far as copyrighting the sound, I’m sure if we tried we’d get sued by other artists who claim to be the first of their kind. If we’re trailblazing we aren’t claiming to be.

S] You have some great links in Europe, how plausible will a tour be in the near future and what are you most looking forward to?

ADR] Now that we have a European label things seem a lot more realistic as far as getting over there. ProNoize taking us on (they said we could announce it) helps out a lot. We’ve made a bit of a dent in Europe but nothing to brag about and their help is going to be much appreciated in the future. We’re just looking forward to playing overseas and to crowds who aren’t familiar with what we bring to the table. 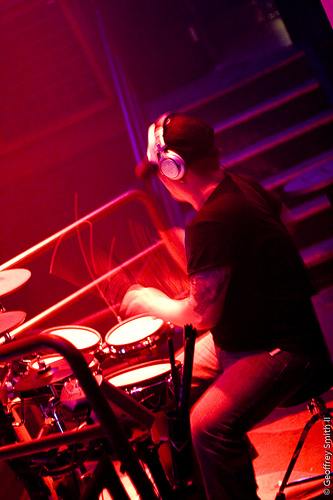 You have begun writing new stuff,the last album was almost a “dark party” album and the new work continues in a similar vein but with more vocals this time, what prompted this decision?

ADR] The next go around with be very diverse. So much so, that we plan on putting out two albums at the same time. One of them will definitely appease the club fans, the other will be totally different in style and sound. The latter album will probably shock a few due to the drastic changes employed on it.

The reason for the style changes on the second disc is because we really want to branch out and show people what we’re capable of. The three of us all play instruments outside of programming and have been wanting to incorporate different elements for a long while now. We draw inspiration from a lot of different music and have way more to offer than what we’ve let on about and this second disc serves as the doorway to a whole other range for us.

As for the vocals we just wanted to have something more for people to connect with. A voice makes things more personal and relatable to the listener. That and we have more to say than ‘I’m a loser’ and ‘Vaginas’. The humour on the last album was a response to overly serious themes and generic samples that seem to hang in this scene. We got a lot of praise and crap for that attitude. Obviously we can’t please everyone and we’ll just continue with our evolution.

S] How are the band progressing in terms of your inspirations, is there going to be a particular theme running across new material?

ADR] To name a few Jacob is influenced by Crystal Method, Prodigy, Opeth and DeadMau5 at the moment. Mike J is into DJ Dan, Jean Elan, Kill Hannah and Rise Against. And Mike T is into Alec Empire, The Vandals, The Faint and Mellowdrone. Obviously we’re all over the place. As for themes we’ll see how things come together. At the moment the lyrics deal with a lot of different ideas and play out more like short stories more than anything else.

You guys have some fantastic ideas, are you working toward expanding Alter Der Ruine visually through another music video and also on stage.

ADR] Videos will happen, we have more ideas than we can realistically make. We have been throwing together backing videos for the last few tours that have been pretty random and confusing. If you’re a fan of obscure and shitty late 80s / early 90s action movies all we’ll say is you’ll be very happy with our projections.

On stage we’ve rebuilt our live rigs to the point where Jacob and Mike T are completely wireless. The live sets play out almost like a punk rock show and have a lot of energy and movement. We’re really aiming to put on a good show and so far the feedback has been extremely positive. 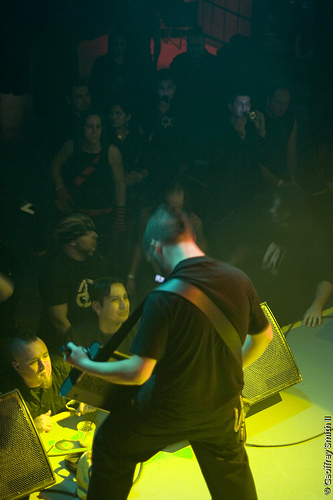 If you could erase a film soundtrack and replace it with your sound, what would it be and why?

Movie: ‘Wall-E’.
Why: It’s adorable and it made me cry, twice. Much like writing our last album.

Movie: ‘Body Rock’ or ‘Heavyweights’.
Why. Because they are time-capsuled montages of the sweetest shit ever.

S] What do you most enjoy about taking your sound out on the road, we bet that you attract some very interesting people?

ADR] Car rides are the best! It’s nice to get away from home for a while and go to places we probably wouldn’t go. Also, meeting new people, eating local cuisine is great. That, and making new fans, crowds are starting to come around and get on board with our whole performance and to have more people every go around is a very cool feeling.

S] You each sit a person down to listen to the last album ‘Giants…’ and have dinner with you, they can be dead or alive, friends, celebrities or pets, who would you choose and why?

Mike T] My dog Max, because then he would be alive again. Then I would feed him because he’d be hungry, the music wouldn’t matter, he could always tolerate noise. Other than that I’d say my parents because as far as I know they’ve only heard one song of ours the entire way through. It’d be funny to see them act nice about not digging it at all. As for that meal we would have Cheeseburger Helper. Because meatloaf takes too long.

Mike J] My Grandmother because she never got to hear it and she’d say she liked it even though she didn’t. We would have her homemade stew because I haven’t had that since she passed.

What are your biggest plans for the rest of this year?

ADR] Hit the road with Nachtmahr in July. Get back home and finish writing two albums. Most likely tour again later in 2009 then settle down and do nothing because we’re burnt out.

Check out the video for ‘Relax and Ride it below:

Check out the band’s tour promo video below: