Arcane Roots play an innovative mix of alternative and progressive rock while their sound darts between intense, passionate sounds and emotive alternative rock goodness. We catch up with the band (Andrew Groves, Adam Burton and Daryl Atkins) at Sonisphere 2011 to talk about their music and plans for the future. 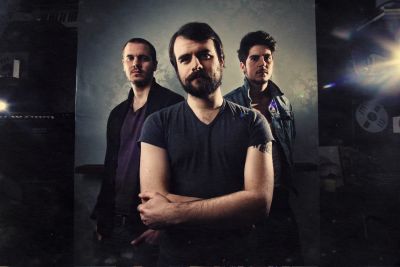 Andrew] “Amazing. We’ve had the best weekend. We had a nice day of press and meeting people. We got to meet The Mars Volta and see Biffy Clyro and stuff – we saw a lot of boobs too! The whole experience has been incredible for us.”

Daryl] “Yeah, we just came off the stage. It went really well. We played really well. It has been one of the times where we played the first song and we knew the gig was gonna be awesome.”

Andrew] “We weren’t sure about how many people were going to come in at first. We walked on and it was crazy, people just cheering us on and singing along. We had Corey Taylor [Slipknot] checking us out and Mastadon have just put in an order for our t-shirts. These are some of the most surreal things we’ve heard of.”

S] If you could come up with a recipe with all your musical influences, what would the recipe be for Arcane Roots?

Andrew] “Then we’d mix in some Tool and some Reuben.”

Daryl] “Sprinkle in some Adelaide for drums and guitars.”

Andrew] “Uh, a dash of Camille and Anna Duke and some French bands.”

Daryl] “Add in some mars bar on top.”

Andrew] “A bit of mars bar as well. The obvious parsley for the Italian-style evening meal-type thing. Also, serve it up in a nice Tessaract bowl. Maybe some sort of Meshuggah flavouring.”

S] So, what about your attitude to live performance and the quality of fetivals like this?

Andrew] “I find it to be a massive step up, I think. It’s like the difference between going to a cinema to watch a film and seeing the same film in a theatre. I think everything needs to be a lot ‘bigger’. With festivals, they’re sort of like shopping markets for bands, people just kind of drift through or whatever, so I think you have to be hitting hard. We probably hit it a lot harder and a lot more synched for the festival thing, whereas for the normal live show, we try and make an experience, rather than a big bang.”

S] Is there a song at the moment that you feel states or defines you guys as a band?

Andrew] “Well, yeah, we basically did like a B-side, well, I think it’s an A-side now, it was a small linking track that we did on the album, about 40 seconds long. But we liked the song so much that we thought, ‘we’ll make something cool to make it feel like we are headed towards a new album’. It was a chance for us to sort of flex some muscle again and write something new, and so we extended it. It’s called ‘Divinity’ – we’re really proud of it. We’re happy with it and we had a great response for it.”

S] What about your aim as a band? Has that changed at all or is it pretty much the same as you started out?

Andrew] “I think the reason we started the band is because we felt no-one was doing anything interesting. We’re all keen on a challenge. I’d hate to be in a band where we did it ‘by the books’. It’s something excited and fresh that keeps us passionate as musicians and it’s also powerful and it kind of expands to our audience.”

S] We’re based in North Yorkshire and obviously you guys are used to doing shows down South, how do you feel about doing shows in places like Leeds and Manchester?

Daryl] “We love it. We did a little short stint where we did about three dates up North and the best show was in Leeds. It was really good. We come from a place that has a strong music scene and we really believe in working with bands from any music scene. But we know how strong Leeds and Manchester’s scenes are.”

S] Last question then. Obviously you’ll guys will be playing many big festivals that are coming up, what are Arcane Roots’ festival tips and survival guide to festivals?

Daryl] “I can answer Andrew’s for him. It’s gonna be fruit cereal and milk.”

Andrew] “My idea is get yourself a bowl and bring that along and wash that out with some water. Get yourself a spoon, sugar and then get yourself some cereal to start the day with.”