York-based Audio-FX are unquestionably one of the most exciting new Industrial bands in the UK right now. The five-piece mix infectious EBM with pulsating rhythms and heavy-as-hell beats for a deliciously dark and addictive result. Having just released their debut ‘Audio Injection’ on Celldweller’s FiXT label we thought that now would be a great time to grab the founding members Nyx and Hondo to talk about their music and the future. 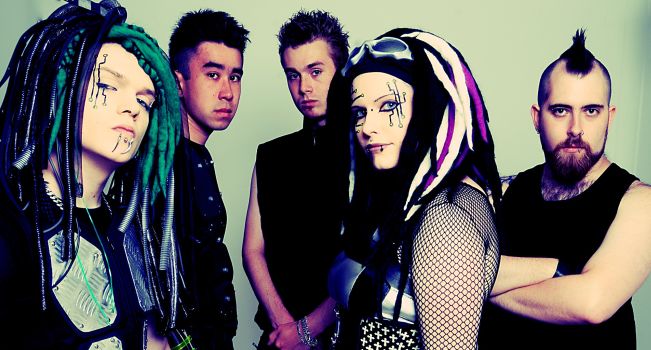 “This album creates a voice for the underground”


S] Can you tell us about some of the ideas behind your record ‘Audio Injection’?

H] The ‘Audio Injection’ album is a representation from the underground to the general society. Putting it politely, it is written so that our people who have been rejected by the general public and the government have a chance to express themselves through our music. The album also creates a voice for the underground and it says, simply – ‘We are here and we are not going anywhere.’

S] You have recently been signed to Celldweller’s FiXT label – how are they helping you to promote your new record?

H] Our distribution deal with FiXT Music has been a serious achievement not only for me and Nyx but for all of the band. Once I first heard about Klayton of Celldweller, his music and the FiXT Label I wanted to be a part of it. I researched into FiXT and how they work, who carries the company, the main assets, the artists they distribute and more. I did so for a long time and produced various different genres of music mixing metal and rock with drum and bass, hard house, breakbeat and more but it didn’t have that spark (I really needed  a spark) fate brought me to Nyx who opened my eyes to more and more underground influences and in-turn gave me that essential ingredient. She became co-producer and we formed A-FX.

FiXT Music have been great with us so far (a big thank you to James Rhodes). I mean, within one day of sending over the mastered tracks and the artwork our album was available to purchase through the store and we’re now also listed as a featured artist. They have also included spotlight features, promotional banners, and newsletter blasts – it’s really been the works. As a very well respected label, they look after their clients and we appreciate all of the work they’ve done for us as a new band on the roster.

S] If you could each sit down and listen to the new album with one person over dinner who would it be and why?

H] And it could be anyone?  If it could be anyone it would have to be Klayton from Celldweller for the pure and simple reason that we admire him as a musician and as such, his opinion on the album would mean a great deal to A-FX.

S] You guys have a very strong image – how will you be exploring and developing that on stage (and perhaps on screen) over the coming months?

N] The majority of A-FX have a great deal of stage experience; I myself have performing arts background. Hondo, Stixx 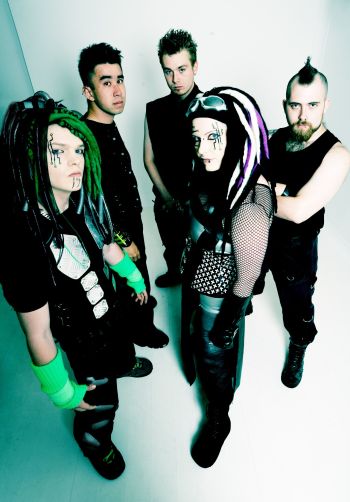 and Danny Carnage have been in and out of bands since before they could walk, so have developed a great deal of presence themselves and I can only imagine that this experience shared between the four of us will produce an electrifying live performance and on-screen presence. Psy, our electronic percussionist has a small amount of stage experience but from what we have seen from him, we can only expect great things with the amount of energy he puts into everything he does.

S] What inspired you when writing your tracks ‘UK Underground’ and ‘Razor Blade Romance’ respectively?

N] With ‘UK Underground’ – initially this track was written to show our musical diversity. Though, as we began writing it, our inspiration came from the UK’s underground scene. We felt inspired by the many people whom we have met from all over the UK in clubs and we thought that all these fantastic people should have a voice. For the track ‘Razor Blade Romance’ – when we began writing, Hondo and I were going through a very rough time collectively and so we drew upon those experiences and used every inch of them in ‘Razor Blade Romance‘. This track is essentially an Industrial love song demonstrating the strength and unity between two people through good times and bad. This track has so many different meanings on so many different levels and so anybody can find something to relate to on this song.

Really, each song on the ‘Audio Injection’ album has a different inspiration. For all of the tracks we have used our personal trials and struggles alongside those of people that we know and poured them into the music.

S] Can you tell us about your biggest plans over the coming months and what you hope to achieve?

N] Hondo and I are visiting Orlando in Florida for a break after writing the album not only that but we shall also be using the time as an opportunity to promote it. Once we return, we will be getting straight to work on the next two albums, one of which is purely Industrial and is half-finished and the other will be about people’s inner demons and their struggles to cope with them. It also goes into more detail about the pain these demons can cause said people and also the effect it may have on those around them. In the long term though, our main aspirations and goals are to do a UK tour and to be a well-known and respected band.

S] How has the concept of Audio-FX developed over the last eight years along with the people behind it?

H] Audio-FX itself, believe it or not has only been in the making for five months but the concept of the band and music has been a personal development over the last eight years searching for the right sound. I’ve had my hands in just about every different genre you can think of and I’ve mixed them together but Nyx give me that final push in the right direction. What we generated together is unique and as each track was completed it got more and more exciting, our ideas collide in such a way that it creates an amazing noise.

N] As for the rest of A-FX…Danny Carnage is a vital part of the band due to his skills in mastering and his abilities as a synth and keyboard player not only that, but he has a fantastic stage presence. Similarly, Psy brings a great deal of positive energy to the band. You only have to watch him rave at a club to figure that out. His surreal ability to adapt musically is amazing and he’s made the leap from playing an acoustic classical instrument in an orchestra to playing electronic percussion in an Industrial and EBM band. Finally, looking at Stixx – he has been in various different bands with Hondo so it has been a natural step for him to become part of A-FX. Simply put, he is one of the most extreme Industrial metal drummers we have ever seen.

S] How if at all, does the city of York inspire the band?

H] It hasn’t been York just on its own necessarily that has inspired us, it’s more the UK and the damaged society that we live in. Every single day is a struggle to survive and all we can do is watch life pass us by as we are sat in an office working for next to nothing. All I can say is that for us, the one good thing that’s come from the UK, is that it’s given us a lot more to write about. There’s a message we need to convey that the underground must stay strong and we can’t let them win.  We will give them a war that they will never forget.

For more information visit the official MySpace. You can check out our review of the new album here.