Believe In F.A.T.E are York’s current alternative music champions. Having reached the final of the Live & Unsigned competition for this year, they have punched their ticket to perform on the grand stage at London’s o2 Academy venue on July 23. The band, made up of Danny Porter and Joel Hewitt on guitars and vocals, drummer Ashley Harrison and bassist John Heaver, are enthusiastic and so is the city of York it would appear; the group can now count York’s Lord Mayor (Coun David Horton), Lord Mayoress (Jane Horton) and Sheriff (Coun Richard Watson) as fans who believe in their efforts. The city’s most esteemed representatives join us for an interview with the act before they perform at a local music showcase inside The Basement Bar, City Screen. 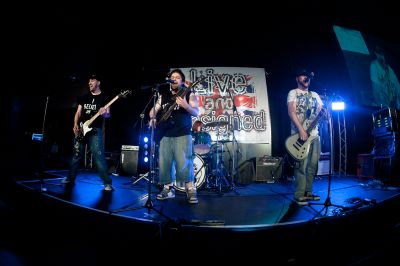 One might have thought that it would’ve been difficult to lock down the Lord Mayor and have him attend a (potentially) sweaty rock gig, however F.A.T.E band manager Gemma Holloway assures that he has been “very accessible and enthusiastic throughout the process of organising the event, as it clearly supports York’s creative people and their endeavours”.

Despite heavy rock music not being his genre of choice (instead preferring more “original” work from the 50s, 60s and 70s including Queen, Buddy Holly and Status Quo), Coun David Horton explains that he is very keen to see the band succeed in the future, and win the national competition held in London: “This is the first instance of an [unsigned] York-based band appearing at the o2 and we are all too happy to support them.”

Clearly, as the F.A.T.E members sit with such company in one of York’s busiest cultural hotspots, they are very grateful for the city-wide support, and it has come after they have spent months pushing their sound through social media outlets like Twitter and Facebook alongside producing their own official merchandise which now includes customised hats, t-shirts and trainers sporting the slogan “we believe”. Bassist John claims that self-promotion is key for any act trying to make it in the ever-competitive music industry, and that it has been central to all of Believe In F.A.T.E’s success. “If we were not hard working, then we are not going to get anywhere,” he says. “Nobody is going to take us to the top, so we have to do it ourselves.”

The band themselves are proud of their York roots and while collectively, they acknowledge that the music scene around the area isn’t nationally renowned, it is growing. “There have been some bigger bands from the city in the past, but they are quick to leave,” commented guitarist Joel. “It’s very important for us to do everything from home – we practice locally, and we’ve used a local film crew to do our video.” John moves on to describe how York has very much become a part of the act’s identity: “We are all from outside of this city originally, but it is where we met and why we are here now, so it is an essential part of what we are about.

“We have always wanted to be a band that progresses and develops, but remains respectful to where we are from at the same time, and we hope to bring all of the locals that have helped us out along for the ride!”

Having been together for around one year at the time of writing, it is obvious that the band’s passion and drive will continue on, because they love creating together. John says: “We always said to one-another that if this experience wasn’t fun, then we would stop, and it’s been getting better as we have kept going.

“Who would have ever thought that we would be here sitting with the Mayor and such great people talking about our band after such a short period of time? It’s a great feeling,” he reflects, “this is the first band that I have ever been in when everyone knows that a song is right, and where we work so well together as friends and musicians.”

To capitalise on the positive mood at the venue this evening, and before the band head off to perform to some dedicated local fans, eager vocalist Danny Porter leans over to ask the Mayor (who is sitting across the table) one very important question: “Do you believe?” and with a smile, David replies, “Oh Absolutely!”

Believe In F.A.T.E will be hosting a “flash mob”-styled event which will see them perform at the MOR Music store at Fossgate on Sunday, June 26 (with the Lord Mayor in attendance) and following their performance in London they hope to record a full-length album.