In our next spotlight interview, we catch up with Kyle Nicolaides of US alt-rockers Beware Of Darkness to talk about the dangers of Earl Grey, touring with The Smashing Pumpkins and the band’s new album, ‘Orthodox’. 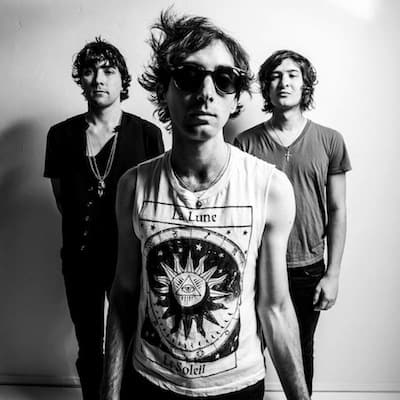 S] Talk us through the inspirations behind the track ‘Howl’?

K] “Lyrically, it was inspired by a John Donne poem called ‘The Flea’, which is about the universal, ageless, timeless yearning and frustration of wanting it, and not getting it.”

S] What about ‘Orthodox’ on the whole; what inspirations went into that?

K] “An unbelievable and almost dangerous amount of Earl Grey, loads of over-thinking, writing some songs here and there and about 10 days’ worth of anti-depressants.”

S] Do you have a favourite space or location to write in, or a time of day that inspires you most – if so, can you tell us more?

K] “It changes, and depends on where I live. In Santa Barbara, I used to write only during the afternoon, but then I moved into a small house in Eagle Rock by myself, and I found, I would only write early mornings or very late at night. I’d start at 9pm and go until 2am or 3am, wake up at 9am, and then write until the early afternoon. Another thing, is that I write collections of songs in creative bursts. I usually only write songs in clusters so they can fit into a collection. What happens is I’ll go a second without writing at all, and then before I know it I have 20 songs finished. Around four songs in, I title the collection. Some of the past titles have been ‘Bleak’, ‘Revelation Revelation’, and ‘Moonfire Riot’. I’ve always been like that. So then what you end up with is a collection of songs that serve as a time stamp of who I was as a person, and what I was going through at that time.”

S] Did you find the truth that you were looking for through the new record?

K] “When all was said and done, the one I thought I was chasing changed. But as soon as I realised that, I found eight other kinds of truth to run after. There’s a beautiful and almost powerless discrepancy in how you plan life, and how life actually turns out. You always have to search and work with an open-mind, and never, ever try to control and choke your future.”

S] How are you looking forward to the Euro dates with The Pumpkins?

S] How have you enjoyed playing some UK shows in the past?

K] “We’ve been to the UK once, and have met some of the kindest and most loyal fans there. The experience was unforgettable and brilliant, and we are unbelievably excited to come back.”

S] You’ve toured with a diverse range of acts, so are there any UK bands that you’re particularly enjoying right now?

K] “Arctic Monkeys are one of my favorites, and I think their record ‘Humbug’ is great!”

S] As a signed band that tours regularly, what are the band’s biggest challenges at present?

K] “Trusting we are on the right path, getting as many people to hear the music as possible, and believing everything happens for a reason.”

S] What are your plans for the rest of the year, following summer?

K] “We will tour America in the fall, and work on the next record.”

S] If you could come up with a Frankenstien’s monster for the Beware Of Darkness sound, what would it be and why? For example, the head of Deftones, the arms of Jet and the legs of Bush, for example?

K] “The head of Sylvia Plath. The eye of Bob Dylan. The nerve system of Fiona Apple. The cock of Kanye West. The legs of Bowie. The arms of White Stripes. The upper body of Led Zeppelin. The torso of Stevie Wonder. The tongue of Bill Withers.”