Blacklisters is currently tearing Leeds’ alternative scene apart with blistering live shows and frenzied punk energy. Their noise rock sound is as progressive as it is heavy and they have spent the last few years working hard (with support from Leeds’ own Brew Records) to take their sound out to the masses. Today and over the course of this weekend, they’ve been gaining national attention as part of the Leeds Festival bill. We catch up with the band (Billy, vocals, Dante, guitar, Owen, bass and Stob, drums) to talk about their tracks, influences and plans for the future. 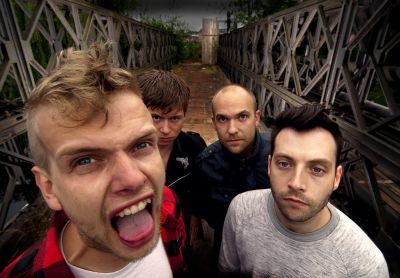 “Our writing process is a bit like pulling teeth”

S] How has your Leeds experience been so far?

Billy] “Great so far! We played last night and that was mental! There was lots of GCSE-receiving kids jumping around to us.”

S] You played last year as well – how was this experience compared to that?

Billy] “Well, last year, we got through on the Futuresound competition which they do in Leeds and it was weird, we played earlier on in the day and it was a very strange experience. In Leeds, most of the people that were there, we all knew and at Reading we just didn’t know anyone! But, last night, there were loads of people who came to see us, who were just coming to have a good time and watch us play.”

S] How has Brew Records helped you?

B] “They have been great. We are a bit of a shambles as a band, and we just sort of amble around, and then Brew have sort of, well, made us do things and found us things to do!”

Owen] “They are our full-time carers.”

Billy] “To be on the roster with bands like Kong and Hawk Eyes who we love is just great, really.”

S] You did a special split 10″ release for Record Store Day which featured the likes of Castrovalva, Dolphins and Hawk Eyes – how did the idea for that come about?

Dante] “It was commemorative of Prince William’s beautiful wedding, and we are big royalists!”

Billy] “We were on a night out with Hawk Eyes and myself and Paul [the vocalist of Hawk Eyes] hit on this amazing idea of having this specially designed commemorative plate and then putting that out there as the cover and releasing it in celebration of the harmonious union of the two. Matt, who plays drums in Hawk Eyes made the cover for us and it’s brilliant, it’s got some black metal vibes!”

S] Did you get any flak for doing it?

Billy] “No, not at all! We got some really good press, actually.”

Owen] “We should have sent one to Buckingham Palace!”

Stob] “It was actually featured in The Guardian as an innovative design!”

S] You guys have done an interactive video for ‘Trickf***’, tell us about the inspiration for that?

Stob] “I just had a cool idea that we could get different bands involved and have them play our song on this video, as they would play it themselves, at the same time. So, people could make their own band using say, the drummer from Blacklisters, the guitarist from Normal Man and the vocalist from These Monsters.”

Dante] “We are going to try to do it again with some other bands and put it out there as an app or as an HTML site so that people can use it on their iPhones. Everyone has one of those nowadays!”

Billy] “It’s also great for us in Leeds, because there are so many great bands here, and we all know one another. So, it’s meant to be a bit of a demonstration of that, because the video has all Leeds bands in.”

S] If you could come up with a Frankenstein’s monster for the Blacklisters sound, then how would you do that?

Billy] “Yeah. We’d better clear that one up. It can’t really be considered a cover!”

Owen] “If you listen to it while having a massive s**t, it sounds a bit like Kasabian. That’s about as close as it gets to a cover.”

S] Are you fans of the Leeds music scene?

Owen] “Yeah, we are big fans. It’s constantly evolving and there’s lots of bands who are friends. It’s really cool. Everyone knows each other, performs with each other and loves each other’s bands. We feel very privileged. There was a time when we were on the periphery, and just looking in…sobbing, but now it’s great to be a part of it.”

S] What’s the plan for the rest of this year and for the beginning of 2012?

Billy] “Well, we’ve got an album coming out in the Spring, which we have recorded and is done. We’re planning a few tours and have one coming up with Japanese Voyeurs – it’s all good stuff. We’re going to do a single in December and maybe one in February as well. We are also going to have a track released on a compilation by Smalltown America Records, and that’s coming out next month on September 19.”

S] Is there a song on the album that you feel like perfectly defines where you are at as a band right now?

Owen] “I think that they all do really.”

Billy] “There are songs on it that you wouldn’t expect to come from us, but they are all within our genre. There was a lot of thought put into it though.”

Dante] “We wrote ‘Swords’, which is like our ‘[Smells Like] Teen Spirit’ a few years ago and it still sums us up better than anything else. It’s like our ‘Alive’ [Pearl Jam] actually! We’ve got a song called ‘Trickf***’ which is like our ‘Angels’ by Robbie Williams [all laugh].”

Billy] “There’s a bit where everything stops on that song and I just scream, and every so often in Leeds, when I do that the whole audience just shouts “You’re just a trick****”, and so that must be a little bit like how it feels for Robbie Williams when he steps out there to do ‘Angels’, except we are in a Basement.”

S] Where does the inspiration come from for your songs?

Stob] “Our writing process is a bit like pulling teeth! [laughs]”

Dante] “Yeah, we are very democratic, so it can be good and bad sometimes.”

Owen] “Billy turns up to a rehearsal sometimes and gets his phone out because he has had an idea when he’s been walking down the street, has had an idea and will just scream into his phone, and then puts that to the mic. It pretty much sounds like someone who has screamed into a phone. [laughs]”

Billy] “It’s usually me just going [at this point Billy mimics a riff with his voice] and then we write a song based on that.”

Stob] “Except they don’t usually sound that good.”

Billy] “It can be difficult when I am in a public place when I have to whisper my riff. [Billy whispers a new riff]”

Owen] “And so, you can see why the writing process is like pulling teeth!”