The Bleeder Project is the driving force behind Gabriel Scott, the mastermind behind the band that originated in San Francisco but is currently based in Germany. The music Scott creates blends electronica and rock sounds within a glittering Gothic shell. We recently spoke to Scott about how his music has helped him to both thrive and survive over the last year. 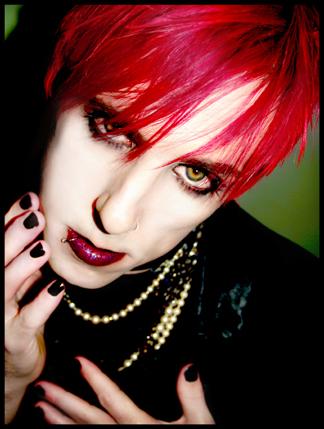 “I want to party with as many humans as possible”


S] What are your plans for the coming months and what do you hope to achieve?

GS] Well I’ve been in the studio here in Germany since late July putting the finishing touches on a new CD that I plan to release in early 2010. From there the obvious next step is to start doing all I can to promote it. Tours, videos, TV, radio and as much press as is possible, so that people are all up to speed with the new music. In fact to some degree that’s already begun. From there I plan to focus on expanding my live show so that the energy is just through the roof. Then take it anywhere in the world where people what to hear me to play. I really want to meet and party with as many humans as possible right now. The live show is what being an artist is really all about for me. And on the other side of that, the only real way to truly experience The Bleeder Project is live. So I just plan to get the record out and hit the road.

S] Can you tell us how your experiences over the last year will feed into new music?

GS] Well for those who don’t already know, I had been dealing with some unexpectedly serious health problems for some time now. Last year I was diagnosed with a type of cancer called Follicular Lymphoma. May 22, 2008 began for me an incredible journey of not only a personal but also social examination of life and death, right and wrong, privilege and poverty, greed vs. good and a century of intentional misinformation and deception around how to be healthy and the right to choose. Not only physically but mentally, emotionally and spiritually as well. And I’ll tell you one thing the answers not a pill. All chronic health issues can be managed, reversed and in many cases, altogether eliminated, completely naturally, through restoring the body’s natural balance and harmony. Cancer, heart disease, HIV, and just about anything else can be greatly improved in this way. But no doctor in any hospital is going to tell you about it. In fact it’s illegal for them to even mention it. It’s not going to make them any money if they do. Do you know that more than 100,000 people die each year from what their doctor prescribed, taken as directed medications in the US alone? And, those cancer treatments kill more people than the cancer does. Highly effective, totally natural health care exists and I’m living proof. And more and more people figure it out every day. You just have to look for it. So yeah, I’ve got a lot to get off my chest and you can damn well bet that some of what I’ve been through has already made it onto the new record and I feel I’ve barely scratched the surface, so there’s surely more to come.

S] What are your biggest personal inspirations and how do these come into play when you write your material?

GS] I think they can be separated into basically four general categories: Sexuality, spirituality, social justice and humanism. I think everything that really effects my heart in a powerful enough way, that I feel I need to process it or discuss it or have some fun with it, comes down to one of these general headings. Sometimes it’s to be one more voice from the shadows screaming ‘Hey this is wrong!’ or sometimes it’s just holding a mirror up to the world I see around me everywhere I turn. And yet, other times it’s to help everyone (myself included) have a way to get some of that anger and frustration out. And still other times, it’s just to help escape it all for a while and have a little fun. Heavy music can be so dreadfully serious so often that I make a point of just trying to have some fun with it sometimes. I think that really comes off in the live show. That’s why I always insist that you’ve never really experienced The Bleeder Project until you’ve seen it live. So many times people have come up to me and said they thought it wouldn’t really be their thing but once they saw it live it all really clicked and made perfect sense, and they’ve become some of my best friends and supporters.

S] How are you looking to develop the Bleeder Project live when you get back on the road?

GS] Although I do have a few ideas about areas I’d like to tweak a bit, I also feel that the live show has probably been my one strongest area as an artist. I feel that I’m still growing as a songwriter and producer but, as a performer I’m a bit of a natural. Don’t get me wrong, there’s always room for improvement. I absolutely love to watch a truly great, seasoned performer work an audience, I ‘always’ learn something new. To me that’s a real thing of beauty. And something that I think 99 per cent of audiences don’t even notice. But the fact is that I also really enjoy the magic of the lights and the fog and the music being so loud you can feel it, and I think audiences can feel how much fun I’m having with it and it get’s a bit contagious. So if there’s any one thing I’d really like to focus on about the show, I think I’d really like to find the right live drummer and a new DJ to join the live show on a more permanent basis than some of my previous band mates. I think that would be great. I’m also really into some of the new songs in the set because the overall energy of the show is now so much tighter now.

S] What are you looking forward to most about possibly unleashing your sound in Europe one day?

GS] I don’t know…That’s a hard one. I love Europe; I’ve actually been living in Germany the last several months. Simultaneously undergoing the natural health care treatments I mentioned earlier but also finishing up the new record. In that time I’ve been so blown away at how fundamentally different things really are here. There are so many things, from the sights and sounds, different cities and countries and cultures all with in such close proximity, to people’s perspectives in general. I guess to pick one thing, that would probably be it. People here seem to be much more open-minded about art and music than in the US. There everything seems to be so trendy like everyone’s trying to sound like the last big thing. Here it seems that fans like what they like and support it. There are so many great bands that US fans have just dropped because they thought it wasn’t cool to follow them any more. European fans just seem more sophisticated than that. Plus most of my favorite artists are from outside the US, so it seems likely that we all share a more common set of influences. So to get the opportunity to perform in some of these other countries would be ideal.

S] How are you finding running your own record label, and what advice would you give to someone who wants to start one?

GS] Ah the label question… (laughs) Well, honestly this is really a love and hate relationship for me. I love the freedom of doing things in a way that feels right to me, outside the oppressive restraints of the corporate machine. And I love the amount of personal and professional growth it’s fostered. However, it’s a very time consuming and financially exhausting endeavor. So for someone who is involved in every single aspect of a project like I am, it can take a pretty heavy toll on you if you’re not careful.

Fortunately I don’t sleep so I have plenty of extra time that most people don’t have, to be all the different people I need to be to get things done. But even at that it still takes me an extremely long time to go from inception to completion. I think I’m at the point now where I’d like to find another label to partner with to take some of the pressure off of me. To let me focus more on just being the artist again.

As far as advice I’d say spend a little extra money and hire good solid agents and reps to handle the PR, booking and marketing. In a biz where so many people are all just talk, a company like JustRockPR who I’ve been building a relationship with for a couple of years now, is worth 10 times what I actually pay because I know at the end of the day they are going to get the job done and more at a fair price. I say, Hire good people and stick with them.

S] If you could have dinner with anyone and listen to your music, who would it be and why?

GS] There’s always like one kid on campus (or in town) who just seems to get it before everyone else. That kid is kind of sensitive, introverted and creative – maybe a bit strange to the outside world and always a little bit of an outcast. They’re always the ones who really define the future of music. Whether an act like mine blows up or remains a fringe cult classic, they’ll always be the ones to find it and to be into it first. They’re the ones who bring an open mind to the show and aren’t afraid to be into it, (in what ever way that is for them). I guess it just seems that they’ve got their finger on the pulse of modern music more than any record executive. And who knows maybe I just feel more comfortable around that type of person? So yeah, that’s who I’d pick. It’d be one of those “freaky” ones over there in the back corner wearing too much makeup, dressed a little too weird, making everyone else a little uncomfortable and trying to make out with everyone – those are the ones I want! That’s who I’d pick every time. And I suppose if David Bowie wants to come, he can too!