In this collectively answered (approved as one) new Q&A, we chat to Leeds-based alt-metal band, Book Of Job (Kaya Tarsus – vocals, Mike Liburd – guitar, Luke Nelson – drums, Chris Norris – bass) about their music and plans for the future. No, we don’t know who said what, sorry. Take it up with the boys! 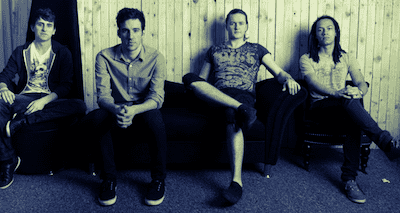 BOJ] “That’s quite hard to say we all listen to different stuff. As cliché as it may sound music is our inspiration, sounds of the swinging sixties, Beethoven, Quentin Tarantino movie soundtracks…the man has a good ear. If we had to name bands we are all really into at the moment it would be The Dillinger Escape Plan, Mastodon, Every time I Die, Converge, Animals As Leaders and many more! If we’re talking classics, then we are all fans of many different influential bands, from The Beatles to Black Flag. We’re even partial to some motown…have you heard ‘September’ by Earth, Wind and Fire? Such a tune.”

BOJ] “Anything! We’re open minded; anything that takes our fancy. It’s true that inspiration can strike at anytime, so you gotta be prepared. Kaya [vocals] wrote one of the songs for ‘Hamartia’ on his phone whilst walking through a supermarket. I think it was ‘Father Cult’. ‘Hamartia’ itself is a concept album, which tells the story of a lonely man trying to change his life by joining a cult. The story of the album is fictitious, but a lot of the songs are inspired by our own life experiences. Some deep stuff, that would probably depress anyone reading right now…but I digress.”

BOJ] “The songs we’re working on now aren’t part of a concept like our first album, so we’re not sticking to a certain mood this time round. Expect something a little different. As for defining our sound it’s hard to say because we’re experimenting with lots of different sounds at the moment like bossa nova and blues; it’s very interesting to see how we can incorporate different styles into our music. We just sprinkle a little BOJ lovin’ on it and it’s our own brand of heavy. We’re trying to perfect the art, it’s like chasing the dragon though, you’ll never catch it, but we’ll keep trying.”

S] What have been some of the defining moments of your career?

BOJ] “Recording our debut album on top of a mountain in Italy is definitely a highlight, we’re small town guys, that was a pretty surreal experience for us! Also playing to some thousand people at the Harrogate International Centre as part of the AMP awards in 2009 was brilliant. We were all 16 and 17-years-old at the time and we had never played to an audience like that before. Our normal type of gig was small pubs and living rooms. Headlining Leeds o2 Academy in 2011 was pretty epic too, as soon as we started playing the whole place descended into hell. There was an epic circle pit!”

S] How has the reception to your debut album ‘Hamartia’ been?

BOJ] “We are very pleased with how it’s gone down so far! Quite a few reviewers have been raving about it so that’s definitely a good start! We were pleased with that, but it looks like we still need to write the all-important masterpiece. A masterpiece to pay the rent. It’s an album that is very important to us and every track is different from the last, but they all come together to form a story. Some people have even been messaging us saying that they can really relate to what the album is saying. We’ve never had anything like that before, so that’s pretty awesome.”

S] Do you have a message for any fans?

BOJ] “Thank you for the awesome support and a big thank you to The Clipper Bar in Camborne, who let us sleep on the floor of their bar when we were on tour. Also, please try the fish there!”

BOJ] “A lot of energy and a lot of sweat. We pride ourselves in our live show, we always want to give the crowd a show they wont forget. We are just four unsuspecting Yorkshire men, who love playing metal. The live show is when you have to step up and give it your all, that’s what everybody expects and that’s what we aim for. Sorry, I just realised I’m starting to sound like a ‘Rocky’ film.”

BOJ] “Keeping up with the internet! It’s how everyone is listening to music these days, so we have to make sure that our music is always available! Which it is, on iTunes, Spotify and Amazon. Soon people will be going to live shows through their computer and we will be playing to a room of webcams, we gotta prepare for that! Also, as a band we always make sure that we are on top of our game in every aspect, writing, recording and the live show. It has to be 100 per cent.”

BOJ] “We want to get our music out to as many people as possible, thats the main objective. We played in a lot of new places last year, especially in the south of England and now that we have released our first album, we gotta come back even stronger with the second. So we’ve got to stay focused. We will hopefully be releasing our first music video sometime soon as well, there have been a few delays in getting it out, but we got our fingers crossed it will be out for your viewing pleasure very soon!”