Chicago is well known for it’s homegrown musical talent, with the likes of Smashing Pumpkins and Rise Against hailing from the Windy City, as well as more recently those pop-rockers Fall Out Boy, but this time Illinois’ largest city has produced an electro band. four-piece Comasoft have just released their debut album ‘A Beautiful Departure’ and want to introduce themselves to new fans this side of the pond… 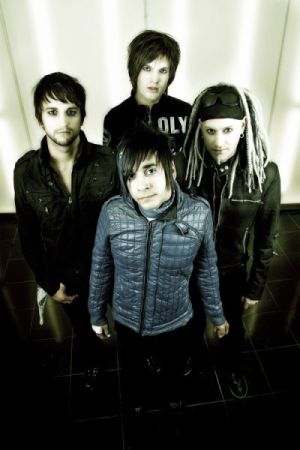 S] How did you guys get together and how long have you been together?

J] I met Dani at a Goth club here in Chicago. We talked about rock bands and ’80s hair-metal for a few months until one night I just asked him if he wanted to play some guitar with me, and we’ve been playing together ever since. We put an ad out for a drummer and a girl we knew contacted us saying (her words exactly) that her friend Tomasz loved 30 Seconds to Mars and would be perfect. He came in to play and was solid on the click, hit every change and generally just knew the vibe really well. Also, he’s sort of a tough-guy and the band was in need of one of those for when we play shady sides of town in the Midwest. Chris was playing guitar in a band we knew and we started hanging out with him a lot: going to parties, raising a ruckus and just generally getting wild. One day we just asked if he wanted to play with us and he accepted. He just fit right in. This line-up has been playing together for about year and a half.

S] Did it take long to put ‘The Beautiful Departure’ together?

J] God yes! A lot of things conspired against that record. The worst was that we were at the mercy of a few of our friends’ schedules to record our demo ideas. We made a decision that we were going to record with a producer, Chuck Macak, who was very busy with what seemed like 200 other bands at the same time we wanted to record. Once we got in and started to track, the sound of the record changed quiet a bit. Chuck pushed us to try some new things and we crafted the songs more tightly. In the end, we were very happy with the product and are proud of it.

S] What inspires your lyrics, especially on tracks like ‘One To One’?

J] It’s funny you ask about ‘One To One’, because everyone asks about that song. It is about this guy here in Chicago who I don’t like. I’m a pretty laid back guy and don’t really pay much attention to what people do or don’t do. I didn’t really care so much, but this guy hates me, so I started to kind of hate him back. The song’s just about me calling him out for being a poser and telling him to just let it go.  I’ve almost punched him a few times but I don’t run into him much anymore. Tommy holds me back whenever he’s around.

Usually, I write lyrics based on the experience the four of us have had.  Pretty much every song relates to some situation one of us has been through.  I jot things down constantly: on the bus or on bar napkins – wherever – just little thoughts about things that happened over the weekend or whenever.

S] Do you get a lot of support locally or do you find your fan base elsewhere?

J] We definitely do best in Chicago. We have a tight crew of friends and supporters here, but Chicago is tough. It’s cold as Hell 75 per cent of the year and that makes people stay inside for months at a time.  Our fanbase seems to be more of a demographic then a geographic location. There is a certain type of people that enjoy our company both on and off the stage, so we focus on being around them as much as possible.

S] What is the Chicago music scene like for you guys?

J] There is a lot of competition. Bands are always contending for good nights and spots. I’m sure it’s like that in every big city. We have a few bands we’re tight with so we stick together and help each other out, and that makes the waters seem a little less shark infested.

S] Do you take influence from the local scene?

J] I think bands make music based on their surroundings. Chicago and New York are cloudy and freezing, and if that doesn’t make it’s way into the tone of your music at least some of the time, then the writers probably never leave the house.  We have a hard time fitting into a genre as a band. We’re generally too electro to be rock and too rock to be electro, so we’re somewhere in between and are usually the odd ball on the bill for a show.  That’s good most of the time, because we stand out more and then it is up to us to win the crowd over.

S] What would you like to see happen in the future with electronic music?

J] I’d be happy if there was just enough of a market to make a living in. There are a lot of great musicians and bands who use keyboards as an accent or main-focus in their art, and it’d be great to see them get more recognition for that.

S] What are Comasoft’s plans for the near future and 2010?

J] We’re working on our next record right now and looking for new management. Beyond that we want the usual I suppose, just world domination, a plush tour bus with a trained pet otter in the shower and an endless tour.