Dangerous! have exploded on to the worldwide punk scene recently with their high-energy aural onslaught of upbeat riffs, spiking drums and raw vocals, signing a contract with Epitaph and performing a storming set at Download Festival. With Sonisphere on the horizon, we share a playful chat with guitarist Nicky J about everything from underwear to zombies via castles. 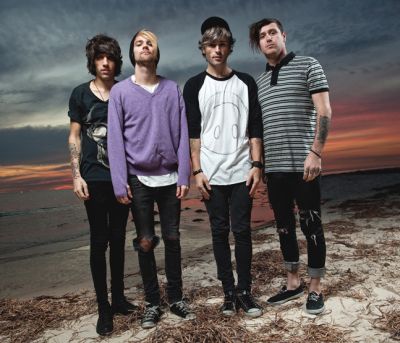 “Download Festival taught me the value of having fresh boxers”

S] How was Download for you guys – from the videos it looked like you had a “mental” time?

N] “Download was fu**ing awesome! It was sunny on Friday, then freezing and raining for the rest of the weekend. Jagermeister brought along a bar made of ice and the temperature inside was below zero. I froze all my braincells in there to protect them from the weekend abuse!”

S] Did you learn anything from that weekend that you will take with you to Sonisphere this year?

N] “I learnt the value of fresh boxers. And yes, I’ll hopefully be taking them to Sonisphere this year!”

S] What are you most looking forward to about the upcoming UK tour and getting to areas like Leeds and Manchester up North rather than just doing London shows?

N] “We like travelling in the bus because we get to see stuff like castles and Stonehenge then make retarded videos for our dickhead mates to enjoy!”

S] Can you talk us through your main musical influences and how they “bleed” into the writing process?

N] “Listening to music together as a band we’re all about high energy stuff, mainly to keep ourselves awake in the bus! We keep stuff like that in mind when we’re vibing and writing. On this tour the most thrashed and played band in the bus would have to be Slipknot.”

S] Is there a specific theme you wanted to get across on the album or with any of the songs?

S] How has the recording process been, in LA – what were some of your favourite experiences?

N] “[It was like] a working holiday. Our sessions at Ulrich Wild’s house in Silverlake were great. We got up at midday everyday and rode bikes along Sunset Blvd in boardies and flip flops to the studio. Having breaks in the sun and overlooking the Hollywood hills between takes was sick!”

S] What are your main aims for the rest of this year?

S] If you could soundtrack any existing film with the music of Dangerous! Which film would you pick and why?

N] “That’s got to be a ‘Serbian Film’. It pushes the boundaries!”