A few years ago I (Steve Nash), found myself grinding out a retail job in a bookshop on one of York’s popular tourist-filled streets. Each evening as the clock slowly clicked the seconds past, I found myself desperate to be anywhere else; the silence of the oft-bereft store becoming a deafening soundtrack to my week. Except that was, on a Sunday. On that lazy day each week, as I blinked myopically out at the towers of remaindered books, an affable Scottish gent would set up a stool outside our window and privilege us with the soothing, and haunting gift of his music. Little did I know back then, that this was a living legend of the York music scene – David Ward Maclean. 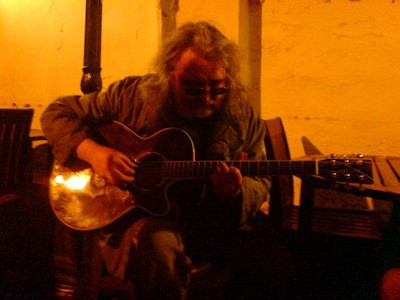 We sit down with the venerable troubadour to discuss his life in music so far, his influences, and anything else he cares to share.

It seems to us, from our ceaseless efforts to experience any and all musical happenings throughout the north, that David is something of a centre to our bright musical universe, a man who brings people together from the whole spectrum York’s multifaceted musical scene. He dismisses this with characteristic modesty however as he says: “No, I don’t see myself as the centre of anything really. I have a lot of great musical friends, but they’re as much the centre of their universes as I am of mine.”

Always keen to hear about artists’ views of York we found out that this very month marks a special milestone for David. “This October marks 25 years since I first came to York,” he explains. “I came from Stirling to do a music degree and ended up staying and starting a family, and I realised that just by busking you could actually make ends meet.” Starting a family whilst engaging in a degree is not often an immediate goal of students, but with trademark grace and good humour David is quick to point out that “I never regretted it. I love this city.”

When a musician earns fans as diverse as Jethro Tull, Noah Georgeson, and Benjamin Francis Leftwich, you know it is worth sitting up and paying attention, and you’d be forgiven for assuming that David’s precise and elegant songwriting has been developed through a non-stop 25-year (at least) practice. However, as he explains, the writing of original songs is something that David only returned to in more recent years. “Until 2004, nobody knew me at all in terms of the music scene in York. In 2004, I started writing songs again which I hadn’t done for some 14 years. My wonderful friend Chris Helme recorded some demos for me as I had been very disillusioned with recording.”

The mention of another living legend of the York scene (Chris Helme) made us wonder what it was about York that keeps Dave so enthused about the city musically. “I like the different styles,” he begins with a glint in his eye. “All the different styles of the musicians in York, and the open mic scene because you never know what you’re going to get. Rob Loxley Hughes, Mark Wynn, and GT Turbo are just a few who have helped that scene to really thrive.”

As a well-known and much-loved busker on these ancient streets, we were curious to hear about the process that got David back indoors singing to people with pints rather than shopping bags. “I’d only played in a pub twice in those 14 years before I was writing again. When you get new songs, you also get the urge to try them out and see what other people think of them. Otherwise they’re just the tree that falls that nobody hears.”

As man synonymous with York, in spite of his soothing Scottish brogue, we asked if there was a particular place within the city walls that he most liked to write. “My head,” he laughs. “It’s the perfect portable venue. My writing has slowed since 2004, it is more considered now. But back when I started writing for a few months, they all started pouring out.”

David’s current album, ‘The Wreckers’ is a shimmering collection of 11 powerful and soulful tracks, and with so many more songs also in the now prolific man’s arsenal we asked if there was a particular track that he sees as uniquely significant. “There are a lot of landmark songs. But they all say something, they’re all like little bells and if they don’t ring back then they get put back in the melting pot and get melted back down. ‘Strangest Man’ is an important one for me though. I met this guy, and he was a street painter, and he was such a nothing, but he was really weird. It was almost strange how nothing he was but he was just a really, really weird guy. And suddenly out of the blue came this guitar part, and then, over the top, came the lyrics. I sang it through three times there and then because I couldn’t believe I’d written it.” He’s quick to qualify this with trademark humility, “Not that I couldn’t believe I’d written some amazing song, I don’t mean it like that. But it was just bang! Out of nowhere.”

Of course, we’d be completely remiss if, while we had the great man’s ear, we didn’t try to steal some wisdom from him, so we pushed him for some advice for young musicians. “Be yourself and have no shame,” he says. “Because why should you have any shame? I don’t have a lot of advice though because I don’t know if there is anything you could learn from me.”

With the aforementioned ‘The Wreckers’ receiving such positive feedback we asked what we could look forward to in the coming year or so. “It’s been over three years since we did the record. I’m pleased with it, although I had terrible throat problems while we were recording it. I’m so thankful to all the people who were involved with the album though, from photographers, to musicians, and of course, Carl Hetherington, who it just couldn’t have been made without. For the future though, I’ve got 70 songs ready to go, an immensely personal side project, and an album of covers that I could record in literally two days.” David then reveals his ambitious hopes for this abundance of material he has accumulated, “I’m setting up a Crowdfunding campaign for all four albums, so my hope is that by the end of next year, I might have four albums completed, but we’ll see.”

Typically selfless, David’s ambitions don’t stop with his own personal concerns as he raises another question regarding his beloved city as a whole. “Why isn’t there a York festival, like the Fringe in Edinburgh?” he laments. “This is the most beautiful small city in the country, I don’t care what anyone says, and just think of the venues. You could have big acts up at the Knavesmire, and then there are so many smaller venues but also churches and places like that.”

A festival that truly availed itself of all that York had to offer is a truly wonderful thought and we can only hope that David sees his wish come true. So, from the future to the past, we wanted to know how David Ward Maclean would like to be remembered as he looks back over his career. “To try!” He laughs, before getting a little more philosophical, “I’m old school. I believe that every generation hears the key of G in a different way. But as far as my contribution goes? Possibilities and solutions – you can have a complicated guitar part if it’s balanced. You can have obscure lyrics if you sing them with heart. I’m ambivalent, if you sit and philosophise too much about things like altruism, you just argue yourself into a corner and then you don’t do anything.” A man of ceaseless grace, David leaves us with his final wish, “I just hope I’ve given a little something back.”

David Ward Maclean, may be seen as one of the older heads of the York music scene, but the truth is, despite the years that have gone into the honing of his knee-weakening craft, that recording-wise he is still in the early stages of what we hope will deservedly be an incredibly productive and enriching career. A true gentleman, and there aren’t many of those left.