In our latest band spotlight interview, we have a short chat with Dead Letter Circus’ vocalist Kim Benzie about their recent tour of the UK! 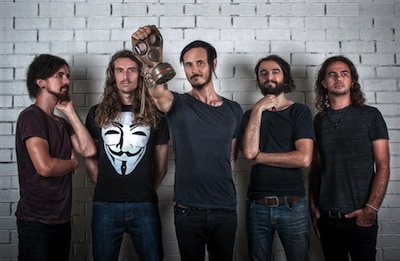 K] “The UK was great! Monuments were an amazing band to watch every night and the people who came out were awesome.”

As a successful band who can tour the globe, what are your biggest challenges at present?

K] “I guess just staying afloat financially with the state of the music industry at present and keeping the music fresh.”

S] Outside of music what are some of your greatest inspirations?

K] “I love travelling. If I were to be free of the band to do whatever I wanted, I would definitely be a wanderer with the simple goal of casting my eyes over as many places as I can.”

S] Talk about the track ‘Lodestar’ and the inspirations behind that one?

K] “‘Lodestar’ was the first song that the new version of this band wrote. We didn’t consciously set out to do it at the time but stepping back and listening now, it feels like we needed to write a song that sounded quintessentially Dead Letter after having Rob [Maric] leave the band. The result kinda speaks for itself.”

S] Is there a constant theme and set of ideas that dominate your music on this new album?

K] “Lyrically, the album explores what it is like to be awake to the true mechanics of the world today and the emotions associated with it. No one trusts the government, everyone knows that there is a system of control in place, but feel powerless to actually make a change. The reason they feel powerless is because we feel so cellular and separate from each other. We are the many, and we are actually controlled by a very clever few. If we remember that, the change will come.”

S] What are the most important albums in your life, aside from your own?

How would you like to be Dead Letter Circus to be remembered – what do you want the legacy to be?

K] “I want us to be remembered as the band who never recorded a bad song.”

S] Why do you get out of bed in the morning – what specifically motivates you to keep creating?

K] “I feel very blessed to be the vessel for this amazing music. I want to see what the next evolution in it is.”