An evening of ghosts and ghouls alike, it is almost the Eve of Hallows and it brings to you, our purveyors of all that is new in music, an opportunity. 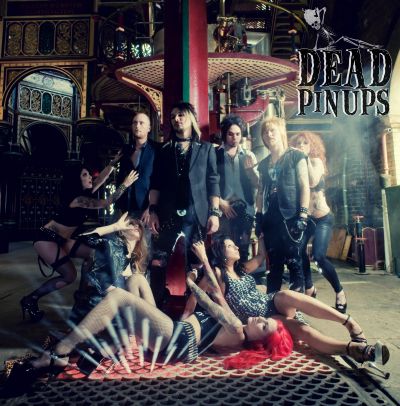 So gather round and listen hard for an opportunity such as this arises only once in a full moon. Our humble guests, please take your seats and open your minds for a gift is about to be bestowed upon you and it is one which should not be taken meekly.

A début EP – by which we mean ‘Epic Proportions’ – is brought to you by a band who have been waiting for their moment to come. Their little known musical tendencies should not be disregarded, but rather, held in high-esteem for tonight is the night, that the Dead PinUps take charge of your very souls. Turn out the lights and turn it up loud – now is their time.

Enough of the theatrics, as this band are guaranteed to bring enough of that to a stage near you in the fast approaching future. Undead singer, guitar slinger Samhain Carter-Brazier; formerly of Little London; graced Sonisphere stages with their presence two years running, first on the Bohemia stage after Corey Taylor in 2009, and opening the Jagermeister stage in 2010.

This is a début to be reckoned with – huge sounding opening track ‘Drone Zombie’ gives you the perfect 80’s b-movie horror flick soundtrack, with dirty, sandpapered vocals and a chorus that sticks. ‘Bump in the Night’ rides a similar train but with a deeper, darker element. Riff heavy, it carries conceptual guitar sounds with an intensity which wouldn’t be lost on a stage with ‘City Of Evil’-era Avenged Sevenfold.

Comparisons have to be made to the recently departed London band, Slaves to Gravity but they carry a deeper, darker element with aggressive drums, heavy duty riffs and a dirty as fuck attitude. Edgy, original and distinctive, the Dead PinUps coaster is about to make its descent, make sure you’ve a ticket to ride or be left in its wake.

More information on Dead PinUps is available on their website.